It is beyond mystifying why some insist on holding on against all good sense, all that is dignified, all the odds, and all that is helpful to internal constituents and the country. It is my belief that if a man (or woman) truly loves and cares for the people that once looked up to him for representation, and they have since signaled in the clearest terms that they have gone in another direction with a new hope, then that man makes as quick and as graceful a departure as is possible. The problem is that nothing of the sort is happening. Rather, there is this spectacle that is played out publicly that undermines and devastates a process that nobody has challenged, given the cleanliness and seamlessness of it. There is this derailing, I would even say sabotaging.

For all these reasons there are these circumstances, where knowing insiders have relayed to me that on every occasion that the name of the passed over one comes up, men are reduced to cursing profusely. Some are asking why? I am asking myself quietly: who does he represent? Who would want him to stick around, and for what purposes? Many have said leave gracefully with a smooth exit strategy. I toss all of that in the garbage can and dung heap. My thinking is taking shape.

My thinking suggests that something meaningful is involved, and it is not paltry. Oil companies in general, and Exxon in particular have perfected the art of making men seeing matters their way, and performing according to plan, as expected; maybe even demanded. Such are the hard bargains-deals with the devil-that have taken place in other oil places. The interests and welfare of the people? Let us get real and quickly, they function as necessary cannon fodder. Who are they, if nothing but a faceless, voiceless, helpless mass of humanity that is gullible, dependent, and caught between the forces of memory and history as they interpret it, and new realities of which they are at sea?

I will concede that the benefits associated with politics in this country have their heavy, irresistible attractions; there is nothing about noble public service attached to offices or those who hold them. But those benefits pale into nothingness, when what Exxon could make possible through the channel of a treacherous and collaborating PPPC leadership. There is a history there, too. I ask Guyanese to cast their minds back a little, and there is a precedent and a parallel. Those are so close to what is being repeated today that there is little room left for discussion or argument. The conclusions were of PPPC arrangements by the barrelhead that hobbled one before, that left him speechless, powerless, and all but useless. Indeed, history repeats itself, and in color. The color is green. Take a poll, or the temperature and sentiments of supporters, or revisit the shabby results of that time, and there it is, the same story at work today.

There was no oil magic at work back then, it was all the power of PPPC paper, and it was more than enough to cause bulging eyes and bulging in other things. In view of the ugly state of Guyana’s environment and politics, compromised PPPC leadership is always on the hunt for people of standing everywhere, with whom it could do business. It goes without saying that it is not the type of business that is memorialized in documents and records; or the kind that accrues on the plus side of either recipients or country interests. There was plenty then to dole out and share around, and make things happen. As an aside, look what happened at some polling stations in Guyana during the last year’s elections wars. It was not goodwill or relationships at work, but good old capitalism. The same kind that bought one John F. Kennedy the U.S. presidency, compliments of Mayor Daly and Cook County, Chicago.

Now if there was much then for political emergencies, then I assure one and all that there are countless multiples of those figures and levels available today to put to work. Some men become victims of circumstances, hostages to their own well-known histories, and addicts to what they find it painfully difficult to resist. Saying No is not an option since the litany of in for a penny translates into being unable to resist a pound now. Many of them, countless stacks of them, all neatly wrapped in fresh, crisp rectangles with big numbers embedded in and embossed on them.

Yes, I hear about talks, and then more talks. Talk, talk, talk. What the hell is there to talk about, other than leave and don’t let the door knock off the feet. It is a tad embarrassing for me to write about this, spend time on this, when there are so many other crucial issues hanging and begging for immediate attention. In fact, I sully myself when I venture into waters such as these about who should go and who should stay. Of whom should stay and rise to prove the mettle made of, and to bring some measure of belated accountability and answerability on those many things that trouble so many, prompt so much anxiety in many others, and leave this society so much lesser for it.

As I prepare to depart, I recall that glittering, sweeping passage from the good book, which I paraphrase to suit this moment in Guyana and this parting message from me today. There is a time to stay and a time to go. At another time, before things deteriorated, the refrain might have right been -please stay, don’t go. Today, and of that, let there be no doubt, the groundswell has grown into a tsunami. It has a powerful rushing sound, as though a million voices whisper at the same time: please go, don’t stay. Stop balking, there is no more time for talking. It is of a guest that has overstayed and worn out welcome.

Sun Jan 16 , 2022
Support Village Voice News With a Donation of Your Choice. Parents of school-aged children living on the East Bank of Berbice in Region 6 (East Berbice/Corentyne) have reported that they are reeling from hardships created by the abrupt removal of the school bus which had been assigned to the area. Residents said their troubles began on the recent opening of […] 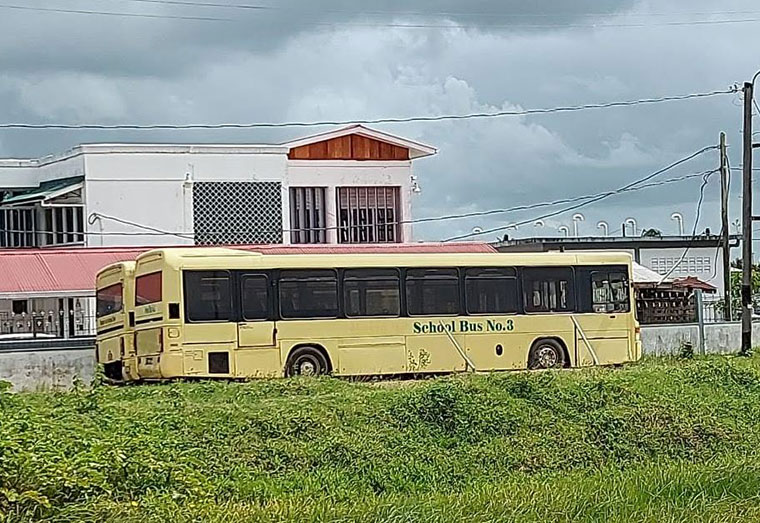