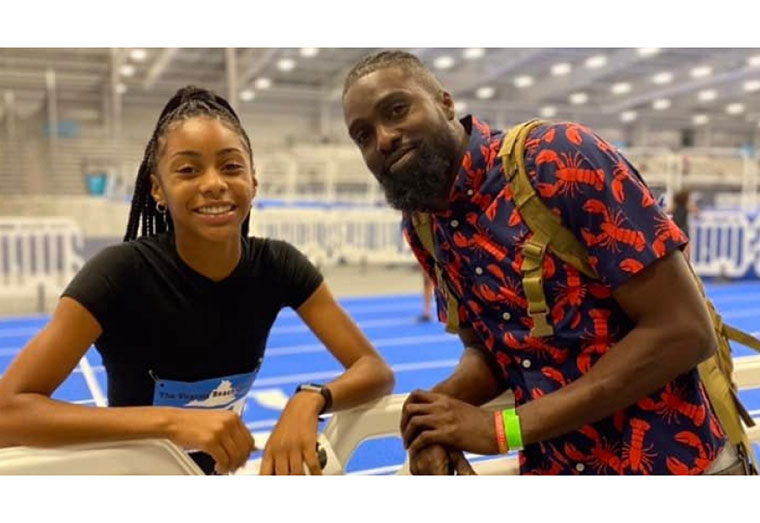 (SPORTS MAX) When 13-year-old American prodigy D’Asia Duncan steps onto the track at the Gamecock Indoor Challenge in South Carolina on Saturday, her Jamaican coach Xavier Brown is expecting to see further signs of improvement from the youngster, who hopes one day to be like her heroine Allyson Felix.

Brown, 38, has been coaching the teen since the summer of 2020 after the Geneva Christian School eighth-grader moved from Connecticut to Orlando, Florida, to maximize athletic and academic opportunities.

It was at a meet in Orlando where she first met Brown, who appeared ‘out of the blue’ but who would subsequently relieve her mother, Marilyn, of the responsibilities of coaching the young multi-sport athlete. A straight-A student-athlete, D’Asia is also a three-time national record holder, having established age-group records in the 60m hurdles, 100m hurdles and the pentathlon. She is also a 14-time national champion and 28-time All American.

She has also shaved fractions off her 800m time which she has lowered from 2:24 to 2:22 and she opened her season with a 9.18 clocking over 60m hurdles after not competing indoors for several years.

Brown expects to see improvements across the board on Saturday.

“So we are looking for good things from her tomorrow running the hurdles, the 400m and also jumping a longer distance.”

In Jamaica, Brown was not as heralded a coach as Glen Mills, who coached him to CAC 200m gold in 2006, Stephen Francis or Maurice Wilson, but before he migrated to the United States a few years ago, he had steadily built a reputation as a respected track and field coach, commanding the respect of his peers and athletes along the way.

He got his breakthrough working with sprint hurdler Shermaine Williams, who was then being coached by Lennox Graham. Graham, now an Assistant Coach at Clemson University, coached at Kingston College in the early 2000s before migrating to the United States to transform the track and field programme at Johnson C. Smith University where he guided Williams’ sister, Danielle, to multiple NCAA Division II titles and eventually to the 100m hurdles gold medal at the 2015 World Championships in Helsinki.

Back in 2011, while working as an assistant to Coach Maurice Wilson at the GC Foster College, Brown got the opportunity to coach a couple of Australian sprinters to personal best performances during a successful exchange programme. Since then he has coached at Camperdown High School, Calabar High School, Clarendon College and St Jago High School.

Given his experience and an eye for identifying emerging talent, shortly after migrating to the United States, Brown quickly saw in D’Asia, something special.

“The first time we met in person was at a track meet in Orlando, she was doing the high jump,” Brown recalled.

“D’Asia has a lot of potential. She is a natural talent and with the guidance of her mom and me she will have a lot to offer to the sport in the future.”

However, it was a chance interaction over social media that Brown got in touch with Marilyn, who was then coaching her daughter to one day realise her dreams of becoming a professional and ultimately an Olympian.

“Xavier had been keeping up with D’Asia on social media and would give some feedback via inbox which I would read, respond to and take into consideration because he was truly on point with his observations,” Marilyn recalled.

“He came from Jamaica to Orlando around the time she was preparing for Regionals and advised us that he would like to come to see her compete. Ironically, that weekend we were competing next to him, so we invited him over. He was on time, attentive and I quickly noticed he had an eye for all the areas that needed improvement.

“It was at that point we considered having him join our team to alleviate me from coaching and so I can focus on the parenting aspect of it. We extended the offer, he accepted and had immediately has been present, dedicated, patient, cautious and offered lots of knowledge in a variety of areas.”

For D’Asia, Brown becoming her coach was also a bit of a surprise.

“My mom said I had a supporter from a different country coming to my meet in Orlando for regionals and when I met him, he helped me a lot and I did good. Then another day my mom told me that she wanted to have him work with me longer because he knew a lot and could help us, plus it would help her and let her focus on things at home and just being a mom,” D’Asia recalled.

Notwithstanding the circumstances, the pair hit it off immediately.

“My mom was coaching me because we were new to Florida and it worked better to be an unattached athlete, but she really wanted to find me a good coach that was smart and had the experience to help me with different stages of life and track,” she said.

“I remember us talking about how he just showed up and helped us and was so nice. We went on the internet and social media and was like ‘oh wow, he was here and did this and that, so yeah, we prayed, and she picked him for long term coaching and he’s been a good fit ever since.

“He’s a good coach and he definitely knows what he’s talking about. He works me hard but not too hard.”

According to Marilyn, Brown has also exhibited the kind of exemplary qualities that makes him so much more than she could have ever imagined. More than just his coaching acumen, she found Brown to be of sound character as well.

“I knew Xavier was an adequate fit because despite having his own stripes of being an outstanding sprinter, a credible coach with an impressive resume, travelling and coaching around the world as well as training alongside some other outstanding Jamaican athletes, he was humble,” she said.

“Xavier came to us simply wanting to help. Generally, I would be reluctant because he came out of nowhere, but I remember praying for someone with good intentions, no ulterior motives and knowledge to come our way and then he popped up. It was one of those things where you just know. He wasn’t boastful, or egotistical trying to convince us of his importance. In fact, I only found out who he was after doing extensive research on him before asking him to join D’Asia’s team.

“He didn’t speak much, but when he did it was lots of knowledge and powerful. I truly liked how careful he was with making sure we properly nurture D’Asia – not rushing the process in any way – amongst sharing reasonable and good goals and how to go about them in the future.”

Marilyn believes Brown is just what she and D’Asia needed at this stage of the latter’s budding career.

“So far, I mean he really puts good workouts together that cover many areas, which is hard to do as she is multi-eventer, hurdler, jumper,” she said.

“He makes sure the rest and recovery are there, he puts great stretches and drills together that are not only beneficial now, but for the future, keeps her mind strong and attention on her.

“Xavier truly thinks long term when it comes to her mental, spiritual, emotional and physical well-being which I know will prove to work out. In the time we’ve worked with him, he helped bring her to be a two-time National Junior Olympic winner and so far, she is right where we trained her to be for the early season.”

Meantime, D’Asia, who plans on one day becoming an Orthopedic surgeon and businesswoman, is focused on what is immediately before her, dominating her environment.

“D’Asia’s short term goals are to keep properly balancing and excelling with academics, athletics as well as her personal life. Within track and field, she hopes to keep dominating on a youth/high school level, defending national titles and hoping to break more school, meet, national or even world records all while having fun, staying mentally strong and injury-free,” said Marilyn.

“(Her) medium-term goals are to keep properly balancing while excelling in all areas of her life. She hopes to attend a prestigious college that will help her get closer to her long-term athletic goals and overall career.”

For Brown, the task, for now, is simple.

“My short-term goal for D’Asia is to get her stronger and faster and also mentally prepared for what is to come, day by day.”

Sun Jan 9 , 2022
Support Village Voice News With a Donation of Your Choice. (BBC) Australia’s Usman Khawaja hit another classy century to leave England needing to bat out the final day to save the fourth Ashes Test at the Sydney Cricket Ground (SCG). Khawaja made an unbeaten 101 from 138 balls, to follow his 137 in the first innings, as Australia set England […]