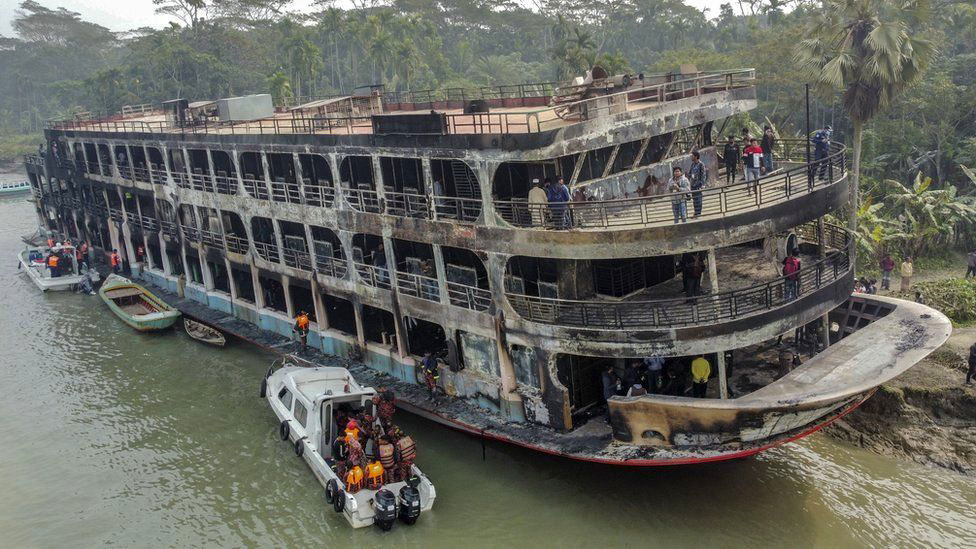 (BBC NEWS) At least 37 people have been killed and about 100 others injured after a packed ferry caught fire in southern Bangladesh, local officials say.

The blaze on the three-decked vessel started mid-river near the town of Jhalakathi as it sailed from the capital Dhaka to the town of Barguna.

Some of the victims drowned after jumping into the water.

The number of casualties in Friday’s disaster is likely to increase as many of the passengers have severe burns.

As many as 500 people were reportedly on board the vessel.

The fire is believed to have started in the engine room and quickly spread as the ferry travelled along the Sugandha river in the early hours, fire services official Kamal Hossain Bhuiyan told local media.

The blaze reportedly continued for hours.

One passenger who survived, an elderly grandmother, told AFP news agency most people had been sleeping when the fire broke out.

“We were sleeping on a mat on the ground floor deck,” she said. “My nine-year-old grandson, Nayeem, was with me, he jumped into the river. I don’t know what happened to him.”

Another woman, who was travelling with her father, sister and six-month-old nephew, said the young child had gone missing.

“When the fire broke out, I gave the baby to a man. He was trying to save the baby. But now we can’t find them,” she said.

A man who was on board the ferry said the vessel appeared to have issues with its engine before the blaze and later became filled with smoke.

“The ferry’s windows had curtains, and these curtains trapped the smoke,” he said.

It is common to see ferries capsize in Bangladesh. Passengers are loaded on to poorly maintained boats, with poorly trained crews, often way above the vessel’s rated capacity. Hundreds have drowned in the country’s rivers in the past 10 years. But the fire that engulfed this ferry adds a new layer of horror to the story.

The fire is thought to have started in the engine room, spreading rapidly, and sprinklers or other safety measures may have had little effect.

This and other tragedies stem from a failure of enforcement. Operators are rarely punished and so defective ferries continue to carry hundreds of passengers every day.

Nearly 30% of Bangladesh’s 170 million people commute through river routes. But they are mostly poor Bangladeshis, and the government has not made it a priority to tackle lax safety standards. Ferry disasters are so common that there is little international outcry to pressure them, and it is widely believed that the ferry owners are politically powerful.

The result is hundreds of poorer Bangladeshis risking their lives just to make it to work.

A special committee has been set up to investigate the incident, according to reports.

Ferry accidents are not uncommon in Bangladesh, with incidents blamed on overcrowding, and poor maintenance and safety standards in the country’s many shipyards. Vessels often sink in bad weather.

In June 2020, dozens of people were killed when a boat carrying about 50 people capsized near Dhaka.

Sat Dec 25 , 2021
Support Village Voice News With a Donation of Your Choice. —as PM Holness signals Cabinet shuffle (JAMAICA OBSERVER) Christopher Tufton, the minister with responsibility for health and wellness has emerged among political watchers as the most likely to be reassigned when Prime Minister Andrew Holness shuffles his Cabinet early next year. Political watchers yesterday zoomed in on Tufton’s ministry and […]