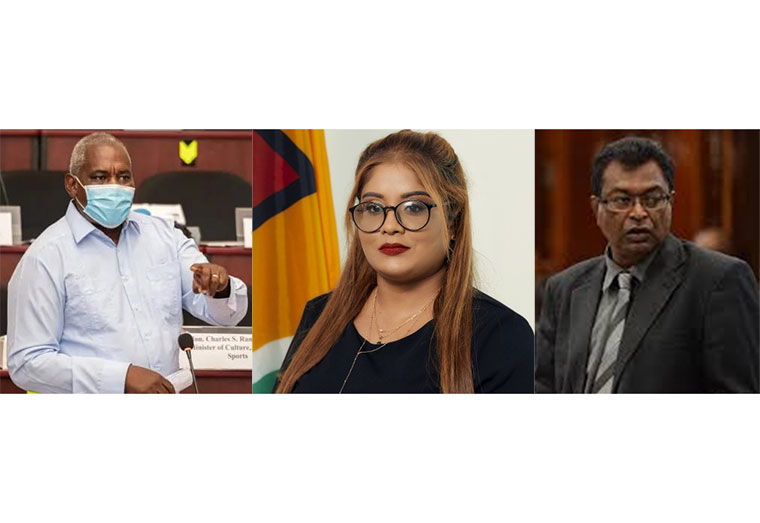 Bowing to public pressure, the Government, on Monday, removed Clause 3 from the Police (Amendment) Bill which was intended to provide for the collection of DNA samples – a move which saw the Opposition offering its full support for the Bill as amended.

The controversial clause sought to amend Section 25 of the Principal Act to make provision for the use of Deoxyribonucleic Acid (DNA) information for the purpose of identifying persons in lawful custody, however, the proposed amendment received widespread condemnation when it was introduced last June. The Guyana Bar Association, in registering its objection, said while DNA evidence is a useful tool in proving the guilt or innocence of an accused, the collection of such information merely on arrest, without consent or order of a Court, can be dangerous.

In presenting the Bill for its second reading in the National Assembly on Monday, Minister of Home Affairs, Robeson Benn said after much consideration and criticism, the Government has taken a decision to amend the Bill by deleting Clause 3 – a move which saw the Opposition offering its support.

The other two clauses of the Police (Amendment) Bill – which also raked in support from the Opposition – will see ranks within the Guyana Police Force using “less-lethal weapons” in the execution of their duty.

Clause 2 seeks to amend Section 2 of the Principal Act by inserting two new definitions for the terms “arms” and “less-lethal weapons.” Under this new legislation, which was passed on Monday, “arms” is defined to include less-lethal weapons which include nightsticks, batons and clubs; chemical irritants; conducted electrical weapons; kinetic impact projectiles; and water cannon.

Addressing his colleagues on both sides of the House at the Arthur Chung Conference Centre, Minister Benn said often times challenges arise during arrests of individuals, and the intention is for the police to use less-lethal weapons during such circumstances.

“We want to avoid the resort of having to go to the use of firearms. We want to go through a staged response in respect of the use of force by our police, and so this is why these amendments are proposed,” the Home Affairs Minister explained.

Noting that the use of batons and chemical irritants by the police is nothing unique, Minister Benn told the House that the amendments will go a far way.

“The use of these resorts will go a long way in reducing the friction, the tension between the police and persons who may become engaged with the police for arrest, and will also reduce the possibility of injury, serious harm, or even death, and this is why we use the term less lethal -force,” he further explained.

A Partnership for National Unity + Alliance For Change (APNU+AFC) Member of Parliament Dawn Hastings-Williams, in supporting the amended Bill, said the inclusion of less-lethal weapons was long overdue.

“We have to reflect in our laws, the changes and norms of society, and we can’t be stuck in the old ways doing things in the old manner with the old tools when society and times have changed,” he posited.

He told the House said the use of force by the police should always be proportionate and appropriate, and the Bill provides for the police to be better equipped to respond to varying reports and challenges. On that note, the Government MP said not all case warrant the use of lethal weapons such as a firearm.

Opposition MP Geeta Chandan-Edmond, in offering her contribution, said she was pleased to see the removal of Clause 3 from the Bill. She reasoned that while DNA sampling is a part of modern investigative techniques, the issue at hand much be contextualized.

“We note that what was attempted was to adopt these measures in a context and circumstance of a politicized Police Force and a nation which has no guarantee that we are dealing with a government that will not be tempted to take any data procured and use it for nefarious or political purposes,” Chandan-Edmond said.

The Opposition MP said she is thankful good sense has prevailed.

Turning her attention to the insertion of less-lethal weapons in the Principal Act, Chandan-Edmond said while it is important for ranks to be well equipped to prevent crimes and apprehend criminals, they must be equally trained to use the equipment provided for under the law.

“We have noted that internationally Tasers have been responsible for the deaths of several individuals as a result of the improper training of law enforcement officials. The inappropriate use of Tasers has had an impact on the lives of individuals and when used as a default choice where other tactical options, such as communication have been more effective, this has also led to reduction in the confidence in law enforcement agencies by citizens internationally,” the MP reasoned.

Similarly, she said irresponsible use of chemical irritants can inflict permanent damage to the bodies of citizens. As such, she emphasized the need for training and responsible use.

Former Public Security Minister and Opposition MP, Khemraj Ramjattan also offered support for the Bill but with the deletion of Clause 3.

Like Chandan-Edmond, Ramjattan, underscored the need for policemen and women to be better trained to utilize their tools and equipment.

“We saw what happened to Orin Boston. Orin Boston in his room, with his wife and they gone in there with big guns; they didn’t take any other non-lethal or even ask CID detectives at Suddie, arrest that man. He was not a known criminal but with all of the powerful lethal weapons they had, somehow they were punctured mentally or intellectually and rushed into the man’s house and started shooting,” he pointed.

The legislation, he stressed, must be accompanied by training in the professional use of the less-lethal weapons.

Tue Dec 14 , 2021
Support Village Voice News With a Donation of Your Choice. —Awards scholarships to two GDF ranks at Camp Everard Christmas Luncheon President Irfaan Ali said that his Government will make the necessary investments in a number of army bases around the country to improve their technological capabilities, with the aim of advancing the educational development of the ranks. The Commander-in-Chief […]