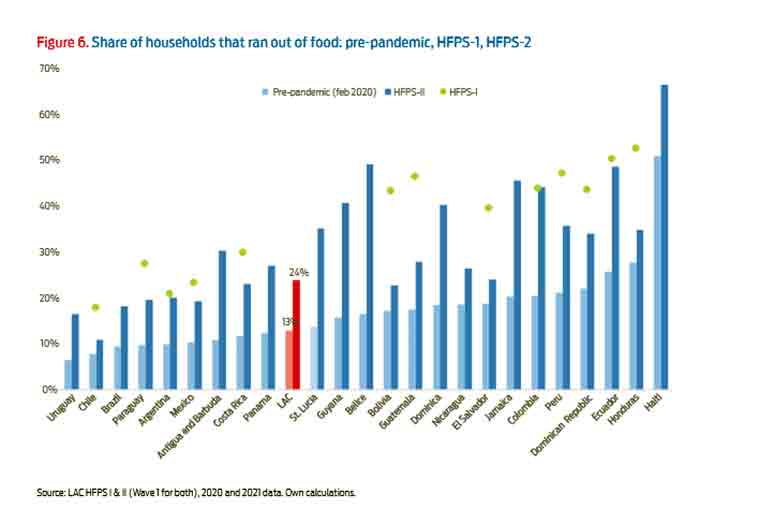 —World Bank Report says many households run out of food, other resources

A World Bank report has listed Guyana among several other Caribbean and Latin American countries that face particularly worrisome levels of food insecurity and that twice as many households here have run out of food due to lack of money or other resources.

Titled “An Uneven Recovery: the Impact of COVID-19 on Latin America and the Caribbean”, the Bank said as a result of diminished resources, nearly twice as many households in the region suffer from food insecurity compared to before the onset of the pandemic. “This is evidenced by the fact that 24 percent of households across LAC reported having run out of food due to lack of money or other resources, as opposed to 13 percent before the start of the pandemic,” the report which was released on Monday stated. According to the Bank: “All countries appear to be worse off after the pandemic, and those with higher inequality and poverty have endured the largest increases in food insecurity.”

The Bank singled out Caribbean countries such as Haiti, Jamaica, Dominica, St. Lucia, Guyana, and Belize that face particularly worrisome levels of food insecurity. “For some countries, a visible recovery with respect to the outlook in mid-2020 is observed: Bolivia, Guatemala, and Honduras have displayed the most significant declines in the incidence of food insecurity (21, 18, and 18 pp., respectively). On the other hand, the situation in Argentina, Colombia, and Ecuador remains worrisome yet stable, with households facing similar levels of food insecurity as they did at the onset of the pandemic in 2020,” the Bank said.

Back in September the Bureau of Statistics of Guyana, reported a 14% increase in food prices on the local market. Based on the Consumer Price Index released in July, 2021, between December 2020 and July 2021, the price of food increased by 14%. Costs associated with Transportation and Communication also increased by 1.8%. According to the monthly report, miscellaneous goods and services also increased by 2%. “Prices data are collected from various sources on a rigid and systematic time schedule both weekly and monthly. A data collection questionnaire is used to collect prices from various Municipal Markets, Gas Stations, Supermarkets, Stores and Other Outlets,” the Bureau of Statistics explained on its website.

Renowned Guyanese Economist, Dr. Clive Thomas said while the increase in food prices is not unique to Guyana, the Government can do much more to bring down the price of food as well as the costs associated with other goods and services. During an appearance on Politics 101 – a virtual programme hosted by Political Scientist, Dr. David Hinds – Dr. Thomas said food prices have increased globally as a result of the ongoing Coronavirus (COVID-19) pandemic. Here in Guyana, Dr. Thomas said the situation has been compounded by unprecedented floods which devastated agricultural areas throughout the country.

It was explained that the torrential rains, which resulted in widespread flooding, have disrupted the supply chain and triggered an increased in food prices. It was noted that during the early stages of the COVID-19 pandemic, Emergency Measures instituted had resulted in industries grinding to a halt. The labour force, he said, was severely affected as well as the Transportation Sector.

He said while the pandemic and extreme weather conditions are not unique to Guyana, the Government should have put a number of systems in place to bring down food prices in the local markets. It was pointed out that some Farm-to-Market Roads are in desperate need of repairs while some agricultural areas require Drainage and Irrigation Systems in place to minimize the possibility of floods. Weighing in on the issue on “In the Ring,” former Minister of Finance, Winston Jordan said while the ongoing COVID-19 pandemic and the torrential rains have influenced supply and demand, policies implemented by the Government have also contributed to the increase. “You will continue to hear things tight unless the government changes the backward policies that it has in place that seems to penalise the working class in this country,” Jordan told host of ‘In the Ring’ Sherod Duncan – an Opposition Member of Parliament.

In response to the crisis, President Irfaan Ali said that his Government will continue to give incentives to those investing in agriculture, given the nature of the global situation and the fact that Guyanese are also feeling the effects of the price increases. Along with supporting farmers and cushioning the net effect of the increased cost of freights, the President said that the range of tax benefits that his Government has instituted since returning to office, has helped offset the full brunt of the problem. He reminded of the removal of VAT on electricity and water, the 5% reduction—across the board—on water tariff, the zero-rated status on essential items and household items, the removal of VAT on data, the reduction of the excise tax rate on fuel (first in February and then in October) and the reduction of licence fee.

Additionally, he made mention of the many non-tax measures that directly impacted Guyanese, including the one-off $25,000 relief grant, the re-introduction of educational grants (benefited both public and private school students), a one-off 25,000 cash grant for pensioners and a range of other incentives.

Sun Dec 5 , 2021
Support Village Voice News With a Donation of Your Choice. …CEC to decide the way forward following systems review of by Alexander The highly anticipated People’s National Congress Reform (PNCR) 21st Biennial Delegates Congress slated for December 11 is at risk of being postponed over concerns that the requisite preparatory work will not be completed in time for the event. […]