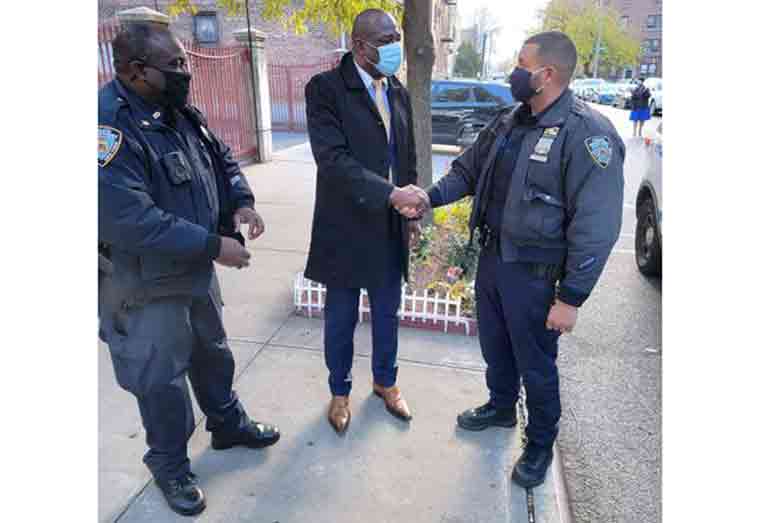 —activist defiant says bulletin a reaction to lawsuit against Jagdeo

There has been widespread condemnation of a wanted bulletin issued for US-based Guyanese Rickford Burke- an outspoken critic of the Irfaan Ali Government who now indict him with allegations of libel.

The wanted bulletin published Friday evening by the Guyana Police came mere hours after Burke through his attorneys served notice on Vice President Bharrat Jagdeo to sue him for GUY $100 million for libel.

In a statement Burke said in response to his impending lawsuit: “the PPP regime, through the Guyana Police Force, issued a purported Wanted Bulletin for me for suing Jagdeo and condemning their racism and apartheid governance.”

According to Burke the bulletin falsely asserts that he has committed sedition and incited racial hostilities in Guyana. “The allegations are false, ridiculous and laughable. I live in the United States. I have a First Amendment Right to free speech. I reiterate my condemnation of PPP racism and call for a resistance and revolution against PPP racism. The racist PPP cannot infringe on, or attempt to control, my constitutionally protected rights in the United States. The wanted Bulletin is evidence of the PPP regime’s blatant and corrupt abuse of the Police and Criminal Justice System to obtain political revenge against people who oppose them, condemn their racism and injustice against African Guyanese. I’m undaunted,” he declared.

One of the allegations- seditious libel has been repudiated as a very oppressive legislation and only recently the European Union called for its repeal.

The allegations listed against Burke are: The excitement of hostility or ill-will on the grounds of Race. [s. 2 of the Racial Hostility Act. Any person who willfully excites or attempts to excite racial hostility against a particular race by means of words spoken in a public place or transmitted by telegraphy].

Offence: Use of a computer system to coerce and intimidate under the Cyber Crime Act. [s.19 (3) makes it an offence to disseminate information via computer which is known to be false to damage the reputation of another person].

Offence: Seditious Libel [offence at common law. It is the overt speech or conduct to bring hatred and contempt against the Government].

Meanwhile, the APNU-AFC Opposition views the issuance of the wanted bulletin by the Guyana Police Force for the President of the Caribbean Guyana Institute for Democracy (CGID), Rickford Burke, as another attempt censor dissent. The opposition said since coming to power the PPP Burke has been on the forefront as a vanguard for democracy and justice, challenging their legitimacy and exposing their racist, totalitarian and evil deeds and this move must be seen for what it is; an attempt to silence him. “We condemn this vindictiveness by the Irfaan Ali regime led by Bharat Jagdeo. The Guyana Police Force should never be used as a weapon against our people and as a tool for suppressing our rights and freedoms which are entrenched in our Constitution. We are all too familiar with the PPP’s history of using state resources to reign terror on those who challenge their undemocratic and autocratic rule,” the APNU+AFC statement read. “The PPP’s weaponizing of the state apparatus must not be condoned. All Guyanese must stand against this blatant attempt to degrade and strip citizens of their constitutional freedoms. We cannot allow our country to continue its slow march towards dictatorship. We must stand firm. The APNU+AFC Opposition calls on all right thinking Guyanese, both home and abroad, to condemn this vindictive and spiteful act. The APNU+AFC promises to fight against this dictatorship and at the parliamentary level, will be addressing these egregious attempts to use the GPF to stifle freedoms of our citizens.”

Executive member of the Peoples National Congress Reform (PNCR) Aubrey Norton who is one of the nominees for leader of the party said “it is with a deep sense of concern that I condemn the Guyana Police Force for being used as a political tool by the installed Ali/ Jagdeo corrupt regime.” Norton said the GPF is complicit in the PPP dictatorial actions. “It is the desire of all Guyanese to live and work together. The only obstacle to us living and working together is the divisive, incompetent, dictatorial and corrupt Ali/Jagdeo/PPP regime,” Norton a former Member of Parliament said. He said Guyanese need a break from the PPP “wicked and malicious acts of discrimination and repression.”

“It is time to stop repressing the people and allow us to live and work together. You have become more oppressive than the colonial authorities and the slave masters,” Norton tells the PPP.

PPP will be defeated
He noted that both colonialism and slavery were defeated “and you will be too. The PPP seems committed to violating the rights of their opponents and all Guyanese to express their views freely in keeping with the law. Recently we saw the unlawful arrest of Mr. Winston Jordan which all fair minded Guyanese condemned. It appears now that the regime is not content with repressing people in Guyana, they are now spreading their tentacles of contempt, victimization and repression of people who oppose their illegal actions to other jurisdictions,” Norton statement read.

Norton said the issuing of a wanted bulletin for Rickford Burke without a basis in law must be condemned as an abuse of power and an act of repression. “The PPP must end its violation of the Guyana Constitution and return Guyana to a society where government and people are law abiding. Clearly the Guyana Police force is a tool of repression that is being used by the PPP to harass and silence its opponents. The regime must know that their actions have consequences. Is it not interesting and laughable that the GPF cannot find the murderer/s of Orin Boston in its own ranks but can issue a wanted bulletin to arrest opponents of the PPP against whom there is no evidence?”

Norton said the GPF time will be better spent finding the those who murdered the Henry boys and Haresh Singh. He said the GPF is clearly being used by the PPP to harass and imprison its opponents and that it is evident that the PPP has not learnt anything about democracy. “It is the same old dictatorial outfit and worst. The Guyana Police Force must operate within the confines of the law and end this fast March towards a police state in Guyana. These illegal acts must come to an end. So too must this ill of filing trumped up charges against innocent Guyanese. Trump may have installed you but you need to cease being trump in name and nature. The PPP Jagdeo/Ali corrupt, divisive and incompetent regime is pushing Guyana to the brink,” Norton stated.

He said at a time when all Guyanese should be working together to benefit from oil and gas and other resources, the regime’s actions are creating tensions and destroying the moral fabric of our society. “All Guyanese must condemn the PPP regime and the Guyana Police Force for returning Guyana to a state of lawlessness in just over one year. We need a lawful society. When those who are obligated to maintain law and order are themselves violating the law then it is time for the people to hold them accountable. The regime must take its hands off of Jordan, Burke and their opponents generally. Enough is Enough. We have to confront this emerging culture of trumped up charges against Afro Guyanese and all opponents of the PPP, regardless of their ethnicity. It is the desire of all Guyanese to live and work together, unfortunately the PPP seems hell bent on destroying Guyana,” Norton’s statement concluded.

Mon Dec 6 , 2021
Support Village Voice News With a Donation of Your Choice. —Shuman unimpressed with govt, calls for rescinding of Marudi Mountain mining agreements Deputy Speaker of the National Assembly and Leader of the Liberty and Justice Party (LJP), Lenox Shuman has called on the Government to rescind the Marudi Mountain Mining Agreements over lack of consultation with the Indigenous Peoples. “The […]