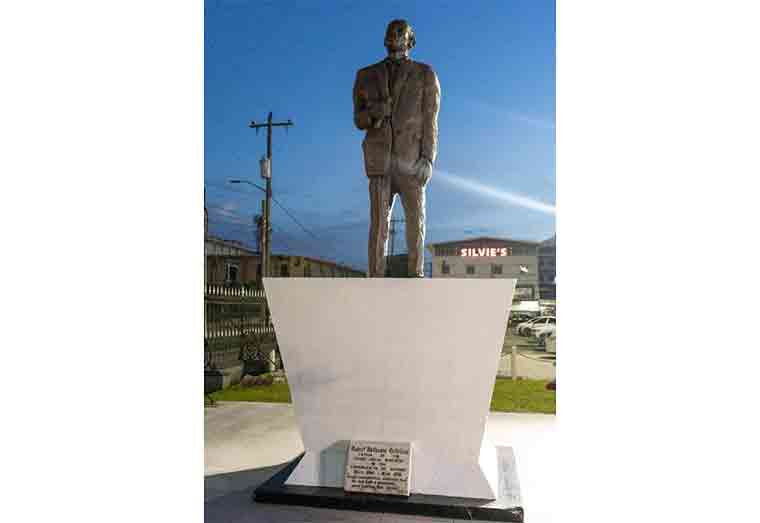 Lincoln Lewis, the General Secretary of the Guyana Trade Union Congress (GTUC) – was reportedly barred from delivering an address on behalf of the Union at a ceremony held at the Public Buildings to mark the enhancement of the Critchlow Statue.

Lewis was expected to speak on behalf of the President of GTUC, Coretta McDonald, but was reportedly informed by the Parliament Office that only the President would be permitted to deliver an address.

In a press statement, Lewis said though the invitation was directed to the President of the GTUC, it is the union that determines who will attend, and on that basis, he was identified by the President to address the forum.

Though not being able to deliver his address on the grounds of the Public Buildings, Lewis made his prepared statement public.

In that statement, the GTUC General Secretary expressed satisfaction with the physical enhancement of the statue of Hubert Nathaniel Critchlow.

“This man’s contributions to the development of Guyana and the British Commonwealth are outstanding and rare. These cannot be ignored, denied or taken away.  It was he who in 1905 began organising workers in their demand for better wages/salary and improved working conditions from the employers; and for social, economic and political justice from the Crown/Government.

Skibby, as he was fondly called, secured the unique place of recognition for Guyanese with the formation of the first Trade Union in the British Empire -the Guyana Labour Union- and cemented his place as the Father of Trade Unionism in what is today known as the British Commonwealth,” Lewis stated.

It was noted that prior to the establishment of the International Labour Organisation (ILO) in 1919, Critchlow had outlined acceptable principles to safeguard workers’ rights.

“He was the first Guyanese Leader, along with other Caribbean Labour Leaders, who in June 1926, met in the hallowed halls of Parliament and charted a course for the empowerment of the region’s peoples. Amongst these were the fight for internal self-government, one-man-one-vote, public health and free education; paid sick, maternity and vacation leave, etc,” Lewis pointed out.

It was noted too that Critchlow was a political pioneer and amongst those in the formation of the People’s Progressive Party, and had ran for a seat in the Legislature.

“It is therefore most fitting that our parliamentarians and all Guyana remember the placement of his statue is not by chance but most deserving. To the current political corps: – Critchlow understood what self-determination, freedom of association, respect for another’s right to identity/elect their leaders who will intercede on their behalf, meant to individual and national peace and development. This is the basis of our political system and expressly voiced in Article 13 of the Constitution of Guyana. This aspiration is threatened daily due to the absence of political will and the contempt for laws when self-serving agenda is not met,” Lewis said.

Public servants who were dismissed, resigned during 2021 will not  get 7% ‘retroactive’ payout

Thu Dec 2 , 2021
Support Village Voice News With a Donation of Your Choice. Hundreds of public servants, who were placed on the breadline during the course of 2021, will not benefit from the 7% ‘retroactive’ payment intended for workers this year, according to a circular issued by the Ministry of Finance. “The Government has approved a 7 percent across-the-board salary increase for all […]