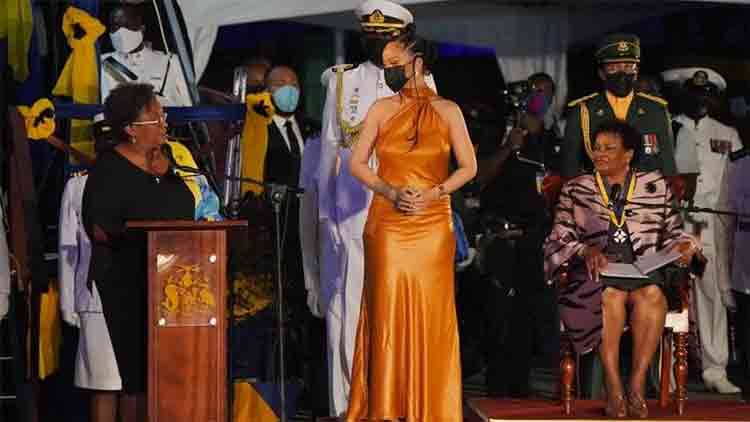 Guyana has congratulated Barbados on its attainment of Republican status and President Irfaan Ali told the first President of that country Sandra Mason and Prime Minister Mia Mottley that their island has Guyana’s unwavering support.
Today, the Republic of Barbados celebrated its 55th Anniversary and its inaugural Republic Day, which saw Mason becoming the island’s first President.
President Ali, in letters to both Mottley and Mason, emphasised Guyana’s commitment and support to Barbados. “As Barbados embarks upon its new status as a Republic, I assure you, President Mason and Prime Minister Mottley and the Government and people of Barbados of Guyana’s continued and unwavering support.”

The President added that Guyana salutes “the Barbadian people on this momentous transition as you seek to further consolidate political independence and nationhood. It is a tribute to the conscience and courage of your forebears who yearned for freedom in all its plenitude and stood fast against the odds”.
The Head of State also commended Prime Minister Mottley for “steering the successful advancement of Barbados’s constitution and the completion of its national independence”.

As a close partner with Barbados in the CARICOM Community, the President noted that Guyana is fully aware of the strong sense of patriotism and commitment to regionalism by the Government and people of Barbados, and rejects completely any suggestion that Barbados has adopted Republic status for any reason other than the rightful desire to own its constitution and arrangements of Government.
“Guyana and Barbados are joined by ties of blood, history, and friendship. Our two countries now traverse the path of independence and integration as sister Republics. We look forward to working with you to further develop the warm and friendly ties which so happily exist between us and to strengthen the fabric of our Caribbean community.”
President Ali added that while the decision by the Government and people of Barbados unties the formal constitutional connection to Her Majesty Queen Elizabeth II, it does not, in any way, diminish the high regard that is retained for The Queen, whose role as the Head of the Commonwealth of Nations is “deeply appreciated”.

Wed Dec 1 , 2021
Support Village Voice News With a Donation of Your Choice. Dr. Karen Francis-Cummings (APNU/AFC Coalition Shadow Minister for Health) On this World AIDS Day 2021, the World Health Organization (WHO) and the Joint United Nations Programme on HIV/AIDS (UNAIDS) have called for countries around the world to end inequalities and inequities, end the AIDS pandemic, and ensure that people who […]