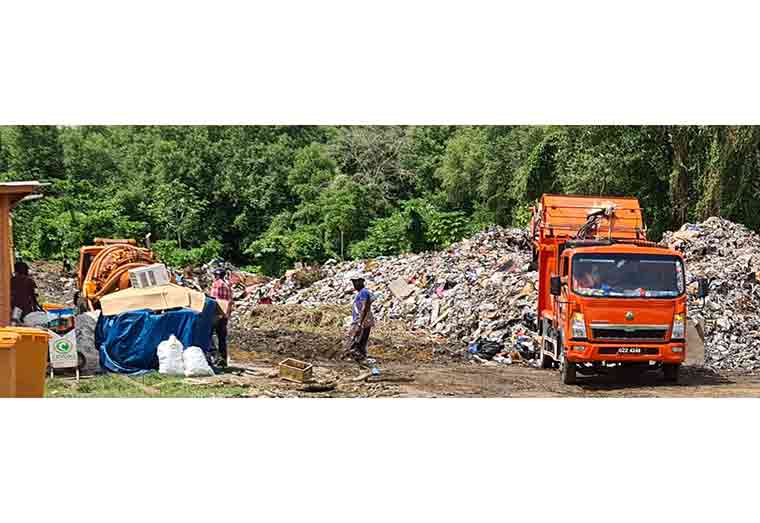 The landfill site in New Amsterdam Region 6 (East/Berbice /Corentyne) is rapidly becoming a major eye sore of increasing piles of waste much to the concern of the Mayor and Town Council.

Councilor in the Municipality Kirk Fraser complained.to Village Voice News that the Council had been advised that the landfill located at the Esplanade should have been covered and capped and the area made safe at least a year ago but that the opposite is happening.

“We have seen that this landfill has reached its full capacity. Dumping should not be taking place here now and the area should have been covered over so you don’t see the garbage ,” he said.

“What is happening here is that the waste is dumped on the surface and remains on the surface with the resultant ugly sight and smell .Councilors are not landfill experts but we are sure that this should not be happening. And you don’t have to be an expert to understand the related threats to human health posed by rats and other vermin.”

He added that Councilors were of the layman’s opinion that cells should have been created for waste and that each cell is filled with waste until it reaches a certain agreed level then capped.

He said: “Nothing of the sort is happening here and with the current rainy weather the area is more dirty than ever.”

During a recent visit to the landfill site Village Voice News observed the wall like nature of the waste towering about fifteen feet off the ground in some areas.

Visible too was the poor state of the access road for vehicles dumping garbage.

What Village Voice News observed was that the poor state of the access road at the time of our visit deterred the dumpsters from venturing too far into the site and resulted in them dumping garbage not too far away from the main road instead.

At the time of the observation the waste was being dumped closer and closer to the main road leading to the New Amsterdam Hospital.

Fraser said that he was certain that the Contractor for the landfill who had been employed by Central Government should have been responsible for maintenance of the access road, but as was observed, this was not or had not been done, at least not up to the time of the visit a few days ago.

He recalled that under the previous Administration, a $25M contract was awarded to Cevon’s Waste Management for 18 months to manage the site.

However, when the new administration took office the contract ended and a new one was awarded to Vals Construction valued at $48.3M for an 18 month period.

The Councilor complained that the Town Council is stymied in its assessment of this project because although the land belongs to the Municipality, which is a major stakeholder, Central Government had made no information available.to the Council

“We asked to see a contract to see exactly what the contractor has to do, to date the Ministry has not provided us with one, neither the contractor.”

He also disclosed that the Council requested that supervision by way of a Clerk of Works be placed at the landfill, this has not been granted. “Of course we are now of the view that the Contractor is either incapable of managing the project or is negligent in doing so.”

He said: “This whole situation is beginning to get out of hand and the Council is hoping for an intervention from Central Government ; for some sort of quality assurance before a major health hazard occurs due to the eye sore nauseous and chaotic state of this landfill site.”

Sun Nov 28 , 2021
Support Village Voice News With a Donation of Your Choice. Leader of the Opposition, Joseph Harmon, on Friday, condemned President Irfaan Ali’s attack on the country’s trade unions, who in recent days rejected Government’s imposition of a 7% across the board increase for public servants. The Guyana Public Service Union (GPSU), the Guyana Teachers Union (GTU), and the Guyana Trades […]