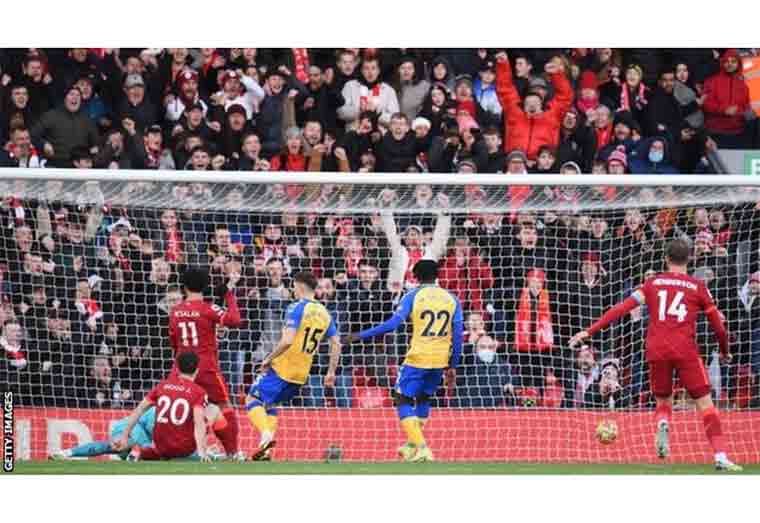 ( BBC Sport) Diogo Jota scored twice as Liverpool thrashed Southampton to move up to second in the Premier League, one point behind leaders Chelsea.

Southampton arrived at Anfield clearly determined to attack the hosts but their bold intent was punished after less than two minutes when Andrew Robertson was allowed to get away down the flank and cross for Jota to poke in.

ADVERTISEMENT
Sensing the opportunity to secure a big win against wide-open opponents, Liverpool kept up the attack, Sadio Mane heading wide before having a goal ruled out for a marginal offside.

But a second goal duly arrived just after the half-hour mark when the unmarked Jota tapped in from Mohamed Salah’s square ball after good link-up play between the Egypt international and Jordan Henderson.

Those two strikes took Liverpool to 700 goals scored since Jurgen Klopp arrived at Anfield – they have also become the first top-flight team in English football to score at least twice in 17 straight matches in all competitions since Sunderland in 1927.

The Reds were not done there, however, and a third goal arrived just a few minutes later when the visitors failed to clear their lines properly and Thiago Alcantara punished them with a deflected strike for his second goal in as many games.

The half-time interval provided only a brief respite and Liverpool made it 4-0 soon after the restart as Virgil van Dijk fired in from a corner.

Jota almost completed his hat-trick midway through the second half but stabbed just wide as Southampton kept the damage to four goals when in truth it could have been much worse.

With games every three or four days, December is looking like it could be a crucial month in the title race but Liverpool head into the festive period in imperious form.

In the space of seven days they have sent Arsenal, Porto and now Southampton away from Anfield empty handed – scoring 10 goals and conceding none.

It is the sort of marker they needed to lay down after a couple of disappointing results at the start of this month – drawing at home to Brighton and losing at West Ham – but the last few days have shown Liverpool at their attacking best.

They were helped in this game by a Saints side who looked disjointed and far too open from the outset, but the hosts’ attacking play would have found a way through a stiffer defence than this.

Liverpool’s pace going forward was relentless, with Jota, Mane and Salah hanging off the shoulders of the Southampton defenders, ready to pounce on any opportunity.

This was a rare game in which Salah was not on the scoresheet but he still more than played his part and his assist for the second meant he has now been directly involved in 150 Premier League goals in his 171 league games for the Reds.

The pace certainly dropped off after Van Dijk scored Liverpool’s fourth but with nine games coming up in December, Liverpool perhaps wisely conserved their energy.

Sun Nov 28 , 2021
Support Village Voice News With a Donation of Your Choice. (BBC NEWS) A 24-year-old Kurdish woman from northern Iraq has become the first victim of this week’s mass drowning in the Channel to be identified. Maryam Nuri Mohamed Amin was one of 27 people who died while attempting to cross to Britain on Wednesday. Her fiancé, who lives in the […]