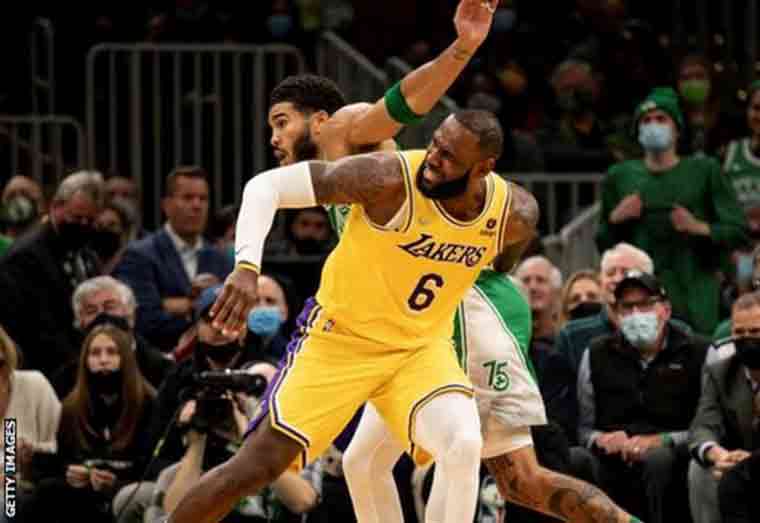 (BBC SPORT) LeBron James said the Los Angeles Lakers need more “urgency” after his comeback ended in a 130-108 defeat by the Boston Celtics.

The NBA great, 36, returned after eight games out with an abdominal problem.

He finished with 23 points, six rebounds and two assists – but the Lakers still fell to a ninth defeat in 17 games this season.

Jayson Tatum scored 37 points and had 11 rebounds as the Celtics, 61-60 down after the second quarter, came back.

“I’m more looking forward to seeing how I feel tomorrow when I wake up. That is the tell-tale sign if I’m going in the right direction with my injury,” said James.

The 17-time NBA All-Star admitted his frustration after the Lakers were dominated in the third and fourth quarters.

The Detroit Pistons could not take advantage of a Stephen Curry-less Golden State Warriors, who beat the hosts 105-102.

Jordan Poole led the way for Golden State with 32 points, with Andrew Wiggins scoring 27 and Nemanja Bjelica adding 14 off the bench.

The Phoenix Suns extended their winning streak to 11 games, thanks to 19 points from both Mikal Bridges and Devin Booker, as they beat the Dallas Mavericks 112-104.

James Harden contributed 36 points as the Brooklyn Nets squeezed out a 115-113 victory over the Orlando Magic, despite being without Kevin Durant, sidelined with a sprained right shoulder.

Giannis Antetokounmpo had 21 points, 19 rebounds and seven assists as the Milwaukee Bucks overcame a spirited comeback from Oklahoma City, for a 96-89 victory.

Sun Nov 21 , 2021
Support Village Voice News With a Donation of Your Choice. …after hitting three against Leicester (BBC SORT) Premier League leaders Chelsea ruthlessly tightened their grip on top spot by punishing the failings of lacklustre Leicester at King Power Stadium. Antonio Rudiger continued his habit of scoring against the Foxes with a glancing, looping header from a corner whipped in by […]