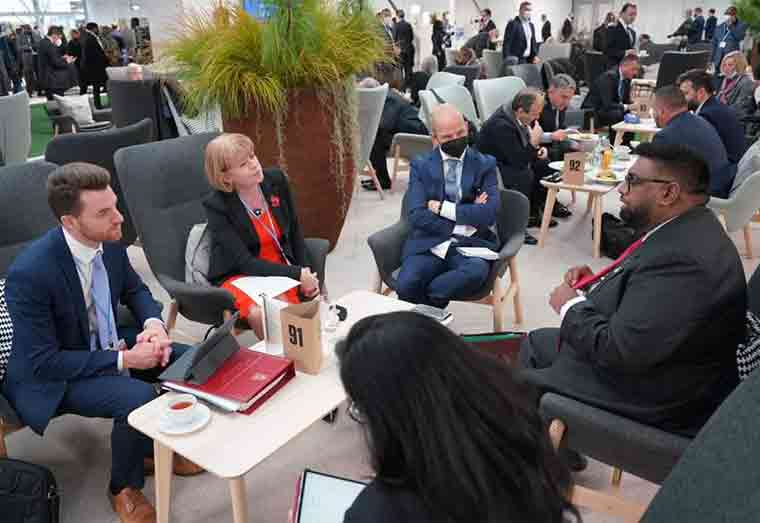 …UK makes query about Guyana’s unfinished plan to fight climate change
The United Kingdom has questioned Guyana about its National Determined Contributions plan- a document which is yet to be completed, but has been touted in speeches by high officials here.
During his address at the United Nations Climate Change Conference of the Parties (COP26) in Scotland on Tuesday President gave oral commitment to world leader that Guyana was already playing its part in addressing climate change and will continue to do so. He said: “We will maintain our forests, which is almost the size of England and Scot-land combined, storing 20 gigatonnes of carbon as a global asset. We will work with local communities on conserving, protecting and sustainably managing our forests, biodiversity and freshwater supplies. We will decouple economic growth and emissions through a progressively cleaner energy mix with the aim of reducing our carbon emissions by 70 per cent by 2030.”

However, Guyana is yet to finalise its NDC and had one national consultation on the matter, which the opposition had labelled as a sham. According to a Department of Information release Ali held bilateral discussions with the United Kingdom’s Minister for Europe and the Americas (Foreign, Commonwealth & Development Office), Wendy Morton, at the Scottish Event Campus, where he outlined Guyana’s climate change plans and concerns. It was at the said meeting Morton questioned him about Guyana’s plan. It is not clear what was Ali’s response as the DPI release did not state.
The information agency however said that the Guyanese Head of State informed Morton, who is also the Parliamentary Under-Secretary of State, of Guyana’s expanded Low Carbon Development Strategy (LCDS) that was launched last week for national consultation.

President Ali, DPI said emphasised the value of the country’s standing forests and his government’s quest to enhance the livelihoods of its citizens with new opportunities. He also highlighted the current woes faced by Small Island Developing States (SIDS); he lobbied for a multidimensional vulnerability index (MVI) fund and for developing countries to not only fulfil their current pledges but also state how they intend to do so.
The President underscored the climate emergency and the need to function as a collective unit.  With that in mind, he also spoke of the desire by many to restructure existing loans to help countries not only bounce back on their feet but to satisfy commitments to climate change.
President Ali and the UK official also discussed the impact of the Covid-19 pandemic and the need to reprioritise finances to deal with issues such as education regression. In turn, Morton enquired about Guyana’s plan regarding its Nationally Determined Contributions (NDC) and said she was interested in improving trade relations between the two countries. The Guyanese President reminded the Parliamentary Under-Secretary of State that Guyana has already demonstrated its commitment to fighting climate change.  He listed several projects as examples, including the country’s pursuit of renewable energy by way of the Amaila Falls Hydro project.

Back in October A Partnership for National Unity + Alliance For Change (APNU+AFC) Member of Parliament, Amanza Walton-Desir poured cold water on Guyana’s proposed NDC and warned that the Government plans to implement a “heavy-industry, heavy-pollution” led development strategy, which would only place Guyana on a downward spiral.
Influenced by the haste to finalise the NDC ahead of the 2021 United Nations Climate Change Conference (COP26), the Government had held a consultative session at the Arthur Chung Conference Centre (ACCC). However, MP Walton-Desir stated that it was nothing but a “sham.”
MP Walton-Desir, said that Vice President, Bharrat Jagdeo has already set Guyana on a new, but retrograde heavy-industry, heavy-pollution path under the guise consultation for the benefit of a select few. She indicated that VP Jagdeo now drives forward with gas-lighting, so that the national and international community would underwrite and subsidise his self-serving plans.
“We are being told that we have ceded our decision-making responsibilities into the hands of one person, the Vice President. The vision touted by the Vice President — a new heavy-industry and heavy-pollution led development strategy, and the nation’s wealth privatised in the control of a few select businesses – will set Guyana on a downward spiral that cannot be easily reversed or corrected.
It will accelerate the degradation of all natural resources…adding degraded marine resources to the degraded forest and mineral resources, and all for narrow private gain. It will impoverish the present and future generations who will have to live with the dire consequences,” MP Desir warned.
She challenged citizens to firmly reject the action of the Vice President by petitioning against it. “Just say ‘No’, not in my name, not in the name of my children and their children’s children’ NO,” she urged.

APNU: Together we can create a better Guyana

Thu Nov 4 , 2021
Support Village Voice News With a Donation of Your Choice. The APNU+AFC coalition takes this opportunity to extend greetings to the Hindu Community in Guyana and indeed, to all Guyanese, on the occasion of Deepavali or Diwali. As we celebrate this auspicious occasion, we are reminded that light always triumphs over darkness and good over evil. The APNU+AFC remains committed […]