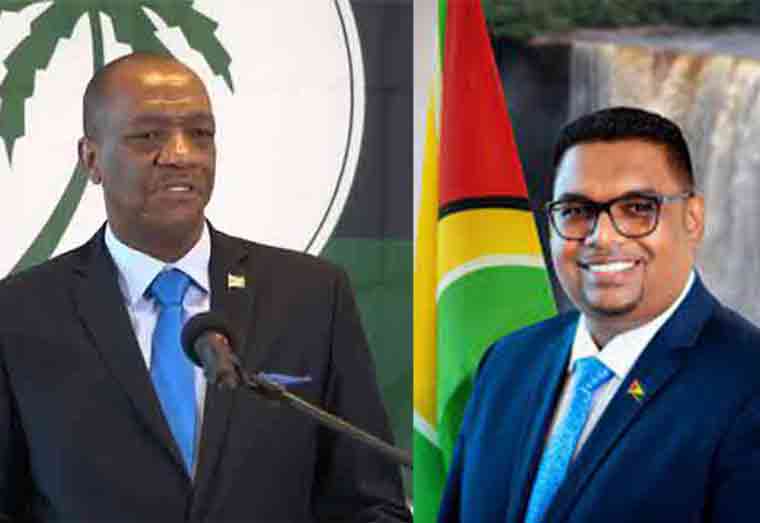 Leader of the Opposition Joseph Harmon said President Irfaan Ali must demonstrate his commitment to meet by setting the date, time and agenda for their engagement and that it should not only discuss the appointments of constitutional office holders but also issues plaguing the country, such as the discriminatory distribution of resources.

“When that letter arrives then I know he is serious; then I know there is a serious attempt at us discussing the issues that affect the people of Guyana,” Harmon said.

Harmon made the statement during a press conference on Tuesday (November 2) days after the President back pedaled on his earlier position that he will not meet with the Opposition Leader unless he acknowledges the legitimacy of the Government. On October 29, President Ali said he will fulfill his constitutional mandate, admitting that the Constitution sets no pre-condition for him to meet with the Opposition Leader on the substantive appointments of the Chancellor of the Judiciary and the Chief Justice.

Since 2005, Guyana has been without a substantive Chancellor and Chief Justice.  Article 127(1) of the Constitution provides that “the Chancellor and the Chief Justice shall each be appointed by the President, acting after obtaining the agreement of the Leader of the Opposition.”

Harmon, on Tuesday, said he has long expressed a willingness to meet with the President but said the meeting should not be limited to constitutional appointments.

“We can have a very strong agenda that addresses the reasons why almost all of the resources that are coming from oil and gas upstream, that the bulk of it seems to be going to foreign companies,” Harmon said, while noting that the issue was also raised by the Georgetown Chamber of Commerce and Industry (GCCI) during a meeting with him on Tuesday.
Harmon is also hoping to address the ‘discriminatory’ distribution of resources by the State in communities dominated by Opposition supporters. He said the distribution of the relief grants is a primary example.

“We have to speak about, why is it that communities are now divided into red communities and green communities when resources of the State have to be administered; when grants have to be given. Why is it, that some communities are bypassed, he has to speak about that, and how we are dealing with the resources of this country in an equitable manner, that is what we need to speak about. The other things about the confirmation, they are also important, but I think it is time we have a meaningful conversation about how this country is being developed and why is it that huge sections of the population are being left aside,” the Opposition Leader told reporters.

He said that the A Partnership for National Unity + Alliance For Change (APNU+AFC) Coalition – the main opposition party in the National Assembly – is being bypassed.