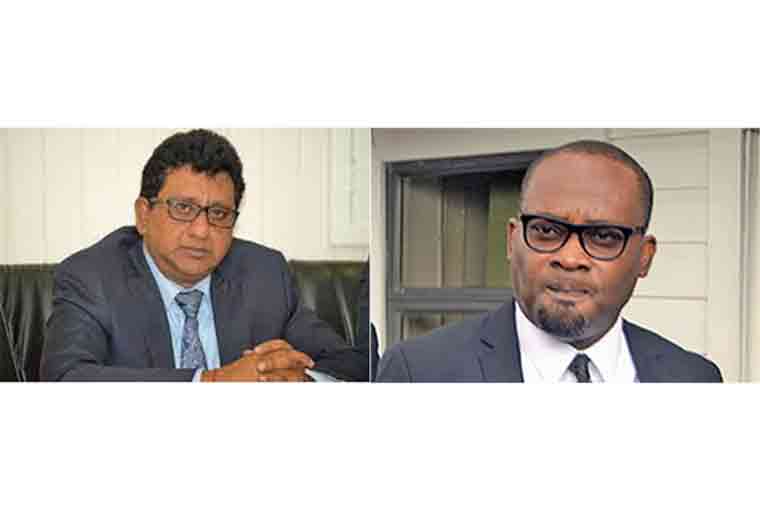 Justice Franklyn Holder on Monday ruled that the consideration and approval of the budget proposals for constitutional agencies by the National Assembly in September 2020 were unlawful – dealing another defeat for the Attorney General and Minister of Legal Affairs, Anil Nandlall, and by extension the Government.

In the case, which was brought by A Partnership for National Unity + Alliance For Change (APNU+AFC) Member of Parliament, David Patterson against the Attorney General and the Minister of Finance, Justice Holder explained that the Respondents could not have relied on the ‘doctrine of necessity’ as a defense to their violation of Section 80 (1) and (2) of the Fiscal Management and Accountability Act as argued by the Attorney General.

Section 80 B (1) of the Fiscal Management and Accountability (Amendment) Act of 2015, mandates that the Budget of the Audit Office of Guyana be submitted to the Parliament by the Chairperson of the Public Accounts Committee (PAC), however, no such submission was made, since it was not until September 15, 2020 that the PAC was constituted, and Patterson appointed Chairman.

Justice Holder said had there been an emergency, the Finance Minister, by virtue of Article 219 (3), was empowered to withdraw monies from the consolidated fund, if he had considered it necessary for meeting expenditure until three months after the September 1, 2020.

“There was ample provision by virtue of Article 219 (3) to address any perceived dilemma relative to the financing the new government and the constitution agencies,” Justice Holder said.

As such, he declared that the consideration and approval of the budget proposals of Constitutional Agencies by the National Assembly on September 1, 2020 was in breach of Sections 80 B (1) and (2) of the Fiscal Management and Accountability Act.

The High Court Judge also declared that failure, on the part of Government, to circulate the Budget proposal of the Constitutional Agencies to APNU+AFC Members of Parliament prior to September 1, 2020 was also in breach of Section 80B (2) of the Fiscal Management and Accountability Act.

Senior Counsel Roysdale Forde, who represented Patterson in the matter, lauded the decision handed down by Justice Holder.

“The court rejected the arguments of the Attorney General which sought to justify the illegal process and conduct of the Minister of Finance and the National Assembly,” he told Village Voice News.

Last month, High Court Judge, Justice Nareshwar Harnanan had ruled that the budgetary process utilized by the People’s Progressive Party/Civic (PPP/C) Administration violated the Constitution. It was explained that constitutional agencies ought not to have been lumped with budgetary agencies as they constitute a direct charge upon the Consolidated Fund.

On Monday, Forde accused the Attorney General of misguiding the government.

“I had indicated to the Attorney General that he was misleading the installed Government, the Speaker and the National Assembly by advising them to act in a reckless and irresponsible manner. I will continue to defend the Constitution and the Rule of law by instituting proceedings in the Courts,” he said.

Tue Nov 2 , 2021
Support Village Voice News With a Donation of Your Choice. Dear Editor There is a plathora of distasteful and unethical video clips involving members of the Guyana Police Force in uniform and civilian clothing circulating with alarming frequency in the social media. Many of these clips are recorded by ranks and posted on the social media. A recent one I […]