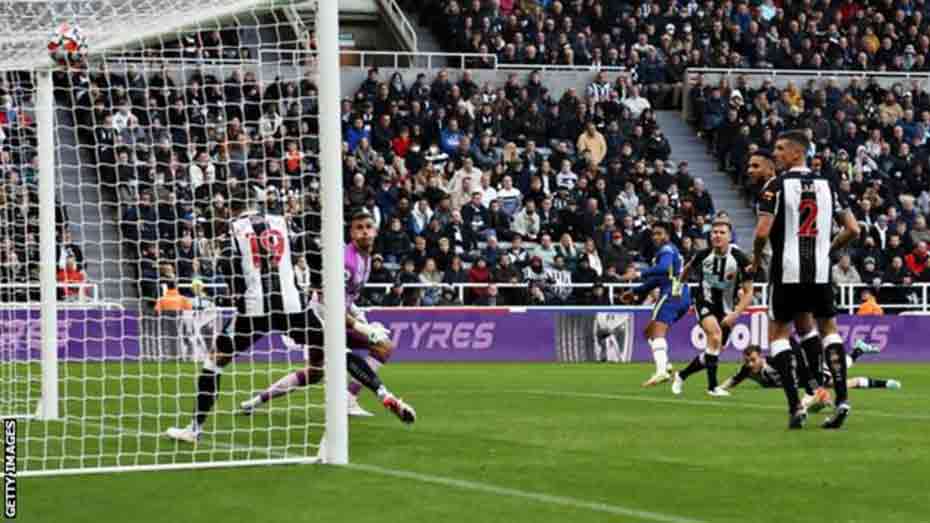 James blasted the ball into the roof of the net after Callum Hudson-Odoi’s cross was headed into his path to put the visitors ahead after 65 minutes.

Darlow then fouled Kai Havertz to give Chelsea a penalty, which Jorginho converted for a third goal.

Newcastle, playing at home for the first time since Steve Bruce was sacked, struggled to create chances with England striker Callum Wilson heading a rare opportunity over the crossbar.

They remain without a league victory this season and are 19th in the table.

Meanwhile, Thomas Tuchel’s side extend their lead at the top to three points after second-placed Liverpool threw away a 2-0 lead and drew 2-2 at home to Brighton and champions Manchester City suffered a shock 2-0 home loss to Crystal Palace.

For Newcastle fans this was a painful reminder of the task ahead of the side and a dampening of the optimism that has surrounded the club since the £305m takeover by the Saudi Arabian-backed Public Investment Fund (PIF).

A crowd of 52,209 was present to see their second home game since that takeover and their first with lifelong Newcastle fan Graeme Jones in temporary charge following the sacking of Bruce earlier this month.

But the hosts offered little attacking threat, only having one weak effort on target, no corners and just 21% of possession as Chelsea kept their seventh league clean sheet of the season.

“We don’t want to play this way, but it is where we are at the moment,” said a realistic Jones afterwards.

It became a question of whether Chelsea, without the injured forward pair of Romelu Lukaku and Timo Werner as well as Mason Mount who was unwell, could find their way through a resolute defence that in the first half denied the European champions a shot on target.

But Chelsea were instantly better at the start of the second half with Hakim Ziyech, who shot over when well placed in the first half, having a deflected shot bounce off the post. The chances kept coming for Tuchel’s side with Havertz, Antonio Rudiger and Ziyech again all wasting opportunities as Newcastle battled to hold on for what would have only been their fifth point of the season.

But that brave resistance was ended in the 65th minute with the first of James’ well-taken finishes and from them on it was how many Chelsea would score. In the end, Chelsea’s class proved the difference with three goals in a 16-minute spell to get the three points.

Sun Oct 31 , 2021
Support Village Voice News With a Donation of Your Choice. The month of October, dedicated Breast Cancer Awareness Month, was observed under the theme: “RISE: Rally In Supporting, Serving and Screening Everyone”. Many institutions, organisations and individuals played their role to create awareness, show support for the victims and join their efforts to continue to sound their voices for a […]