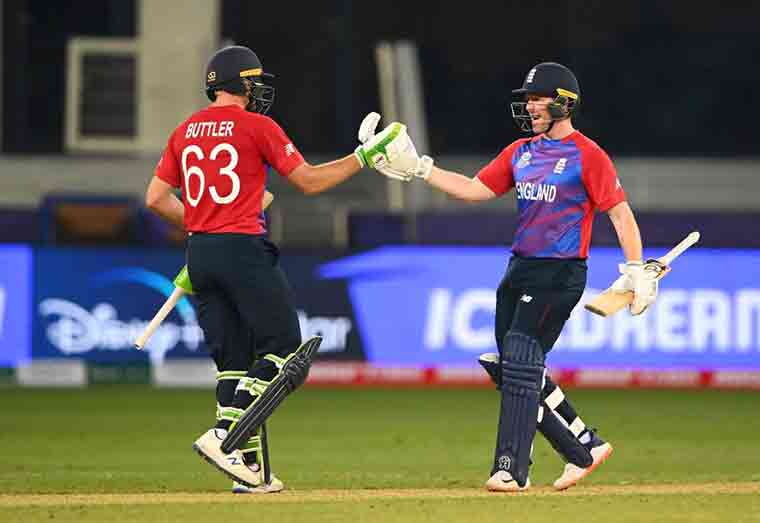 (CRICINFO) There was no thriller in the repeat of the 2016 T20 World Cup final, as West Indies played low-percentage cricket on a difficult pitch to be bowled out for 55, a target England had to work reasonably hard to overhaul, losing four wickets and taking 8.2 overs. Between them, England spinners Moeen Ali and Adil Rashid bowled 6.2 overs for 19 runs and took six wickets.

That it wasn’t extremely easy for England while chasing will make West Indies question their approach – they lost nine of their 10 wickets looking to hit a four or a six, 59 of the 86 balls they faced were dots, and they made no attempt to rebuild after losing early wickets. On flat pitches, there is nothing wrong with this approach, but will these pitches make West Indies play differently?

Whether West Indies aimed too high and fell too short, or they didn’t trust themselves to bat at a run a ball for five or six overs without taking risks is something we will get to know if they are caught batting first on a difficult pitch again in this tournament.

Moeen with the new ball

In a highly tactical first few plays, England opened the bowling with Moeen. They had two things working for them: West Indies had four left-hand batters in their top six, and Lendl Simmons had gotten out to offspin in the warm-up game. Evin Lewis ruined a tidy first over by hitting the last ball for a six, but he fell to an exceptional catch by Moeen running back in the next over after he had miscued a well-disguised Chris Woakes slower ball.

In the next over, Simmons repeated his dismissal to Mohammad Nabi as he found deep midwicket to perfection, off Moeen. Chris Gayle and Shimron Hetmyer tried to counterattack, which can’t be faulted much because maximising powerplays has been key to setting good scores on these pitches. Hetmyer, though, found mid-on as he looked to hit a third boundary in Moeen’s third over.

Bowling for the first time in international cricket since May 2018, Tymal Mills then got rid of Gayle with a sharp short ball, making it 31 for at the end of the powerplay.

This is usually a time when many T20 sides start to look to rebuild but West Indies kept coming at England. This could perhaps be a response to their not being able to score singles or because they felt singles were not going to get them to a fighting score. Dwayne Bravo, promoted to break the left-hand batters in the middle without sacrificing Kieron Pollard and Andre Russell at the death, failed to keep a cut down a ball after he had hit an upper-cut for four. Nicholas Pooran fell to a big drive with an open face. The ball did just enough to take the edge. West Indies were 42 for 6 in the ninth.

Rashid runs through the rest

Rashid was introduced in the 11th over with Pollard and Russell in the middle. Finally, now, it seemed West Indies were eschewing big shots and taking whatever they could get by batting 20 overs. Russell even provided a forward-defensive to Rashid, but he spun the wrong’un through the gap to make it 44 for 7. In Rashid’s next over, Pollard was beaten in the flight as he looked for a six, and hit the wrong’un straight to long-on. Obed McCoy tried to hit a six first ball and holed out. Ravi Rampaul resisted for a while but was bowled trying to slog-sweep in Rashid’s next. Rashid’s figures at the end read: 2.2-0-2-4.

It wasn’t all that easy to bat even though England didn’t have a big target to chase. They had the net run-rate on their mind, which is why they kept sending in attacking batters, but nobody could bat at much higher than a run a ball. When they tried to force the pace, they got out, losing four wickets before they got to the target in 8.2 overs. Jos Buttler played 22 balls for his 24 runs, but it was enough to take the team home.

Charged with raping woman after giving her alcohol

Sun Oct 24 , 2021
Support Village Voice News With a Donation of Your Choice. (Trinidad Express) A 40-year-old Bon Accord man charged with rape and two offences of grievous sexual assault appeared before Magistrate Jo-Anne Connor at the Scarborough Magistrates’ Court yesterday. He was granted bail with a surety of $100,000 or a cash alternative of $10,000. He is scheduled to reappear on November […]