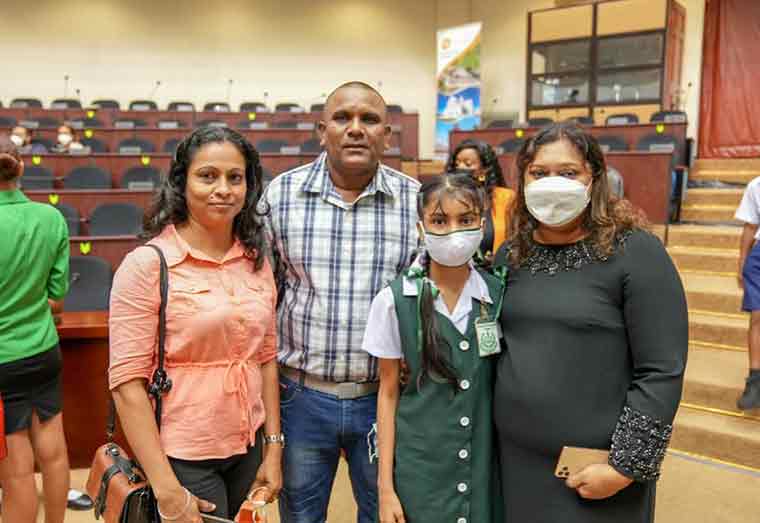 …family members proud of their achievement

Should things go as planned, zoologists, biologists, chefs and pilots are just some of the professions that Guyana can look forward to from its top-performing pupils coming out of the 2021 National Grade Six Assessment (NGSA) exams.

The Village Voice News spoke with as many of these top performers as possible on Friday after the children learned of their results and excitement and good prospects filled the air.

Top student, Nirvana Wimal of Success Elementary who secured 524 out of 527 marks said that she endured many sleepless nights of studying and it has now paid off. After school, she would attend lessons, complete her homework and study, going to bed some nights around midnight.

Explaining why she didn’t expect to top the country, she said: “I know there are other children who do better than me, so I wasn’t really expecting it.” She owed her success to her teachers for maintaining their strictness and her parents for helping her study.

She said: “I want to be a teacher when I grow up because I can share the knowledge that my teacher taught me to everyone else.”

Meanwhile, Deja Datt of New Guyana School who tied at second place nationally with Parris Timmerman at 523 marks, said that she began studying for the exams in 2020. “It has always been my dream to just be in the top ten, whether it be for the region or the entire nation. So, to experience this today and to realise how far I’ve come, it has really been a big stepping stone,” she said.

Not shy to speak to the media was Parris Timmerman of Chateau Margot Primary who placed second in the country, along with Deja Datt, with 523 marks.

“I feel very excited, I’m very happy about it and I didn’t expect it,” Parris said. “My thoughts are ‘I did it, so I guess I have to work even harder to achieve more’.”

In preparing for the exams, she said that she had to study regularly, especially late at night, and would keep herself motivated by remembering the words of her parents: “It’s a one-time opportunity, I have to push my best so I’ll have no regrets.”

Parris wants to become an accountant. She is leaning towards this career because she has loved maths from a young age although she noted that it is becoming more difficult. “Although maths is not my favourite subject anymore, I still like the thought of becoming an accountant,” she said.

Her advice to other upcoming pupils is: “Study very hard and put away the gadgets for now because it’s one opportunity. Put your best foot into it and have no regrets.”

Parris’ father, Colin Timmerman said that he is really proud of his daughter and excited for her future. “The work was put in. It was challenging and there were a lot of late nights but now we can see the results and be happy,” he said.

Meanwhile, seated near his mother was Sabastian Khan from Region Seven. He is the top performer for his Region gaining 495 marks at Potaro Primary. With his stellar performance, he is now slated to attend St. Joseph’s High.

Telling of the method he used to pass the exams, he said: “For the exam, for me, I didn’t do deep studying. Piece by piece I tried to grasp everything that I learned. For me, the most difficult part was waking up to study. I’m not a morning person, in the night I preferred to study.”

Sabastian told the Village Voice News that he wants to become a Zoologist or an Eco-biologist. This was influenced by his love for watching Animal Planet.

By his side was his mother, Althea Cruickshank. She said that she was elated to learn that her son was among the top performers but also expected him to do well based on his past performances.

“Throughout his school life he has always been first or second place,” she said. Cruickshank is also the Grade Six teacher for Sabastian’s class. She said that while she tried to work with him one-on-one at home, she found that he grasped the information better in the classroom setting.

She supports his dream to become a Zoologist and has seen his passion for this in his television interests and drawings.

Coming all the way from Region Nine were Leandro Marcello of Aishalton Primary and Kellon Jordon of Karaudarnau Primary who are among the top performers in the Region. While Leandro secured 507 marks, Kellon secured 502.

“I faced challenges with the internet. I have no learning device and I had to study late at night,” Marcello said. Meanwhile, Kellon said: “I had other work to do and, at the same time, I had school work to revise. So I had to do my home chores and then do the school work, so that held me back.”

Even with the challenges, the boys said that they studied hard and told themselves that they could achieve good grades. Leandro said that his request of the Ministry of Education is a laptop to improve his current position at home while Kellon requested faster internet connection.

At the Center with his mom, Annalicia McArthur and dad Paul McArthur was Joshua McArthur who tied with five others for the fifth position nationally with 521 marks.

“I felt ecstatic and very proud of myself and I celebrated immediately,” he said recounting his actions and emotions when he learned he was a top performer. Joshua said that worked his way up from being worried initially about the pandemic, to being confident in his abilities.

Annalicia agreed, saying: “First I was a little bit worried because they weren’t going into the classroom but we have this teacher in our village, Miss Zoe, that took him into her private class due to the pandemic and from then I knew that this was expected of him.”

Meanwhile, Paul said that it wasn’t too surprising that his son would be successful because he was diligent with his studies. As his father, he said that he couldn’t wait to celebrate further with his family. When it comes to his profession, Joshua plans to keep his options open.

While J’Kell Whyte of Success Elementary, who tied with five others in the fifth national position, couldn’t be present, his mother Oneika Edwards was there to represent.

Holding up a large photo of her son she said: “We are beyond proud — me and his dad. J’Kell is more excited than us. When I received the call last night I literally screamed because I was expecting him to get a top school but being in the top ten is a bonus.”

She commended the teachers who worked with him and noted that her son adapted to the COVID-19 environment without much difficulty. “He had all the necessities, he just had to stay focused and do what was expected of him,” Edwards said. J’Kell wants to become a pilot and his mother continues to encourage him.

Also excited about her results was Chelsea Persaud of Dharmic Rama Krishana who also placed fifth nationally with 521 marks. “I feel very elated and happy because every year I watch this ceremony broadcast live on T/V but to actually be here is a dream come through,” she said, beaming.

Chelsea was at the Center with her parents. She said when they got the call the night before requesting their attendance, she became excited. Preparing for the exam during the pandemic was difficult for her at first as she transition to virtual learning, however, she said that she persevered.

“I didn’t let that stop me, I still tried to study very hard. Even though there were some minor setbacks, I still continued, I didn’t give up because of the pandemic,” Chelsea said, noting that during her low moments her parents reminded her about the value of doing well.

The youngster wants to one day become a professional chef and open her own restaurant. She enjoys baking pastries and cake decorating.

Speaking with her mother Navenita Persaud, she said was proud of her daughter who is a very disciplined child and always willing to work.

“Those qualities are what helped her to achieve her goal and her goal was to attend Queen’s College,” she said. “She’s a very self-driven child.”

Sun Oct 17 , 2021
Support Village Voice News With a Donation of Your Choice. Oct 15 (Reuters) – The Pentagon has offered unspecified condolence payments to the family of 10 civilians who were killed in a botched U.S. drone attack in Afghanistan in August during the final days before American troops withdrew from the country. The U.S. Defense Department said it made a commitment […]