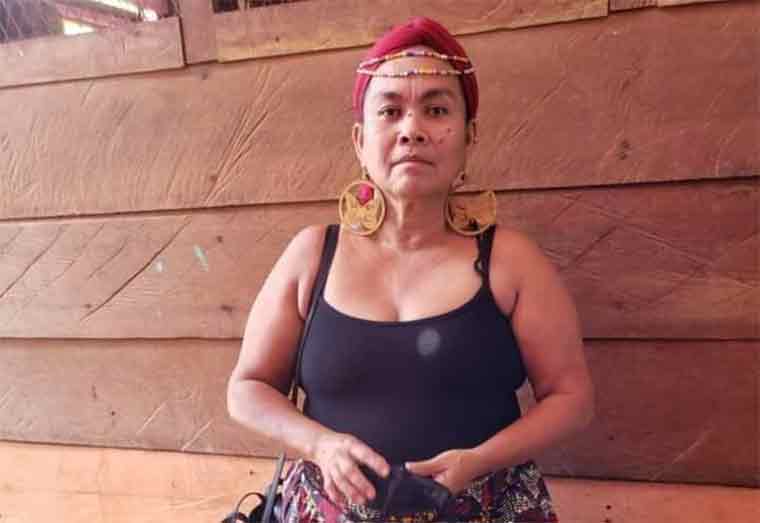 Police at Mahdia on Wednesday detained a man after the lifeless body of his parter was found dead in a pool of blood close to a shop she operates.
Dead is 50-year-old Denise Vieira.
Reports are that sometime after 1:30 pm on Wednesday, neighbours heard the woman arguing with her partner. Shortly after , customers went to the woman’s shop but got no response. However, her partner told them ” look she lying down there” and an alarm was raised.

It was then that blood was seen on the floor near her head and a crowd gathered as persons grew confused since Vieira was seen around 1:30 pm talking to her partner. A neighbour related that during the confusion, the victim’s partner was seen leaving the town and the police were notified. He was promptly arrested.

A police statement confirmed the murder, which took place at Pepper Hill, Mahdia. Enquiries revealed that the deceased resided in a flat concrete structure and operated a small grocery shop in the said building while the suspect who is her reputed husband, resides in the said yard in a wooden structure in a partly fenced yard.

Information received states that the suspect and the woman were together deceased for about eight years and that due to an ongoing domestic dispute between them for some months, the Vieira decided to build the mentioned concrete structure and lived by her herself about three months ago.

Further information received from the deceased’s neighbour states that on the date in question about 13:15hrs, she (neighbour) was at home when she overheard the deceased saying loudly, “Get out my (expletive) place, leff me alone.”

The suspect then proceeded into his house via the back door and indicated to the customer that he discovered the deceased on the kitchen floor motionless and appeared to be dead with what appears to be blood oozing from her mouth, nose and about her face.

He attempted to revive her by shaking her but she was unresponsive and he put her to lie on her back.

A report was then made to the police by neighbours. The body of the deceased was examined for marks of violence which were recorded by the police.

The body of the deceased was taken to the Mahdia District Hospital where it was pronounced dead on arrival and was placed into the said hospital mortuary awaiting post mortem.

The suspect was contacted, told of the allegation, cautioned and he denied. He was arrested and placed into custody. Investigations are continuing

Thu Oct 14 , 2021
Support Village Voice News With a Donation of Your Choice. ….ECLAC urges Caribbean countries The COVID-19 pandemic opens an opportunity to rethink and restructure education systems in Latin America and the Caribbean, and tackle the profound “silent crisis” that this sector is going through so as to prevent a generational catastrophe, agreed the specialists participating in the First Regional Seminar […]