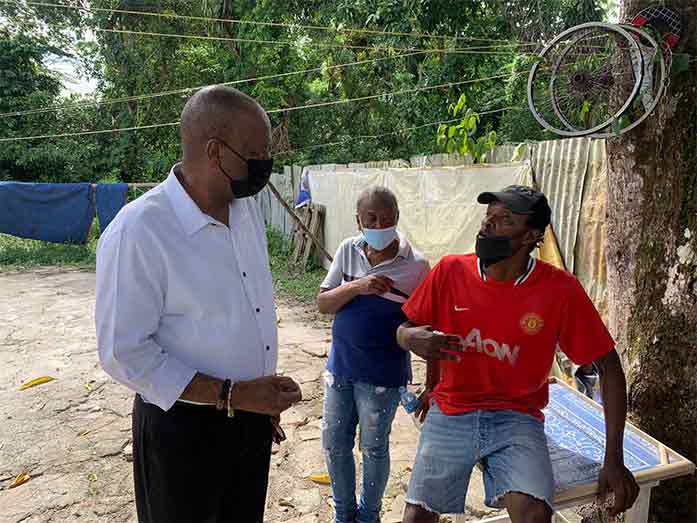 Close to one month after the deadly Dartmouth shooting, a 34-year-old Grove Housing Scheme man was fatally shot by the police – a trend, the Leader of the Opposition, Joseph Harmon said is concerning.

Thirty-four-year-old Kevin Andries was shot by the police, during what they described as an exchange of gunfire but the Opposition Leader, in a statement on Wednesday, said the evidence or lack therefore tells a different story.

“The latest victim was 34-year-old Mr. Kevin Andries who the police claimed was shot dead after an exchange of gunfire. The Force admitted that no gun was recovered from the scene. What then did Mr. Andries use to shoot at police ranks?” Harmon reasoned.

He said while the Guyana Police Force has alleged that the Grove Housing Scheme man was shot during an exchange of gunfire, the dead man’s family is contending that he was killed while being in handcuff.

“We, therefore, call on the Guyana Police Force to come clean on this matter,” Harmon urged.

The Opposition Leader, in making his case, alluded to matter involving Orin Boston, a Dartmouth, Essequibo Businessman, who was shot dead in his bed on the morning of September 15.

“We recall vividly, the police’s initial statement on the murder of Mr. Orin Boston of Dartmouth Essequibo. The world now knows that Mr. Boston was executed in cold-blooded by ranks of the Special Weapons and Tactical Unit of the Guyana Police Force,” he said.

The Opposition Leader is calling on the Guyana Police Force to make known the status of the investigations into the two cases. He has also called for the Force to use all legal means to apprehend persons who they feel may have breached the law.

“Since the beginning of this year, the Guyana Police Force has shot several young men, and in all the cases, the police versions appear similar. To this end, we have every reason to suspect that there is something sinister afoot and the citizens need to feel safe,” Harmon said.

He said the Opposition will not allow, what appears to be the new norm of the Guyana Police Force to kill citizens to grow and fester.

“We call on the Minister of Home Affairs and the Government of Guyana to make its position clear on these matters. The Government runs the risk of being perceived as complicit; as their continued silence on these extrajudicial killings can be interpreted as tacit approval of these alarming acts against Guyanese citizens,” he warned.

The Opposition Leader issued the statement shortly after he visited the family of Andries at this East Bank Demerara home. He was accompanied by Opposition Chief Whip, Christopher Jones; Shadow Minister of Home Affairs, Geeta Chandon-Edmond; Shadow Minister Social Protection, Natasha Singh-Lewis; and Member of Parliament responsible for the East Bank of Demerara, Nima Flue-Bess.

Man spends five years in prison although no evidence against him

Wed Oct 13 , 2021
Support Village Voice News With a Donation of Your Choice. ….judge says something fundamentally wrong with the justice system “There is something fundamentally wrong with a justice system when a citizen can be charged, committed and indicted when there is no evidence connecting the citizen with the commission of the offence,” Justice Jo-Ann Barlow said on Wednesday. According to a […]