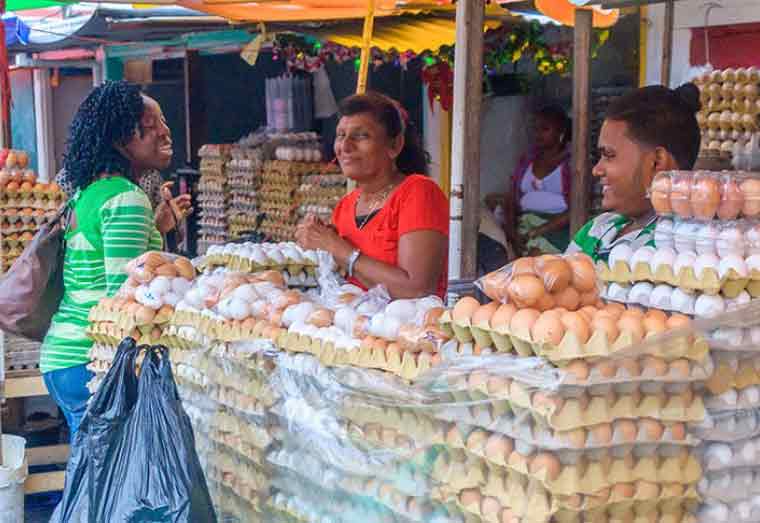 At the end of the first half of 2021, consumer prices grew by 5.6 percent, the Ministry of Finance has said.

Citizens across the country have been complaining about the rising cost of living here. In its Mid Year Report the ministry said the rising prices was largely driven by increased food prices, as a result of the inclement weather and shortages experienced following the flood.

Further, the Report indicated that the bottlenecks in the global supply chain adds some measure of imported inflationary pressures. However, the Report underscores, that the price increases are ‘transitory’ and are unlikely to have lasting long-term impact on inflation’. Inflation is now projected to be in the order of 3.8 percent for the full year.

Meanwhile, the report has indicated that Guyana recorded real Gross Domestic Product (GDP) growth of 14.5 percent while non-oil GDP grew by 4.8 percent, despite the challenges of the COVID-19 pandemic and even the devastating floods experienced in May-June.

The report states that due to the unprecedented floods which impacted particularly the agriculture, forestry and mining sectors, along with the lingering effects of the COVID-19 pandemic, the effects of which will spill over into the last half of the year and even beyond, the revised full-year forecast for real GDP growth in 2021 is now 19.5 percent overall and 3.7 percent for the non-oil economy.

The Mid-Year Report is expected to be tabled by Senior Minister of Finance Dr Ashni Singh at the first sitting of the National Assembly once the Assembly resumes after its current recess.

Meanwhile, the Report noted that the rice industry grew by an estimated 7.8 percent in the first half of the year, marginally lower than the target set for the period, ‘other crops’ declined by 7.3 percent due to the floods and the livestock industry was estimated to have grown by 10.6 percent when compared to the same period in 2020. However, for that same period, the fishing industry contracted by an estimated 6.6 percent and the forestry industry by 7.1 percent.

Referencing the extractive industries, the Report indicated that in the first half of 2021 the mining and quarrying industries were estimated to have grown by 23.1 percent, with higher output from the petroleum and other mining industries despite contractions in gold and bauxite.

It was noted that total output from the petroleum sector increased by 65.4 percent when compared to the same period last year. With respect to diamond, sand and stone, these were estimated to have seen a total growth of 63.3 percent with quarry stone having a growth output of 141 percent, sand declarations growing by 119.3 percent as a result of increased activity in the construction sector while diamond declarations improved with a growth of 166.3 percent. The outlook for the remainder of this year for other mining industries was estimated to be promising as well with an estimated growth rate of 74.5 percent for the entire year.

Wed Oct 6 , 2021
Support Village Voice News With a Donation of Your Choice. —–Anthony Minister of Health, Dr. Frank Anthony, MP said while Guyana’s Covid-19 vaccination programme has been making significant progress the country still has a far way to go to achieve herd immunity which experts now say has moved up to 90 percent. During Wednesdag’s COVID-19 update, the health minister explained […]