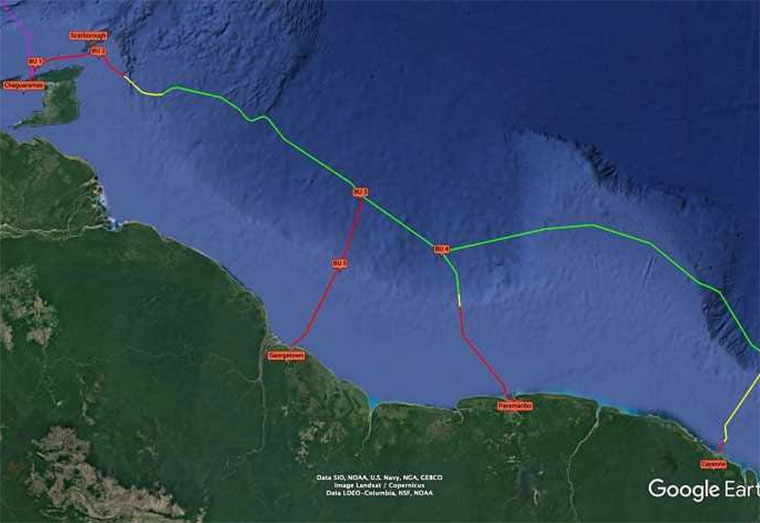 …providing best in class connectivity to the oil and gas industry

Aiming to supercharge connectivity in the Caribbean and Latin America, Digicel has made a significant investment in international submarine capacity with the build of its Deep Blue One subsea cable thereby connecting French Guiana, Suriname, Guyana and Trinidad and Tobago.

The move comes through a partnership agreement signed with Orange to extend the system from Trinidad to French Guiana. According to a statement from the Company, Deep Blue One will provide best in class connectivity to the countries with the opportunity to connect offshore oil and gas rigs on the back of the industry boom in the region.

Commenting on Digicel’s investment, Digicel Group CEO, Oliver Coughlan said: “With subsea fibre providing the backbone of the global economy and serving as a catalyst to economic development, our substantial investment in submarine capacity underpins our confidence in the development of the region. A great example of this is the connectivity options we will be able to provide, both onshore and offshore, to the oil and gas industries in countries like Guyana and Suriname as they capitalise on the boom in the region. ”

This build will complement Digicel’s existing Southern Caribbean Fiber network which has approximately 3,000 km of submarine cable connecting 20 islands in the Eastern Caribbean, running from Trinidad and Tobago up to Puerto Rico with onward connectivity to Miami and New York.

The 2,000 km cable installation for Deep Blue One has five branching units, plus the capability to provide connectivity for offshore rigs, with anywhere from two to eight fibre pairs in each segment, offering a minimum of 12Tbit/s capacity, per fibre pair.

Importantly, the cable is routed to be able to connect the many offshore oil and gas rigs and the build will include new cable landings in Trinidad, Tobago – with a new route between Trinidad and Tobago – and Suriname. With cable installation beginning in mid-2023, the project is expected to complete in early 2024.

As a major player in the submarine cable industry, with investments in over 40 cables worldwide, Orange will rely on its expertise to act as landing party in Cayenne for the French Guiana branch and to operate the cable landing station on behalf of Digicel while its subsidiary, Orange Marine, will be in charge of laying the cable.

Group Director International and Wholesale Business at Digicel Group, Peter Hobbs added: “As a Digital Operator serving over 13 million customers in 32 countries globally, we’re focused on driving economic opportunities for our customers. This is an exciting next phase for us – it’s about delivering quality, reliability, performance – and importantly, opportunity. We’re excited to get going on this.”

Digicel stated that beyond connectivity, this cable system will bring a full economical ecosystem for the benefit of all.

Sun Oct 3 , 2021
Support Village Voice News With a Donation of Your Choice. The Guyana Gold and Diamond Miners Association (GGDMA) continues to explore technologies to increase mineral recovery while reducing mercury use for local small and medium scale miners. To this effect the GGDMA and the Ministry of Natural Resources have signed an agreement for the acquisition of mineral processing technology that […]