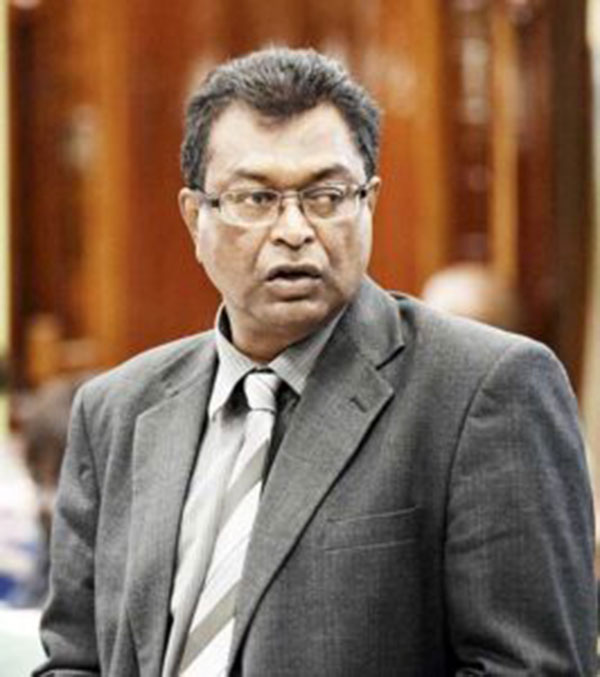 Former National Security Minister, Khemraj Ramjattan said on Friday that the Guyana Police Force (GPF) departed from standard operational procedures on September 15 when a Special Weapons and Tactics (SWAT) unit stormed the home of Essequibo businessman, Junior Orin Boston killing him while he was in bed with his wife.

Boston, a father of two, died Wednesday morning moments after he was shot at his Dartmouth residence at around 4:40hrs by a rank during a so called anti-crime operation in the Region. While the police, in their preliminary report, stated that there was a confrontation which led to the shooting, Boston’s wife said that husband was asleep when ranks stormed his room and delivered the fatal shot. Her version suggests there was no form of resistance.

Protests have since erupted in the region led by Boston’s relatives and residents of the community who knew him.

At a press conference on Friday, Ramjattan said that the AFC finds the matter to be unsettling and disturbing as the actions of the SWAT Team were “obvious violations of operational procedures and outright criminality” by the GPF.

WHY THE USE OF SWAT?

Answering questions about the expected procedures, the former Minister of Public Security explained that operational matters of the GPF – such as whether the SWAT team should travel to Essequibo for a raid – are outside of the directive of any Minister of Government.

Ramjattan explained further that the SWAT Team is only used when there is a threatening or violent situation or the possibility of such. Other matters of investigation or raids that pose less danger are dealt with by detectives and other ranks.

“Why these arrests could not have been in a normal course by local detectives trained in these matters is a question that must be answered properly by the Guyana Police Force,” Ramjattan said.

“The SWAT is for almost like a national security issue…there was not, in my deduction, [a need] for the usage of SWAT in Essequibo in those circumstances, and that is why I now understand the Crime Chief and Deputy Commissioner is saying that up to now, they haven’t gotten any reason as to why that SWAT team was there to make the arrest.”

NO GOOD EXCUSE
The GPF has denied claims that it attempted to conceal the true sequence of events surrounding the shooting to death of Boston. It has stated that the killing of Boston was no “act of murder” even as the SWAT rank who fired the fatal shot has been placed under close arrest and an investigation is ongoing.

Ramjattan told the media on Friday that the explanation of why the incident occurred as given by the GPF is worrying. He alleged that it can only point to outside political forces instructing the leadership of the GPF.

“The explanation from headquarters that it was unaware of why this invasion of homes of innocent Essequibans that morning of September 14, 2021, has set a rot in the reputation of the Guyana police force – a reputation which noticeably had been stabilized under the APNU+AFC administration during 2015 to 2020. It is evident that operational matters are being decided and instructed from a source other than the leadership of the Guyana Police Force. That could only mean political interference,” Ramjattan said.
He further accused the current Administration of demoralising the professionalism of the GPF in other ways such as through invalidating the Police Associations Elections.

Ramjattan has joined the lawyers representing Boston’s family in calling for an independent investigation to be conducted by external experts into the death of the businessman.
He said: “The AFC calls for an independent inquiry, preferably from overseas, into this recent rampage, destruction and death by members of the Guyana Police Force.”

He said that the relationship of trust between law enforcement and the community necessary for a well-functioning Police Force has been gravely affected and replaced with the fear and apprehensiveness of Essequibans residents.

Over 20 schools hit by COVID

Sat Sep 18 , 2021
Support Village Voice News With a Donation of Your Choice. —GTU blames situation on poor planning Over 20 nursery and primary schools in Guyana have been forced to temporarily close their doors after children, teachers and auxiliary staff have come down with cases of COVID-19 less than two weeks after reopening to face-to-face learning. On September 15, it was Minister […]