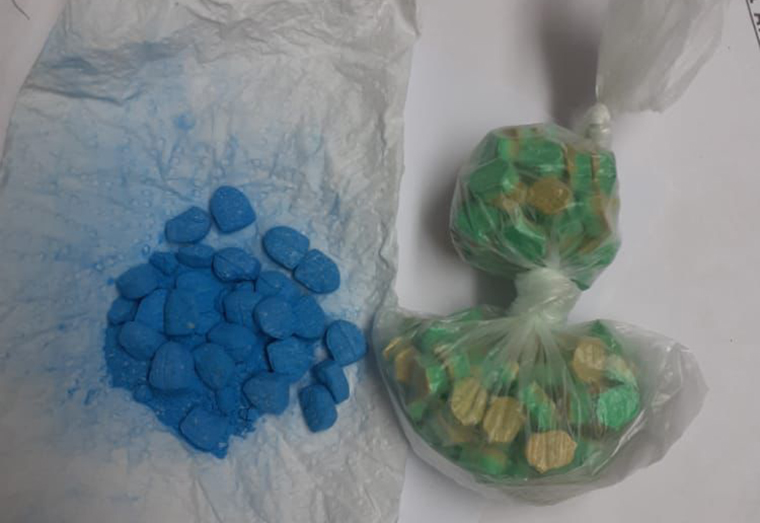 A party of police on roadblock duty arrested a 33-year-old man on Monday who was found with 38 grams of ecstasy hidden in a shoe belonging to him while travelling in a car with other passengers.

According to reports, while on duty at the Helena # 2 Public Road, Mahaica, police stopped motorcar a silver grey Premio which was proceeding west along the said road with a driver and four passengers.

A search was carried out in the car where a black plastic bag was seen in its trunk. Police enquired from the passengers about the bag and the 33-year-old male claimed ownership.

A further search was carried out in the said bag in their presence and a black plastic bag was found hidden in a right side shoe. Upon opening same, a quantity of blue, green and yellow tablets, suspected to be ecstasy, was unearthed.

The suspect was told of the offence committed, arrested and escorted to the station where he was cautioned. He told the police he has a son sick with cancer and he is unemployed, so he does this as “a lil hustle”.

The said ecstasy was checked in his presence and amounted to 88 tablets which weighed 38 grams. Further investigation is in progress.

Tue Aug 24 , 2021
Support Village Voice News With a Donation of Your Choice. A 72-year-old man was robbed of $187,000 in cash collected from the Leonora Post Office on Monday while he was entering a pharmacy on the Leonora Public Road, West Coast Demerara (WCD). According to police report, the victim went to the post office on Monday at about 10:30 hours where […]