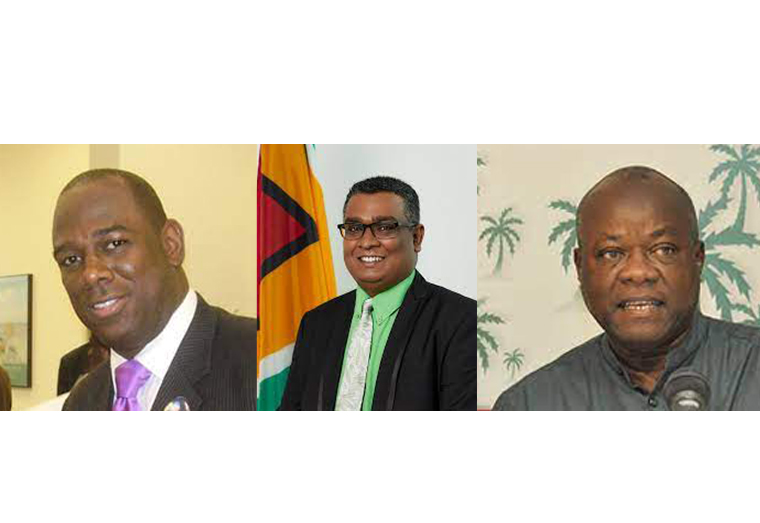 Political Scientist and Executive Director in the Office of the Leader of the Opposition, Aubrey Norton said Guyana is retrogressing into a racist, dictatorial state under the People’s Progressive Party/Civic (PPP/C) regime, and Guyanese must resist this authoritarian move.

Addressing Guyanese at a recent Town Hall Meeting in New York organised by the Guyanese Organisations Against Racism (GOAR), Norton said while the Irfaan Ali Administration has repeatedly spoken about ‘One Guyana,’ it continues to marginalise a large percentage of the population while giving preferential treatment to those closely aligned to the PPP/C.

Norton said to further compound the situation, the PPP/C Administration has taken control of the Guyana Police Force. “At this stage in Guyana, we are facing a police force that is being dominated and controlled by the People’s Progressive Party, and so as a result of that, we expect drug trafficking to increase again, we expect trafficking in persons to increase again, because it is a criminal regime,” he posited.

Between January 1 and August 9, 2021, Guyana, according to the Guyana Police Force, recorded 78 murders, 187 rape cases and 352 robberies under arms. Additionally, 536 kg of cocaine and 153 kg of cannabis were seized by the police during the same period.

Crime aside, Chairman of the Police Service Commission (PSC), Assistant Commissioner of Police (Ret’d), Paul Slowe has accused the President Irfaan Ali of interfering in the work of the Commission – an independent constitutional body – in an attempt to have police officers aligned to the government appointed to senior posts. The entire Police Service Commission has since been suspended by the President – a move which is currently being challenged in the High Court.

According to him, under the A Partnership for National Unity + Alliance For Change (APNU+AFC) Government (2015-2020) democracy thrived. “…the police force was allowed to operate professionally, the judiciary was allowed to operate independently, and now we are seeing a reversal of that,” he posited, while contending further that the PPP/C is also practicing digital oppression and “jumbee economics.”

Norton said from all indication, the APNU+AFC is better at governance than the PPP/C.

“We must recognize that for the last five years, that Guyanese felt a freedom…In under a year, we have returned Guyana to a place of ethnic tension,” he posited, while iterating that the PPP/C is “no good” for the country.

APNU+AFC Member of Parliament, Ganesh Mahipaul, who was among speakers at the Town Hall meeting, also pleaded with Guyanese resist racist politics. Like Norton, MP Mahipaul submitted that the Coalition Government was a Government for all the people.

“The coalition – the APNU+AFC – stood and continue to stand for national unity. They continue to stand for togetherness, love, harmony, and they have displayed that during their five years in office. The coalition did not discriminate against black communities and Indian communities; I say that with confidence. I live in Region No. 3, a predominantly PPP region. Wakenaam where the coalition got 300 votes, and the PPP got 2000 votes, received under the coalition, 100% asphaltic road around the island,” MP Mahipaul reasoned.

Maintaining that racism is real in Guyana, the Opposition MP said upon taken office in August, 2020, the Ali Administration dismissed thousands of workers in the public sector – the majority of them being Afro-Guyanese. He said many families residing in communities dominated by Afro-Guyanese were not provided the $25,000 COVID-19 Cash Grant though the grant was intended for all Guyanese.

MP Mahipaul said it is important for the Coalition to return to office, however, it must strategise, address deficiencies within the umbrella body and regain the trust of the voting population.

“We must ask ourselves, what the coalition did wrong, so we could correct those missteps, and we can correct those errors, and going forward we must not repeat them,” he reasoned while underscoring the importance of the power of the people. Further he warned against division. “If you see a problem, you don’t go and create a fraction and multiply the problem for it to become a monster in their faces,” MP Mahipaul said.

Rickford Burke, President of the Brooklyn, New York-based Caribbean Guyana Institute for Democracy (CGID), who was the third and final speaker, railed into the Attorney General and Minister of Legal Affairs, Anil for allegedly plotting to kill him.

This past week, the Guyana Police Force said it was informed by the New York Police Department that a complaint filed by Burke in New York against Nandlall was dismissed as frivolous and vexatious. According to the Force, the Attorney General was never wanted by the US law enforcement agency but Burke, during the Town Hall Meeting, said such is furthest from the truth.

Burke also rebuked Prime Minister Mark Phillips for attacking US Congressman Hakeem Jeffries, who last Sunday, condemned the racist politics being employed in Guyana, and in doing so, called for the removal of US Ambassador to Guyana, Sarah-Ann Lynch.

In an attempt to up the press on the Ali Administration, Burke said US companies will be warned not to engage the PPP/C Government. “We are going to write every US company operating in Guyana and inform them of the racism, then we will invite the black lives matter and action network to join us in those letters,” he posited.

Burke also called for the Office of the Leader of the Opposition in Guyana to receive adequate funding and also for the equitable distribution of all relief grants. “The first thing we are telling them is restore the resources of the people of Guyana back to the opposition office, restore it. The resources of a country don’t belong to the PPP. Second, the COVID grants and the school grants ensure that they are equitable, ensure that every community benefits for the people’s resources,” Burke said. The GOAR Town Hall Meeting formed part of a series of events being held in the US intended to raise awareness on the challenges facing Guyanese.

Sun Aug 22 , 2021
Support Village Voice News With a Donation of Your Choice. …Lindener ‘juicing it up’ with OG Self Made Fruit Juice By Naomi Marshall The beverage industry is a large sector and includes a wide variety of drinks including energy drinks, sodas, coffees and teas, sparkling waters, and alcoholic beverages. However, as the population becomes more and more health-conscious, healthy drinks […]