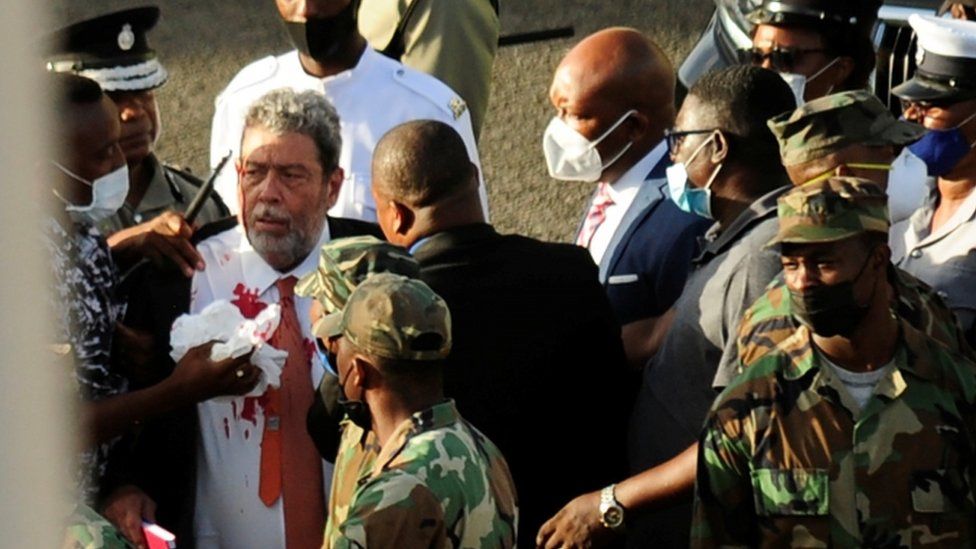 With the aim of achieving herd immunity through COVID-19 vaccination, some CARICOM Governments have pursued or are contemplating mandatory vaccination which has led to protest in some cases.

Of the 15 CARICOM countries, at least four — inclusive of Guyana — have experienced protests and push back from various organisations and groups defending their right to choose whether to be vaccinated or not.

However, most Governments in CARICOM have opted not to make COVID-19 vaccination mandatory, at least not yet. These Governments are instead educating citizens about the vaccines and encouraging them to take the jab.  In this article, the Village Voice News gathered information on the vaccination efforts of each CARICOM country save for Guyana.

Antigua and Barbuda received its first batch of COVID-19 vaccines — AstraZeneca/Oxford — through the COVAX Facility on April 8, 2021. Over time, additional vaccines were received and administered as the Government hoped to move towards achieving herd immunity. Then, on July 21, a vaccination policy was communicated in a memorandum sent to government departments indicating that frontline government workers would be required to either get the COVID-19 vaccine or get tested for the virus every two weeks at their own expense.

The Antigua Observer reported on August 11 that a group called the ‘Freedom Fighters’ were leading protests in the country. The group had issued a release indicating its protest against the violation of their human rights. Subsequently, their Police Commissioner, Atlee Rodney told media at a press conference that members of the group could face prosecution once there is evidence to suggest that they continued to organise marches that were illegal.

One recent demonstration in the country’s capital, St John’s, became heated when officers deployed tear gas and fired rubber bullets in what many residents considered as an inappropriate use of force, although police chiefs continue to defend their tough measures.

In The Bahamas, Prime Minister and Minister of Finance, Dr. Hubert Minnis announced on August 9, 2021, that, over the next few months, The Bahamas will have the capacity to vaccinate all Bahamians and residents who wish to receive the vaccine. He made it clear in a national address that there will be no mandatory vaccination. “My Government will not make vaccinations mandatory. We understand that some Bahamians still have questions. Some Bahamians still are doing research. Some are still uncertain. We will continue to work day in and day out to make vaccines available to everyone who wants to be vaccinated. We will continue to provide medical and scientific information to help you make your decision. But be assured that my Government will not force Bahamians to be vaccinated,” the Prime Minister stated. As of 9 August, 109,616 doses of the vaccine have been administered since the vaccination program began in mid-March 2021. The Prime Minister has informed citizens that getting vaccinated is key to fully opening the economy.

A decision on whether vaccinations will become mandatory in Barbados is pending. The country’s Government has not yet made such a policy decision and is, instead, currently engaging in consultation. Barbados Attorney General Dale Marshall has been tasked with providing the Government with a legal opinion on the criminal and civil liability associated with mandatory COVID-19 testing and vaccination. As the Government decides, thousands of Barbadians have been protesting against the possibility. A coalition group called the ‘Barbados Concerned Citizens Against Mandated and Coerced Vaccination’ has been insisting that COVID-19 vaccines should not be made mandatory.

The Belize government is also exploring the possibility of mandatory vaccination for citizens. Their Cabinet has requested the Attorney General to seek medical expertise from the Ministry of Health and Wellness to explore all necessary legal measures that the government may lawfully implement to help contain the spread of COVD-19, including options to implement mandatory coronavirus vaccinations. This is being examined for both the public and private sectors which could include vaccination passes for the use of public spaces and for business facilities. Thus far, all police formations, commanders and all those in authority over other police officers have been required to be vaccinated. Frontline workers are also expected to be vaccinated.

Already, over 141,000 persons have received at least one dose of the vaccine, while over 56, 000 are fully vaccinated. The country has a population of approximately 390,000. Belize has recorded over 340 deaths and over 14,000 positive cases.

COVID-19 vaccination in Dominica has not been made mandatory as citizens are simply being encouraged to take the vaccine and informed of the benefits. “Let us go out and take the vaccine, it is not mandatory and all this talk about mandatory, I am not in that thing about mandatory vaccination…though we have clear legal advice that the constitution allows this to happen and this is done from legal luminaries outside Dominica, but I am not going to get into this,” the country’s Prime Minister, Roosevelt Skerrit said in August.

Of Dominica’s approximately 71,000 population, there has been no COVID-19 death recorded and over 500 confirmed cases. Over 21,000 have been vaccinated with the first dose while over 19,000 have received the second.

There is no mandatory vaccination in Grenada, however, Prime Minister Dr Keith Mitchell announced in April that all staff at quarantine facilities for incoming passengers will have to be vaccinated soon. Over 21,000 have received their first dose of COVID-19 vaccine while over 17,000 have received both doses.

So far, the Haitian Government has not imposed the vaccination obligation on citizens. However, some Haitian organisations such as ‘Food for the Poor’ have asked that workers be vaccinated or present a negative PCR test every Monday to have access to the building. Of Haiti’s whopping 11.26 million population, only over 16,000 people have already taken the first dose of a COVID-19 vaccine. As of July 13, Haiti was the only country in the Americas without a single dose of a COVID-19 vaccine. On July 14, it received 500,000 doses of vaccine donated by the U.S government through COVAX. Haiti has recorded over 500 COVID-19 deaths and over 20,000 cases.

On August 9, 2021, Prime Minister of Jamaica, Andrew Holness assured citizens that the Government has no plans to make COVID-19 vaccination mandatory.  “As it stands now, and we have discussed it in Cabinet, the Government is not thinking about, nor inclined to mandate any vaccines. In fact, we don’t believe that is something that would meet the constitutional test. We have ensured that whenever vaccines are available in Jamaica, [they] meet the highest standards of approval and we have not brought in any vaccines unless they were first of all World Health Organization (WHO) approved,” he said.

Holness said that while other countries got started with their vaccination programmes ahead of Jamaica, “because they took certain decisions,” the Government decided to wait in the best interest of the people of Jamaica. Of the country’s 2.9 million population, over 255,000 have received the first dose of the vaccine while over 134,000 have received the second. Jamaica has recorded over 1,200 deaths and over 56,000 cases.

There is no mandatory requirement for COVID-19 vaccination by the Government of Montserrat although it has encouraged persons to take the jab. However, observing the protests across several Caribbean countries where governments are considering or have enforced mandatory vaccination, President of the Montserrat Civil Service Association, Nyota Mulcare, on August 10, reminded the public about the importance of vaccination remaining a choice.  To date, over 1,400 persons on Montserrat have taken the first dose while over 1,000 have taken the second dose of the country’s 4,992 population.

Health Minister, Moses Jn Baptiste stated on August 10 that the Government of Saint Lucia will not be making it mandatory for citizens to take the COVID-19 vaccine. A robust education campaign is being planned to encourage testing and to encourage the public to get vaccinated.

Saint Kitts and Nevis has no mandatory vaccination requirement by the Government. In terms of vaccinations, 15,500 people received their first dose and over 10,600 received two doses. There have been over 600 infections and 3 coronavirus-related deaths within the country’s 52,000 population.

SAINT VINCENT AND THE GRENADINES

In Saint Vincent and the Grenadines, Prime Minister Dr Ralph Gonsalves was hit on the head with a stone amid a protest against changes to the Public Health Act that would make COVID-19 vaccination mandatory. The protest was organized by unions representing nurses, police and other workers who fear COVID-19 vaccinations could be mandated for some employees by the government.

Gonsalves was on his way to parliament to amend emergency health laws when he was hit by the rock as he walked through a group of about 200 protesters. Police say they have arrested the main suspect. The country has recorded over 2,300 cases and 12 deaths. Over 15,000 have received their first dose vaccine and over 10,000 their second. The country has a population of approximately 110,000.

However, recently, some in society have been voicing their support that companies should oblige their employees to be COVID-19 vaccinated to work. Several individuals pressured by their employers to vaccinate have sought legal advice.

Of the country’s 581,000 population, over 26,000 have tested positive for the virus and over 670 have died. Suriname has administered at least 267,988 of first and second doses of COVID vaccines so far.

Government-mandated vaccinations is not under active consideration by Trinidad and Tobago’s Cabinet but Prime Minister Dr Keith Rowley said if the COVID-19 situation changes, Government could possibly examine mandatory vaccinations.

However, the Tobago Business Chamber has called on the Government to enact mandatory COVID-19 vaccine laws to allow certain sectors to reopen. The country has already vaccinated over 430,000 with the first dose and over 271,000 with the second, compared to its population of 1.3 million. There have been over 41,000 recorded cases of the virus and over 1,100 deaths.

‘Vaccination hesitancy does not benefit Guyana’

Mon Aug 16 , 2021
Support Village Voice News With a Donation of Your Choice. —US-based Guyanese nurse cautions  …says the Gov’t has a responsibility, but so do the people  By Lisa Hamilton   Fear, religious beliefs and conspiracy theories are among the major factors contributing to vaccination hesitancy in Guyana. However, a Travel Nurse working in the United States, Ronessa Mingo, has observed the vaccination […] 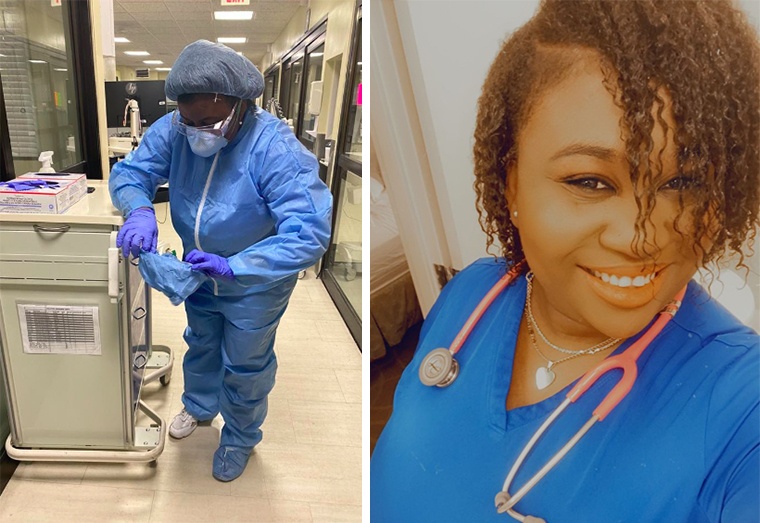