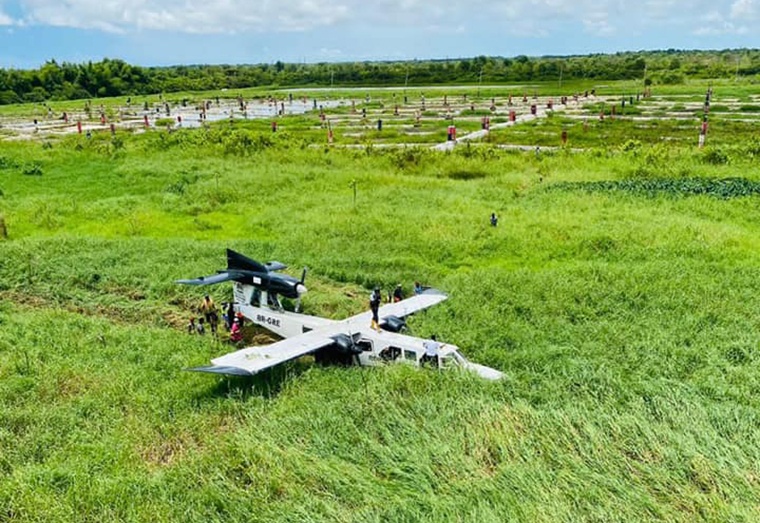 Reports are that the aircraft, which bears registration 8R-GRE , was heading to the Eugene F Correia International Airport at Ogle around 10:30 when the pilot reported an engine failure.

According to airport officials, the aircraft was lined-up on the final approach to land when tragedy struck. Five persons were on board at the time and reports are that one person was seriously injured. That individual sustained a broken leg.

Reports are that the aircraft, which has three engines, was some 3 miles out when the pilot reported to the air traffic controllers at Ogle about his distress. He then took action to ensure the safety of those on board. A resident in the area noted in a Facebook post that he heard the aircraft sounding unusual and when he looked out, he saw the aircraft descending rapidly . It then restarted and the engines died as it touched the ground.

Aviation officials noted on Saturday that the multi- engine aircraft should not have experienced such an accident. It was noted that several factors, including pilot error may have contributed to the crash. Members of the Guyana Fire Service raced to the scene while the injured were rushed to the hospital for treatment by members of the Guyana Defence Force aided by a helicopter.

This is the second aircraft crash to befall the company within the past three week. On July 28, a Britten Norman Islander operated by Roraima crashed while departing from the Aricheng aerodrome in Region Seven. The pilot, who was the lone occupant at the time , escaped injured.

Sun Aug 15 , 2021
Support Village Voice News With a Donation of Your Choice. —govt also moving ahead with $500M infrastructural upgrades to facilitate large-scale production  Agriculture Minister Zulfikar Mustapha on Friday visited the Dubulay Ranch, which is located approximately 70 miles south of Georgetown along the Berbice River, to get a first-hand look at the ongoing corn and soya bean trial cultivation there. […]