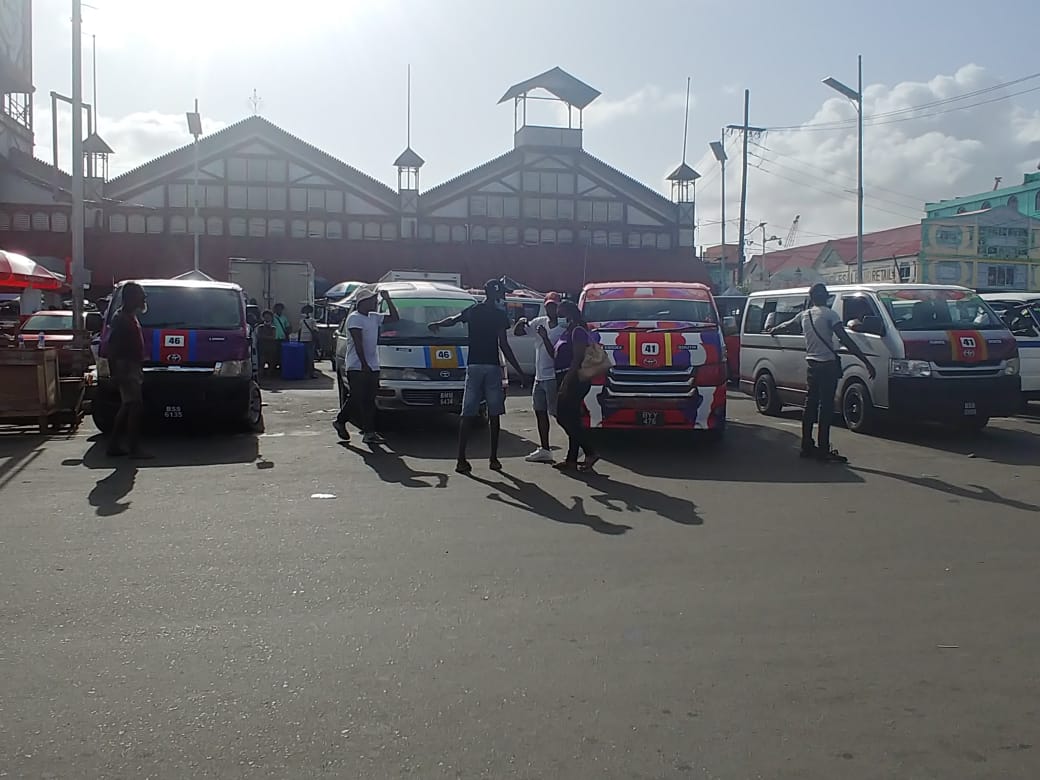 Come Monday, minibus operators across Region Three (Essequibo Islands-West Demerara) and Region Four (Demerara-Mahaica) will withdraw their service in protest of the increase in fuel prices, the high cost of living and the mandatory COVID-19 vaccination requirement being enforced by the Government on Public Transportation operators. Operators in other parts of the country, including Linden, Region 10 are likely to protest as well.

Members of the United Mini-bus Union (UMU), during a meeting at the Critchlow Labour College on Thursday, took a unanimous decision to protest not only the imposition of the COVID-19 vaccine requirement on minibus operators but also the rise in cost of living.

With effect from August 1, 2021, public transportation operators are required to show proof of vaccination in order to ply their trade.

In an interview with the Village Voice Newspaper, President of the UMU, Eon Andrews said both drivers and conductors have long expressed concern about the escalating fuel prices and the domino effect on the cost of living. He said the imposition of the COVID-19 vaccine on minibus operators has compounded the situation.

“Due to the increase in fuel prices, there is this great increase in [the cost of] food stuff; and when you have to pay more for gas, and then you have to find food stuff, and then the road is extremely slow, it becomes difficult, so we came here to decide on a course of action,” Andrews told the Village Voice Newspaper. He said union is contemplating a number of options including legal action as well as protest action.

Zooming in on the COVID-19 vaccine requirement for public transportation operators, Andrews said both drivers and conductors have vowed to resist the imposition. “We do not believe that anyone should impose the vaccine on us,” Andrews said while noting that the imposition is a human right violation. In doing so, he referenced to the Nuremberg Code and the Declaration of Helsinki.

The UMU President told Village Voice Newspaper that vaccine hesitancy, in part, is as a result of a number of unanswered questions surrounding the COVID-19 vaccines being offered in Guyana such as the Sputnik-V vaccine.

“We need to get more information so that we can make an informed choice as to whether we want to take it or not,” Andrews said. He contended that while the Ministry of Health has indicated that the vaccine prevents hospitalization and even death, such is not necessarily the case.

Consultant to the United Mini-bus Union (UMU), Harry Baptiste also registered his objection to the mandatory vaccine requirement. “Authorities around the world have become complicit in official murder of its citizens by making this vaccine either mandatory or by coercing people into taking it. There has not been any medical institution in any part of this world that has given full approval for this injection that they are masquerading as a vaccine, and for the Guyana Government to say that Guyanese must take this vaccine or be denied access to certain services or to institutions or to suffer any kind of penalty is grossly immoral and unlawful,” Baptiste told this publication.

Currently, Pfizer, Moderna, AstraZeneca, Johnson and Johnson and SinoPharm are among vaccines that have received Emergency Use Listing or Authorization (EUL/A) from the World Health Organisation (WHO).

Baptiste like Andrews, in objecting to the imposition of the COVID-19 vaccines on Guyanese, referenced to the Nuremberg Code and the Declaration of Helsinki.

“I invite the president, the minister of health, the head of internal medicine of the public hospital in Guyana, the COVID-19 Task Force, anyone in authority, I dare them and I invite them to educate themselves with the Nuremberg Code and Helsinki Declaration. I for one, will not allow any of them to vaccinate me or to even to give me a COVID test, and I will demand my right to access to any service for which I am entitled to and for which the Constitution of this country entitles me,” Baptiste said.

He said it is unlawful for the government to make the vaccine mandatory for minibus operators as well as regular Guyanese seeking public services. He said there are many unanswered questions.

“They must prove to me that all the cases that they are publicizing as COVID-19 positive are indeed and in fact confirmed by proof and secondly, that the vaccinated persons have not been able to spread the virus and are immune. And by their own admission that is not so because they are also saying that even if you get the vaccine and you are fully vaccinated you can still spread the virus,” he said.

Referencing to statements emerging from the US Center for Disease Control and Prevention (CDC), Baptiste said it has been confirmed that fully vaccinated people can not only contract COVID-19 but also transmit the virus. Importantly the CDC has also indicated that the vaccines prevent severe illness and death. “Why do I need a vaccine if it doesn’t protect me from the virus,” Baptiste questioned.

Esther Crawford – a minibus driver who plies the Georgetown to Patentia Route – told Village Voice Newspaper that due to health complications she has opted not to take the vaccine.

“I have health issues that came down from my family and I am very serious where this particular vaccine is concerned, and I don’t need it,” Crawford said.

Contenting that the vaccine does not protect against the virus, the minibus driver said Guyanese should be given the right to choose.

“I feel persons have the right to choose if they should take this vaccine or not, and they should not be forced,” she posited.

Another bus driver, Pastor Felix Walker, told this newspaper that he will not take the vaccine.

“I think I have a choice to my own body, this is my body, and I determine what gets into my body. And as of now, I don’t mind who take the vaccine but I am not taking the vaccine. For me it is not proven that it will do me any good, so I prefer to continue to live, how I am living,” Walker said.

Walker plies the Georgetown to Grove route. He said since the start of the pandemic in March 2020, he has never contracted the virus.

“From the time COVID start to now, I have had no symptoms, I am 76 years young, and I had no COVID symptoms, why should I put something in my body now to prevent the thing that I haven’t got,” he reasoned.

He said the protest is intended to bring attention to the masses as well as the authorities, the concerns of minibus operators. “To sensitise the people, we will be withdrawing out services for several reasons. Not only for the COVID vaccine, but the high increase in gasoline prices, and the high cost of living, which is affecting the general population,” he explained.

Under the new COVID-19 Emergency Measures which took effect on August 1, unvaccinated persons are not permitted to visit public offices without appointments while persons seeking to utilize restaurants, bars, conference facilities, banquet facilities, casinos, and betting shops must present their vaccination cards and Identification (ID) Cards before access can be granted.

In a statement on Thursday, the A Partnership for National Unity + Alliance For Change (APNU+AFC) said the People’s Progressive Party/Civic (PPP/C) Government has taken a dictatorial approach towards vaccine hesitancy as against one of consultation and collaboration.

“The APNU+AFC Coalition continues to encourage persons to take the vaccines as they become available. We, however, call on the PPP regime to desist from their dictatorial approach in handling this pandemic and to instead adopt a consultative and collaborative approach which respects the fundamental rights of our citizens,” APNU+AFC said.

There has also been widespread condemnation of the mandatory COVID-19 vaccination policy taken by the Irfaan Ali Administration.

Broomes not done with politics