…as police probe shooting of woman

Reports are that Singh was sent on leave this week as police investigate the shooting of  25-year old  Gladys Emmanuel. The vehicle in which the shooting occurred was also seized by the police.

The young former beauty queen sustained a gunshot wound to her abdomen while she was in a vehicle in the company of Singh in the vicinity of the Main Access road near the Kanuku Hotel at the town of Lethem sometime before 1 am last Wednesday.

After deeming the shooting an “attempted murder”  initially, police later stated that the incident was “accidental” . At the same time , the woman’s mother, Valerie George,  says she will not accept any forms of compensation for her injured daughter until the matter passes through the courts.

George, who spoke about the incident on Member of Parliament , Sherod Duncan’s live programme “ In the Ring” on Thursday evening, recounted the ordeal even as she held out that she is seeking justice for her daughter who works at a pharmacy in Lethem.

The woman accused the REO of lying to her about what transpired ; she alleged that the 33-year old man informed her that Emmanuel was in his company when she was injured. But he told the woman that her daughter stabbed herself.

“He said yes, I was with her , I didn’t carry her out but I offered to bring them home, “ the man told the worried woman. George  said the REO then informed her that her daughter “stabbed herself” and he alleged that he also had a gun in the vehicle at the time of the alleged stabbing. “That is the exact thing he told me at the time,” she said, noting that she was confused.

The woman said at that point she saw scratch marks on the REO’s left arm and she got even more confused since her daughter told her minutes earlier on the phone that she was shot.

George  recalled that when her daughter was giving her statement to the police she saw a large mark below her neck from the chest up. The woman said she strongly believes that there was a scuffle between her daughter and the REO , noting that it appeared the two had a scramble.

She said she does not work and her husband, former Toshao of St Ignatius, Dennis Benedict , is sickly and he is unable to work.

“Any help I will receive is after court, it must go to the court, “ the woman’s mother insisted, noting that she is not accepting any form of compensation until the matter is passed through the courts.

“Thank God that she is alive today, and when she  comes out of the hospital, I am the mother and I have to look after her,” she said.

George reiterated that  she will not see the matter “go down just like this” noting that she is thinking about all young indigenous women as she seeks justice for her daughter. “We must not be suffering like this all the time, rich people must not be mashing us down , we have equal rights as human beings, “ she added. Police released Singh on bail sometime on Thursday.

The incident has sent shockwaves throughout the region and further afield as many have noted the silence of indigenous leaders and women’s rights groups. Women at the town of Lethem and within the Rupununi have called on the authorities to fully investigate the matter while residents of the region said they believe the matter will be swept under the carpet.

Shadow Minister of Home Affairs, opposition MP Geeta Chandan-Edmond in a statement condemned what she described as “the abhorrent and abominable shooting of 25-year old indigenous woman Gladys Emmanuel.”

“Every life is precious in our dear beloved Guyana and the attempt to end the life of one of our precious citizens, especially a young promising woman, is sadistic and inhumane. Though far less significant, I also note that this incident occurred in breach of the COVID curfew measures. This development is symptomatic of the breakdown in law and order in our society since August 2nd, 2020. The Guyanese people have witnessed a significant increase of violence against women and this latest heinous violation of one of our young indigenous women allegedly hands of a high-ranking PPP official must be condemned by all Guyanese.”

The MP called for a thorough investigation of this incident, free from political interference. She said the investigation must be concluded speedily so that the all wrongdoing must be dealt with condignly to the fullest extent of the law.

Tue Jul 27 , 2021
Support Village Voice News With a Donation of Your Choice. …says Minister of Health, Dr. Frank Anthony  Minister of Health, Dr. Frank Anthony has stated that soon Guyana will be implementing “explicit travel instructions” in relation to the COVID-19 pandemic, an announcement that came not long after the country implemented a mandatory ‘vaccination passport’ for non-nationals coming through Trinidad and […] 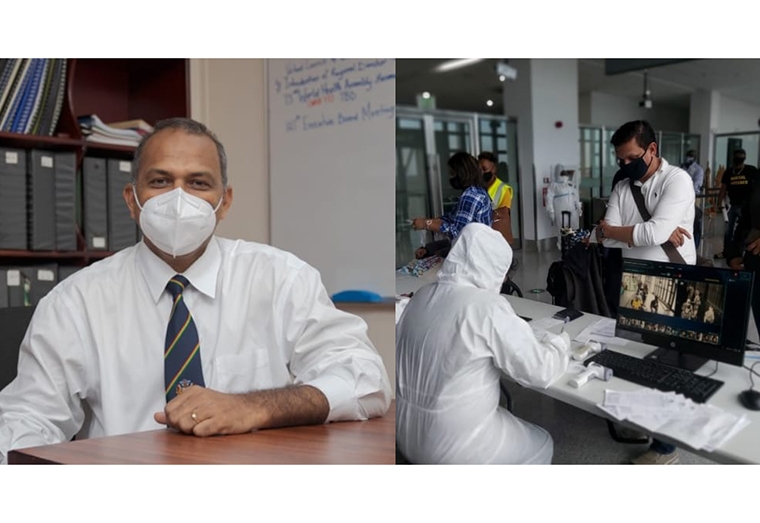