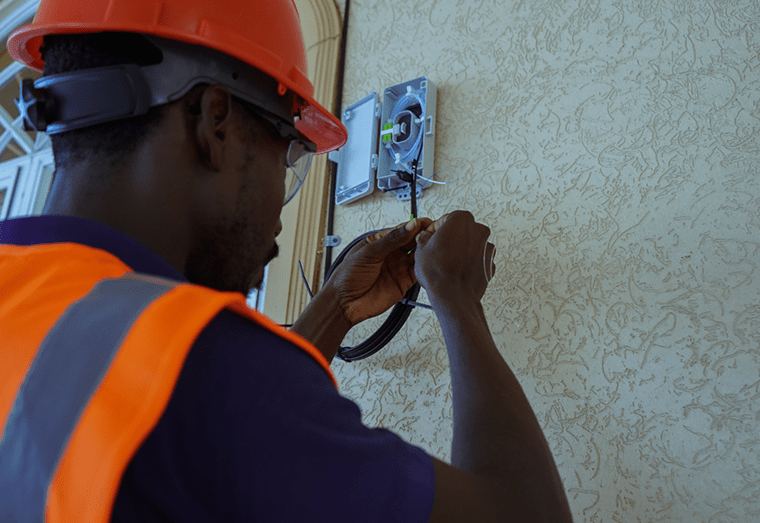 The Guyana Telephone and Telegraph Company (GTT) is aggressively pursuing plans to upgrade its mobile network to 4.5G LTE as part of a multibillion investment for 2021.

Currently, the communication giant offers Guyanese the 4G Long Term Evolution (LTE) experience – a next generation wireless communication of high-speed data for mobile phones and data terminals. The 4G LTE, recognised as Fourth Generation Mobile Technology, is the fastest mobile data connection currently available in Guyana, however, GTT is also aiming to provide Guyanese with the 4.5G LTE experience. According to Active Telecoms – the ICT Global News Platform – 4.5G offers download speeds that are 4 to 5 times faster than that of 4G, far greater spectrum efficiency and use of heterogeneous network.

In an exclusive interview with Village Voice News, GTT’s Chief Executive Officer (CEO), Damian Blackburn said the communication giant has applied to the Telecommunications Agency for the relevant spectrum needed to roll out the 4.5G LTE network.

“In order to operate a mobile network, we need spectrum and so we are awaiting the government to allocate us the relevant spectrum we need. So that is an ongoing industry discussion post liberalization, and soon as that [is] concluded we will be ready to launch a new LTE network – a 4.5G LTE network, and so we are just waiting,” Blackburn told this newspaper.

According Blackburn, who took office in May, GTT has provided Government with all of the requisite documentation, and is hopeful that the necessary approvals will be granted before the end of the year. “On our side of the fence, in terms of our engineering plans, we have made all of the plans that we can to make sure we make this happen,” he added.

Once the spectrum is secured, GTT is aiming to establish sites across the country to provide commercial services. Georgetown-Timehri, Georgetown-Sheet Anchor (East Berbice), Georgetown-Parika, Essequibo (Supenaam-Charity), Linden and Bartica are among areas that are in line to benefit immediately from improved mobile data broadband services.

Blackburn said the establishment of the 4.5G LTE Network will account for a large percent of the company’s investment plans, which will total between 5 and 6 Billion Guyana Dollars.

Also, as part of its investment plans, GTT is also aiming to significantly increase the number of customers utilising Blaze –  a high speed internet service that delivers internet and telephone service over a 100% fibre optic network.

TT’s Chief Operating Officer (COO) – Home and Fixed Services, Eshwar Thakurdin, who also formed part of the interview, explained that GTT is working assiduously to provide more customers with Blaze. “Today we have about 75,000 homes, which have access to that fibre infrastructure,” Thakurdin said while noting that persons residing in Georgetown and Berbice are among the beneficiaries. By the end of 2021, GTT is aiming to connect another 10,000 customers to the fibre optic network as it encourages persons to transition from “copper to fibre.” Within the next two-three years, the communications giant is aiming to have more of its customers utilize Blaze. “We have to crunch some numbers and put some Maths behind it but we do have an aggressive target to do this over the next two-three years, and that is to roll out more fiber. And we have set an earmark this year for at least 10,000 more homes that would have access to fiber; we plan to do more of that in the next two to three years,” Thakurdin said.

Weighing in, Blackburn told Village Voice News that his experience with Blaze has been exceptional. “I’m using Blaze myself and so I know how good Blaze is. Blaze is the best home broadband I have ever used and I have lived in many, many countries. That includes the United States and the United Kingdom,” he told this publication.

However, the CEO admitted that glitches within the system periodically affect the quality of internet service provided. According to Blackburn, power outage is among contributing factors. He added too that Wi-Fi devices used by some customers pose difficulties, as such the company has been encouraging its customers to switch to its Wi-Fi mesh and Plume HomePass services. Unlike traditional routers, which broadcast from a single point, mesh network broadcasts the signal from multiple access points. Similarly, the Plume HomePass solution replicates the Wi-Fi signal.

That aside, the CEO said GTT is also working to improve its DSL Service as well as its Customer Services. He noted that upon taking office, it was found that there was a significant increase in number of persons querying services. “The amount of demand for calls has gone up because everybody is at home, more in their home environment because of COVID, so there has been a massive demand in volume. There have been problems over the last 12 months in getting through and I took immediate actions by recruiting 40 new customer care agents,” Blackburn said. He noted the 40 new customer care agents have been fully trained and are on the lines providing must needed support to customers.

“Our service levels have recovered massively [but] I wouldn’t call a victory yet until I see it sustained for several weeks but it is easier now,” he posited. According to him, the call waiting period has been significantly reduced.

Blackburn also spoke of the company’s plans in the coming years to expand its services to far flung communities but said this would require collaboration with both its competitors and regulators due to the current absence of infrastructure. He said power generation is a prerequisite.

“Bringing power to communities is a key enabler for us, because then we can bring our fiber,” he posited.

Blackburn added: “Have we got it 100 per cent everywhere, no. Will we continue to invest overtime? The answer is, yes.”

“…To get to allot of places in the end would require collaboration with the other operators and the regulator…We cannot solve things that are commercially uneconomic on our own, we would need structures put in place, which the government started to do, then we would play our full part. I’ve said that we will collaborate publicly; we will collaborate with our competitors where it makes sense to share, and we will participate in the government programme… We can’t solve all of them on our own but we will strive to keep investing money to make it happen.”

‘No power struggle in PNC’

Sun Jul 25 , 2021
Support Village Voice News With a Donation of Your Choice. …but activists say party must reform, repositioned   …change in leadership necessary    By Svetlana Marshall   Contending that there is no “power struggle” within the People’s National Congress Reform (PNCR), Political Activist, Lurlene Nestor said what Guyana is witnessing is an attempt to reposition the party to meet the changing political, social […]