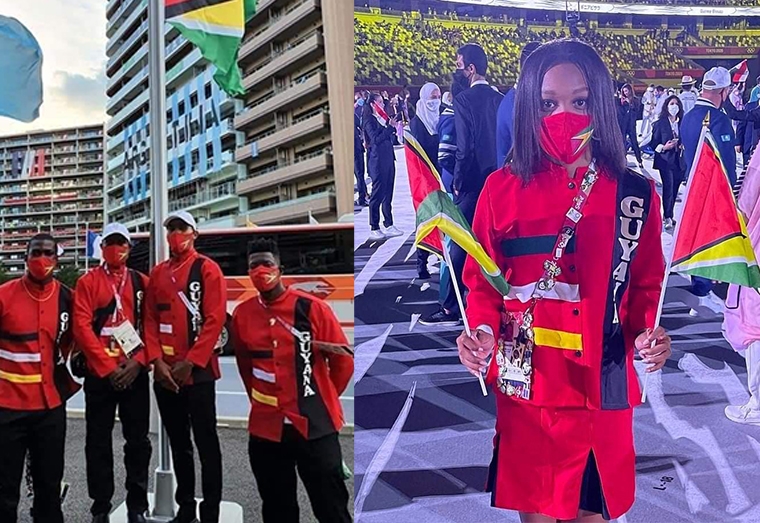 Guyanese have criticised the overpowering red on the official uniform of the country’s athletes at the Olympics and the government has distanced itself from the outfit, saying it was the work of the Guyana Olympics Association.

The summer games opened earlier on Friday with the honour falling on Tennis Star, Naomi Osaka to light the flame, the beacon of hope the Olympics attempts to be.

It marked the official opening of Tokyo 2020, a year later than planned, and in the midst of a global pandemic, the BBC reported.

Perhaps as expected, Friday’s opening ceremony was not of the usual ilk. No carnival like Rio, no skydiving monarchs like London, but a more sombre tone, a sobering reminder that this is a Games taking place in a world still facing its toughest challenge.

In Guyana citizens were livid with the team’s uniform, some laying the blame on the government for choosing the overpowering red, which is one of the dominant colours of the ruling PPP/C party. Others made the case for green to be the dominant colour as is the case with the Golden Arrowhead.

Below is the full statement by Minister of Sports, Charles Ramson jr

I have seen comments critical of the colours of the uniform of the Guyana Olympic team and spurious allegations directed towards the Ministry for attempting to politicize the uniform in party colours.

First, allow me to remind everyone that this is a time to celebrate the achievements of our young Guyanese who made it to the world stage to shine the spotlight on our beautiful country.

For those young Guyanese Olympians, this is the fulfilment of one of their lifelong dreams. Are we really going to allow our petty political allegiance to diminish their deserving moment of glorious achievement? Are we that selfish? We must not be and we must never be. There are times to fight and there are times to unite. Internally we may have our differences, but on the world stage we must always remember “We Are One Guyana”. Never forget that!

For the sake of clarity, however, the Ministry was not and was never involved with the design of the uniform which includes the choice of colours. This is strictly the domain of the Guyana Olympic Association and I am advised that all of our national colours were represented.

As everyone is aware, I have been critical for 5 years of the APNU-AFC’s attempt to brainwash Guyanese with their deliberate saturation of their green and yellow party colours which even callously made its way onto state institutions and buildings. It would, therefore, be hypocritical of me to do exactly as I criticized.
It is important to note too that the discontent now being expressed by some persons from the political arena were noticeably absent when “green and yellow” became the order of the day. It may very well be that this is the reason why this discussion may have taken place in the first place. Nonetheless, the public can be assured that the Ministry of Culture, Youth and Sport will never seek to direct that uniforms, state buildings or state paraphernalia be dominated by any political party colours.

Guyana and Guyanese, it is our time to shine – shine bright – shine as one!
#weareoneguyana