…Lindeners told on anniversary of police killing of protesters

As Lindeners and Guyanese by extension marked the 9th Anniversary of the death of three Lindeners who were killed during a 2012 protest, the Opposition has encouraged the people of the community to continue to defend their rights as provided for by the constitution.

On July 18, 2012 Ron Somerset, Shemroy Bouyea and Allan Lewis were shot and killed innocently at the Mackenzie/Wismar Bridge by ranks of the Guyana Police Force as they protested the PPP government’s then plan to increase the region’s electricity rates.

The Linden Martyrs Memorial activities began at the Bamia Cemetery on Sunday morning where regional officials and members of the Lewis, Bouyea, and Somerset families laid wreaths at the burial site of the three Linden martyrs.

At the emotional event the Lewis, Bouyea, and Somerset families expressed gratitude to the community of Linden for keeping the legacy of Ron Somerset, Shemroy Bouyea and Allan Lewis who were innocently killed, alive.

During the Linden Martyrs Memorial Ceremony Harmon stated that the Linden 2012 protest action is a marker in Guyana’s history that should inspire citizens to stand up and resist dictatorial leadership where ever it exists.

According to the Opposition Leader, the PPP government has disrespected the people of Region 10, particularly the people of Linden, for years. However, the disrespect had come to a halt when the APNU/AFC took office in 2015.

“What happened here to Bouyea, Sommerset and Lewis was the disrespect which the PPP had for the people of Region 10 and more particularly, Linden. And that disrespect continued until 2015 when we brought that period in the history of this country to an end,” Harmon noted.

He went on to say, “But certainly they have not learnt from this (Linden 2012 protest action) event because after August 2020 they have gone back to the same disrespect which they exhibited on July 18, 2012. It is that same level of disrespect they are trying to bring back to this community.”

Furthermore, Harmon noted that presently, the PPP government has been attempting to disregard negotiations made due to the Linden 2012 protest that benefited the mining town, as such, he encouraged the people to stand firm.

Also speaking at ceremony was PNCR executive, Aubrey Norton who reminisced on what led to the protest.

Norton said: “essentially Linden had a stable electricity system and what happened years ago under the PPP government was that they sold that piece of machinery that give cheap electricity and it was replaced with a costlier version.”

“Having done that, they proceeded to attempt to remove the subsidy from electricity in Linden without putting in place the mechanisms for people to earn and for people to live a better life. The consequence of that was the protest that occurred at the time,” he added.

Norton said that residents of Region 10 must see that their past struggles are part of their present struggles which is the fight for a better life, one without being marginalised.

Meanwhile, Former Regional Chairman of Region 10, Sharma Solomon emphasised that while many people believed that the 2012 protest action was fundamentally about electricity, the root cause was really persons defending their rights to be part of the decision making process for their community.

According to Solomon, the rights defended by the people are embedded in Article 13 of the Constitution and is backed by Philosopher John Locke.

“The struggle is rooted in Article 13 of the Constitution. There is a particular part of Article 13 that asks that specific reference be made to those decisions that impact the lives of citizens, that is fundamentally what that social policy of acknowledgement of our struggle was about…And according to John Locke Philosopher, the people have a right and entitlement if the state or government does not act on their behalf to not only challenge that government but if possible, remove that government,” he noted.

In reminiscing on the protest action that lasted for over 30 days in the Linden community, Solomon recalled what took place on July 18, 2021.

He noted, “Instead of responding appropriately to the people and their concerns, what you had was a government prepared to violate those structures and to hijack one of the most fundamental structures that represents the coercive arm of the state and that is the Police Force.”

“So instead of meeting with citizens a government unleashed terror on this community. You had five snipers across the river, this was the response to people who were practicing their fundamental right that is positioned in the Constitution of Article 13,” Solomon added.

The Former Regional Chairman stated that the people of Linden and the three Linden Martyrs are who bred life into Article 13 of the Constitution by choosing to stand up and oppose burdens that the government wanted to impose on them.

The protest action lasted for over 30 days, and ended when an agreement which was signed on August 21, 2012 between the Region 10 Regional Democratic Council and Central Government.

Mon Jul 19 , 2021
Support Village Voice News With a Donation of Your Choice. A motor cyclist is dead following a collision with a vehicle driven by a Ministry of Finance official Sunday afternoon on the West Coast Berbice. Dead is 20-year-old Nathaniel Ledra,  teacher of the Black Bush Polder Secondary School and of and of Lot 195 Mibicuri North Black Bush Polder Corentyne, […] 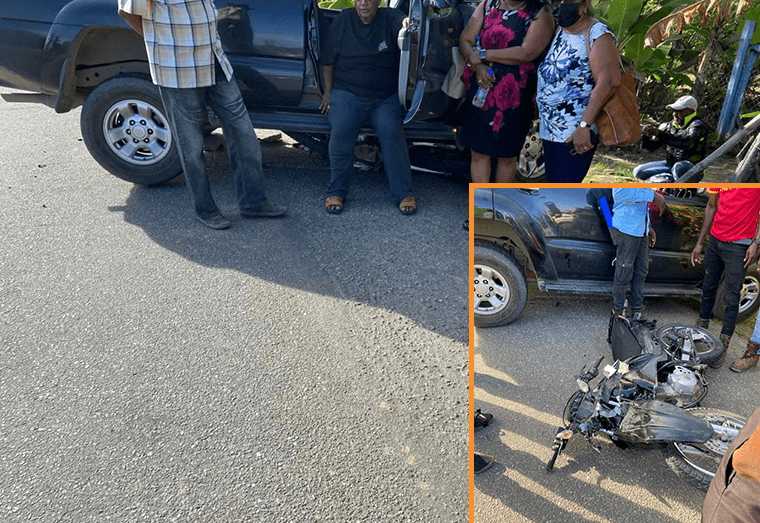