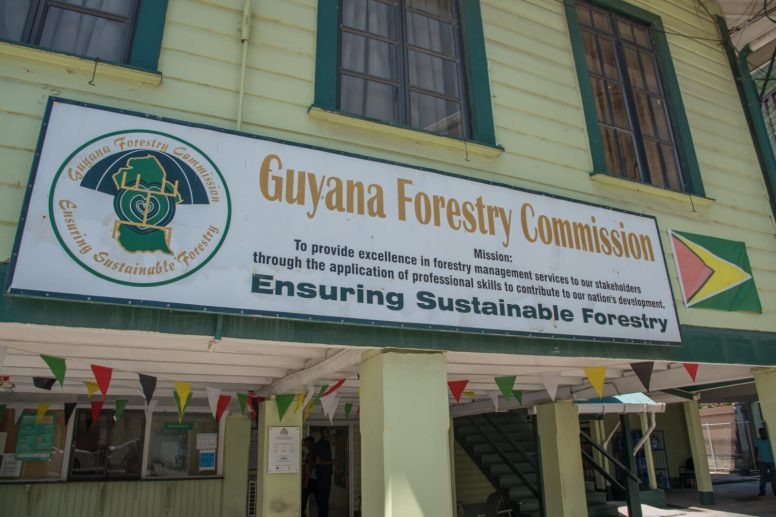 The fired workers of the Guyana Forestry Commission are to receive their full benefits from the commission following representation by the Guyana Agricultural and General Workers Union (GAWU), which was inspired by the Guyana Trades Union Congress.

In a press release GAWU said the employees of the Guyana Forestry Commission (GFC) who were terminated on June 30, 2021, are to uplift from the Commission payments representing their terminal benefits, notice pay, annual leave entitlements, leave passage allowance and travelling allowance. “Our union having learnt of the workers matter, invited them to meet with the GAWU. Following an extensive engagement where the workers related what transpired and the Union offered its advice and suggestions, the workers decided they wished to receive their outstanding benefits. As a result, the GAWU wrote the Commission by letter of July 07, 2021, demanding the workers’ rights be respected and that they receive all benefits due to them. The GFC agreed with the GAWU representation and thereafter shared the computations with the Union. Following receipt of the calculations, the GAWU engaged the workers to examine collectively their respective computations. An omission was recognised, and this was drawn to the Commission’s attention which it undertook to correcting the calculation. Having cleared the obstacles, the Commission has prepared the workers payments for them to uplift,” GAWU said.

The GTUC had written GAWU on July 6, 2021 highlighting the plight of the workers and urged that the union intervene. The GAWU then responded in a letter the next day, advising GTUC that the three workers were not members of the GAWU, but agreed to make representation for them. “The workers have expressed their sincere appreciation to the GAWU as they have recognised the importance of the union in protecting their rights at the workplace. They believed was it not for the involvement of the GAWU they may have faced greater difficulty considering they were not sure of their rights,” GAWU said in its release. “Our Union, for its part, is heartened that the workers’ rights were upheld and the matter was resolved amicably and within a short period.

The workers who were fired are: Dexter Benjamin (mechanic), Ronald Parris (maintenance clerk), Clive Harris (driver) and Roger Manawar Khan (driver)along with a female contracted employee.
The four men, three of whom told staff members that they won’t be returning to GFC even if they are offered re-employment, are seeking additional benefits to the one month’s pay mentioned in their letters of termination. The Village Voice News was told that the men are entitled to terminal benefits for years of service, payments for outstanding annual leave, leave passage and travelling allowance. They are also owed monies from the company’s pension scheme. Many public officials have noted that the men should consider legal action against the body but this newspaper was informed that the men are awaiting the GFC’s position on their due payments before making their next move.
Citizens reacted in dismay last week when news broke of the termination of the men’s services from the GFC. A contracted female employee who retired from the GFC and was rehired, was also fired.

The quintet believes that they were fired after they were accused by the GFC’s management of failing to acknowledge the presence of a minister during a lunch-hour visit while they played a game of dominoes two Mondays ago. Reports are that the four men and the female radio operator, all of whom served the GFC for various years ranging from 10 to 25 years, were fired by the personnel department since the they were seen playing dominoes when Minister of Natural Resources, Vickram Bharrat visited the company’s offices at Water Street, Kingston.
A staff member told the Village Voice News that the staff members were shocked by the decision of the GFC. One of the men told his colleagues that he was told to visit the personnel department to uplift a letter and to his surprise, the letter spoke to the termination of his services with no reason given. Three of the men’s letters mention no reason for termination while another was told that he was being fired because a vehicle has not been functioning properly since he was responsible for fixing same.
On receipt of his termination letter, one of the men reportedly engaged the Human Resource personnel on the issue but according to him, the woman informed that he can go to “whoever” he wishes in a dismissive tone. His colleagues told the Village Voice News that the official was most unhelpful to his cause and she usually dismisses workers’ pleas whenever they engage her office.
One of the drivers who was fired was said to be a former driver of Minister Bharrat and according to a GFC source, there may be more to his termination. They said it may have been tied to his decision to request a transfer back to the GFC from the ministry. Reports are that the man was appointed the personal driver of the minister last September but since the job saw him having little time for his family, he requested to be relocated to the GFC since his name is on that body’s payroll. He served the GFC for more than nine years. The man was relocated to the GFC one week before he was fired.
Toxic environment
A GFC official told this newspaper that the atmosphere at the GFC’s Kingston office is nothing but toxic, noting that more than 90% of the staff are merely working because they have a family or bills to pay. He said he cannot recall the last time the GFC had a general staff meeting, noting that this breakdown in communication may have contributed to the recent firings. “GFC was like a family, right now is dog eat dog, “he added.
On the day of the incident, the quintet was playing dominoes around 12:20 as they ate their lunch. The minister walked by and acknowledged the men and they noted that they stood up as he passed. “I don’t see the big deal because the minister clearly said it was okay and since it was their lunch hour we ain’t see the big deal,” a staff member noted.
Dominoes tradition
Reports are that later that day rumours circulated that the management of the body was not happy with the manner in which the five conducted themselves when the minister passed through. But GFC staff told the Village Voice News that playing dominoes is a lunch-hour tradition at the body’s office. He said the team from Kingston is one of the better ones within the public service circuit and when competitions are held, it is usually a winner. “Even a PS {Permanent Secretary} join in the games when we play here at lunch time, I ain’t see the big deal,” the man added.

Reports are that the GFC has been plagued by financial problems for several months, and one staff member noted that things are so bad at the GFC in recent months that some persons received their salaries late since the body was paying in an alphabetical order. It was noted too that field staff who receive their salaries late would sometimes suffer a double blow since monies which were not yet cleared for trips are usually deducted.
For those receiving bank payments, the smaller number of staff paid through particular banks were paid before the larger number of staff paid through other commercial banks. The GFC has made attempts to remedy the situation but by the looks of things, the staff members believe that persons may be eventually laid off. The GFC is responsible for advising the subject Minister on issues relating to forest policy, forestry laws and regulations. The Commission is also responsible for the administration and management of all State Forest land; the work of the Commission is guided by a National Forest Plan that has been developed to address the forest policy.

Fri Jul 16 , 2021
Support Village Voice News With a Donation of Your Choice. The Guyana Public Service Union (GPSU) has written the chairman of the Trade Union Recognition Board, Dr Nanda Gopaul complaining about government’s reluctance to pay salary increases to public servants. “In keeping with Clause 6 of the legally binding Agreement for the Avoidance and Settlement of Disputes between the Government […]