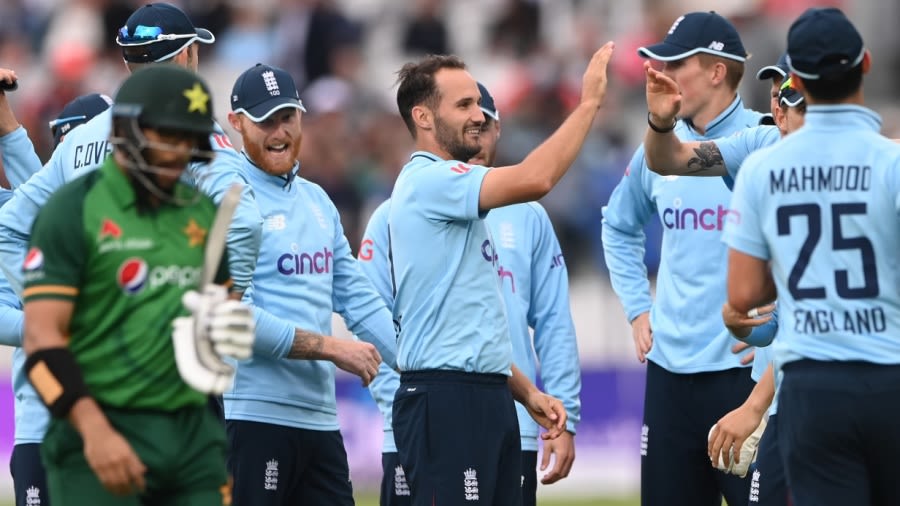 (BBC SPORT) England pulled off another impressive victory over Pakistan by 52 runs in the second one-day international at Lord’s to clinch the three-match series with a game to spare.

After rain reduced the contest to 47 overs per side, England recovered from 160-7 to 247 all out in 45.2 overs – the hosts unchanged from an XI that included five debutants in the first ODI after a Covid-19 outbreak.

They then grabbed the initiative of an entertaining game by reducing Pakistan to 86-5 with a fine new-ball spell.

Fast bowler Saqib Mahmood stood out again, dismissing captain Babar Azam lbw for 19 and Mohammad Rizwan caught behind for five, while Lewis Gregory removed opener Imam-ul-Haq with his first ball – the seventh delivery of the innings.

Saud Shakeel kept the tourists in the game with 56 from 77 balls, while Hassan Ali took 22 runs from one Matt Parkinson over to energise the vocal Pakistan supporters.

But Shakeel holed out to deep square-leg off Parkinson and Gregory claimed the final wicket in the following over, Pakistan dismissed for 195 with 36 balls remaining.

All-rounder Gregory, who took 3-44, earlier scored 40 in a crucial eighth-wicket stand of 69 with Brydon Carse.

England had lost 5-42, seamer Hassan ripping through the middle order en route to figures of 5-51, after opener Phil Salt hit an aggressive 60 from 54 balls and James Vince scored 56 from 52. It resulted in another impressive win for this inexperienced England side, who lead the series 2-0 going into the final match in Edgbaston on Tuesday. This was also the first cricket match in England to be allowed a capacity crowd since the start of the pandemic, although the attendance was 22,704 – around 75% full.

This England success was almost as impressive as the nine-wicket win in Cardiff, given it was a more all-round performance and at times they were put under significant pressure.

Put into bat in damp conditions, Dawid Malan nicked to slip and Zak Crawley was brilliantly bowled by a Shaheen Afridi yorker, both for ducks, but Salt and Vince counter-attacked with a stand of 97 from 80 balls.

Salt and Vince were bowled by the spin of Shakeel and Shadab Khan respectively, and when captain Ben Stokes had his off stump removed by Hassan for 22, before John Simpson and Craig Overton quickly followed, England were in serious trouble.

But they responded again. Carse and Gregory had relatively quiet debuts in Cardiff but the pair showed maturity in rotating the strike while still scoring at a decent rate and punishing the bad balls.

Without their stand – the highest for the eighth wicket in an ODI at Lord’s – England would likely have been well short.

Their influence continued in the second innings when Gregory took the first wicket – Imam caught by wicketkeeper Simpson – and the last – Haris Rauf taken down the leg side.

Carse ended Hassan’s onslaught of 31 from 17 balls by having him caught at fine leg for his first international wicket and Simpson, another in his second ODI, caught the eye with a brilliant take off Parkinson.

He anticipated a sweep from Faheem Ashraf and caught the left-hander off the face of the bat down the leg side.

The fact the result was not completely certain even with Pakistan nine down showed England’s total was not insurmountable.

Instead the loss of early wickets cost Pakistan again, as it did in Cardiff.

Babar, the number one ranked ODI batter in the world, showed a flash of his brilliance in hitting three boundaries in one over including a perfect on-drive, but he was removed by a good ball from Mahmood, which nipped in and would have hit the top of middle.

In contrast, opener Fakhar Zaman made a tortured 10 from 45 balls before being bowled by Overton.

Pakistan’s bowling was improved, with Hassan the standout performer, though Rauf and Ashraf allowed Salt and Vince too many loose balls.

‘The performance was fantastic’ – what they said

England captain Ben Stokes: “The really pleasing thing about that is the inexperienced players coming in and still continuing that mindset that we’ve produced over the last four or five years.

“The performance was fantastic.”

Pakistan captain Babar Azam: “We didn’t utilise the first 10 overs, we didn’t get a partnership to score a good total and lost early wickets. “Hassan Ali was outstanding and Saud Shakeel showed his potential.” Former England bowler Steven Finn on Test Match Special: “England were just impressive all round. The important thing is Pakistan put England under more pressure and it was a test to see if this inexperienced side could get through it. “They came through every one of those passages of play where they could have folded.”