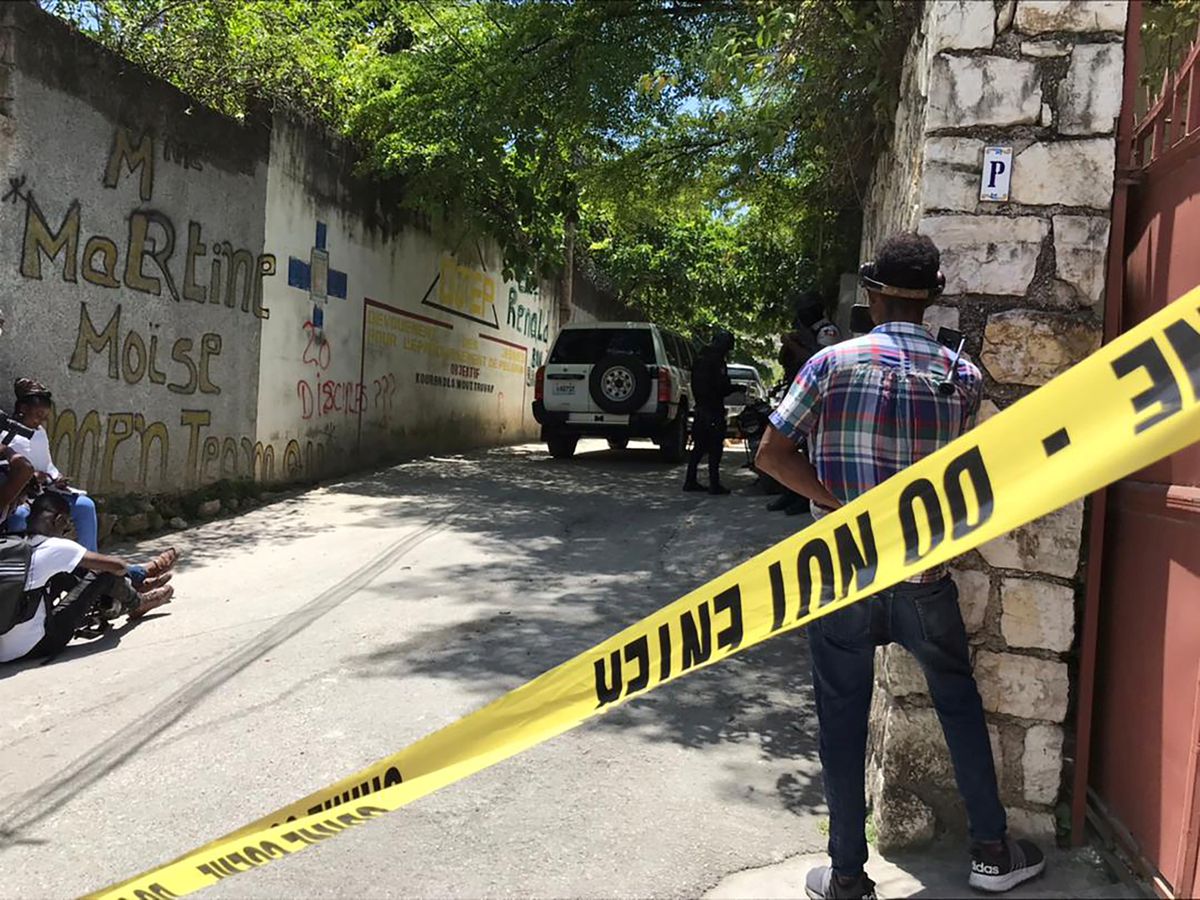 PORT-AU-PRINCE, July 8 (Reuters) – A heavily armed commando unit that assassinated Haitian President Jovenel Moise was composed of 26 Colombians and two Haitian Americans, authorities said on Thursday, as the hunt went on for the masterminds of the killing.

Moise, 53, was fatally shot early on Wednesday at his home by what officials said was a group of foreign, trained killers, pitching the poorest country in the Americas deeper into turmoil amid political divisions, hunger and widespread gang violence.

Authorities tracked the suspected assassins on Wednesday to a house near the scene of the crime in Petionville, a northern, hillside suburb of the capital, Port-au-Prince. A firefight lasted late into the night and authorities detained a number of suspects on Thursday.

Police Chief Charles Leon paraded 17 men before journalists at a news conference late on Thursday, showing a number of Colombian passports, plus assault rifles, machetes, walkie-talkies and materials including bolt cutters and hammers.

“Foreigners came to our country to kill the president,” Charles said. “There were … 26 Colombians, identified by their passports … and two Haitian Americans as well.”

He said 15 Colombians were captured, as well as two Haitian Americans. Three of the assailants were killed and eight remained on the run, Charles said.

Colombian Defense Minister Diego Molano said in a statement that preliminary information indicated that Colombians involved in the attack were retired members of the country’s military. He said Bogota would cooperate in the investigation.

A State Department spokesman could not confirm if any U.S. citizens were among those detained, but U.S. authorities were in regular contact with Haitian officials, including investigative authorities, to discuss how the United States could provide assistance.

Officials in the mostly French- and Creole-speaking Caribbean nation had said on Wednesday the assassins appeared to have spoken in English and Spanish.

“It was a full, well-equipped commando, with more than six cars and a lot of equipment,” Pierre said.

Officials have not yet given a motive for the killing. Since taking office in 2017, Moise had faced mass protests against his rule – first over corruption allegations and his management of the economy, then over his increasing grip on power.

An angry crowd gathered on Thursday morning to watch the police operation unfold, with some setting fire to the suspects’ cars and to the house where they had hunkered down. Bullets were strewn in the street.

“Burn them!” shouted some of the hundreds of people outside the police station where the suspects were being held.

Charles said the local population had helped police track down the suspects, but he implored residents in the sprawling seafront city of 1 million people not to take justice into their own hands.

A 15-day state of emergency was declared on Wednesday to help authorities apprehend the killers. But interim Prime Minister Claude Joseph said on Thursday it was time for the economy to reopen and that he had given instructions for the airport to restart operations.

Moise’s death has generated confusion about who is the legitimate leader of the country of 11 million people, which shares the island of Hispaniola with the Dominican Republic.

Haiti has struggled to achieve stability since the fall of the Duvalier family dictatorship in 1986, grappling with a series of coups and foreign interventions.

A U.N. peacekeeping mission – meant to restore order after a rebellion toppled then-President Jean-Bertrand Aristide in 2004 – ended in 2019 with the country still in disarray.

“I can picture a scenario under which there are issues regarding to whom the armed forces and national police are loyal, in the case there are rival claims to being placeholder president of the country,” said Ryan Berg, an analyst with the Center for Strategic & International Studies.

Haiti’s 1987 constitution stipulates the head of the Supreme Court should take over. But amendments that are not unanimously recognized state that it be the prime minister, or, in the last year of a president’s mandate – the case with Moise – that parliament should elect a president.

The head of the Supreme Court died last month due to COVID-19 amid a surge in infections in one of the few countries yet to start a vaccination campaign.

There is no sitting parliament as legislative elections scheduled for late 2019 were postponed amid political unrest.

Moise just this week appointed a new prime minister, Ariel Henry, to take over from Joseph, although he had yet to be sworn in when the president was killed.

Joseph appeared on Wednesday to take charge of the situation, running the government response to the assassination, appealing to Washington for support and declaring a state of emergency.

Henry – considered more favorably by the opposition – told Haitian newspaper Le Nouvelliste that he did not consider Joseph the legitimate prime minister and he should revert to the role of foreign minister.

“I think we need to speak. Claude was supposed to stay in the government I was going to have,” Henry was quoted as saying.

The United Nations Special Envoy for Haiti said on Thursday Joseph would remain leader until an election was held, urging all parties to set aside their differences.

Moise, backed by the international community, had been pushing to hold both elections and a constitutional referendum in September, efforts that were vehemently opposed by Haitian civil society, which had called first for a transitional government to guide the country to a vote.

Pierre told Reuters the Cabinet intended to guide the country to elections in two months’ time as planned.

“There are many unknowns about what happens next,” said Jake Johnston, a senior research associate at the Center for Economic and Policy Research in Washington. “But it is important to remember that that was also the case before the assassination of Moise.”

Fri Jul 9 , 2021
Support Village Voice News With a Donation of Your Choice. Randolph Mc Adams, 43 years of no fixed place of abode was on Thursday assaulted by a group of men while protesting the non-payment of his salary by his employer. Police said a suspect identified as Oscar and other members of the gang  are at large. According to a police […]