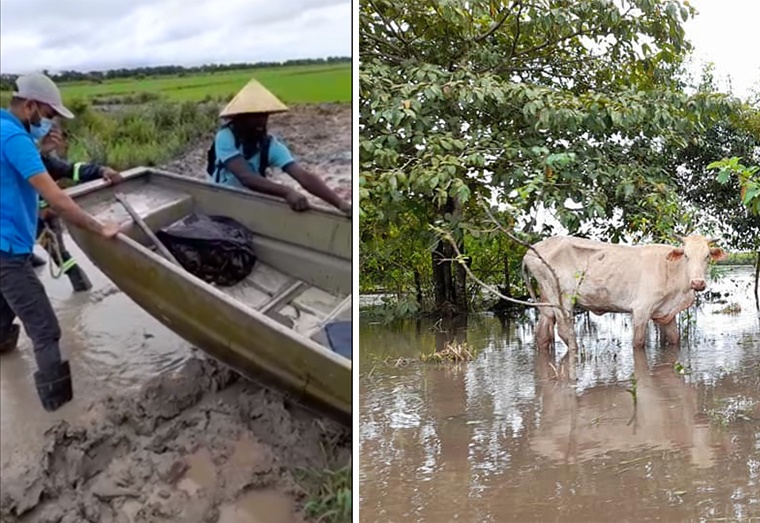 Guyana’s agriculture sector has likely faced billions in losses as a result of the ongoing widespread flooding with livestock farmers taking a big hit and many now concerned about recovery.

In fact, Chief Executive Officer (CEO) of the Guyana Livestock Development Authority (GLDA), Dr. Grayson Halley has confirmed that a significant number of animals have perished because of the floodwaters, which has already begun to cause a ripple effect by influencing the cost of some meats on the local market.

“This is really a disaster as pronounced by the President and it’s reflected in the livestock sector,” Dr. Halley said. He noted that small and large ruminants have been most affected by the flooding. This includes sheep, goats, and cattle which depend on the pastures now flooded. Although water may recede from pastures, it leaves behind the issue of mud which causes farmers to have to wait on the regrowth of grass.

“It’s very significant, especially in the Abary area, along the Canje Creek and at Kokorite Savannah. They are mainly cattle and very heavily affected, a lot of mortalities. We will not know the full extent until the water pulls off and then we get to see the actual picture, but the numbers, so far, from what we have observed and the reports coming in, it’s very high. Farmers are growing very frustrated because they cannot get the animals or the water isn’t going off,” Dr. Halley said.

With water on their lands, some livestock farmers have no proper access to grass while animals unable to withstand the floodwaters, drown or die from illnesses or disease.

In general, as it relates to livestock, the areas most affected are riverine locations. These include Mahaica Creek, Mahaicony Creek, Abary Creek, Canje Creek, and Upper Berbice River, Kwakwani. Noteworthy also are areas in Region Nine and Linden.

A GROWING DEMAND FOR FEED

Dr. Halley explained the GLDA is doing its best to save as many animals as it can by providing health care or treatment and feed — especially to those most affected.

The feed provided is a mixture of grass, molasses, bran, and minerals which are produced at the Skeldon Estate. “Grass is something that is very scarce now in these affected areas. So, luckily we have this grass at Skeldon that we are going to use for the Skeldon Cogeneration Plant to generate electricity but now we are putting it to use to help the animals,” Dr. Halley said.

The feed and treatment provided to affected livestock farmers are free of cost. However, the demand for feed is greater than the plant can supply. Farmers have been persistently calling in hopes to receive the resources. To procure another machine would currently prove too costly but plans for such have been noted for the next budgetary year.

Meanwhile, as an alternative to ensure animal safety and health, efforts are being made to relocate animals to higher ground.

With the help of farmers, GLDA is using trucks to transport the animals and boats in other areas — the latter poses great difficulty in floodwaters with obstacles.

“So far, we located a lot of them but there is still a big portion that we cannot get, especially in Abary Creek and Cocorite Savannah which is along the Canje Creek. There are a lot of wild animals so it’s very difficult to get them. They keep running deeper into the water but we’re trying to get them in small portions,” the CEO said.

As a result of the experience, the GLDA plans to build high dams in the future so that should such a flood occur again, more farmers will have access to higher ground.

There is a fear that the cattle industry or livestock industry could collapse if conditions worsen. Dr. Halley explained that while the crops sector is also affected, crop farmers can recuperate faster relative to the time it takes to grow new crops. However, with livestock, farmers must wait for the animal to mature in age and multiply.

In other words, it will take years for livestock farmers to replace the animals lost during this period. Poultry is also affected but these are short cycle animals. “I would say billions in losses because we’re talking about all species and if you add crops to it also and rice, it’s a lot. Billions in losses for the agriculture sector,” the CEO estimated.

He said that some crop farmers — many of whom are also livestock farmers — are facing significant losses due to damaged rice paddy which will no longer germinate.

Along with the price for some crops going up on the local market, Dr. Halley said that citizens can expect the same for ruminant meat if they aren’t experiencing this already. “It’s a domino effect, it has a ripple effect…now that beef price is going up you’ll find that all other meats, the price is going to go up and it will generally have an effect on cost of living,” he said.

“Also, a lot of the vegetables got damaged, so, the little that remains, people are going to carry up the price on that.”

Farmers visited by the GLDA — often in conjunction with the National Agricultural Research and Extension Institute (NAREI) — have expressed their gratitude for the assistance.

The GLDA has increased its staff complement in Regions Five and Six. It encourages all livestock farmers to relocate their animals as best as possible and reach out for assistance with transportation and workmanship to catch animals. They are also encouraged to be proactive in preparation for the next rainy season by adopting climate-smart agriculture practices such as building higher pens.

No decision on who will act for Lowenfield, Myers

Mon Jun 28 , 2021
Support Village Voice News With a Donation of Your Choice. ….Alexander sounds warning of GECOM machinery grinding to a halt  By Svetlana MarshallCome Monday (June 28), both the Chief Elections Officer (CEO) Keith Lowenfield and the Deputy Chief Elections Officer (DCEO), Roxanne Myers will proceed on their annual leave as instructed by the Guyana Elections Commission (GECOM) but their replacements […]