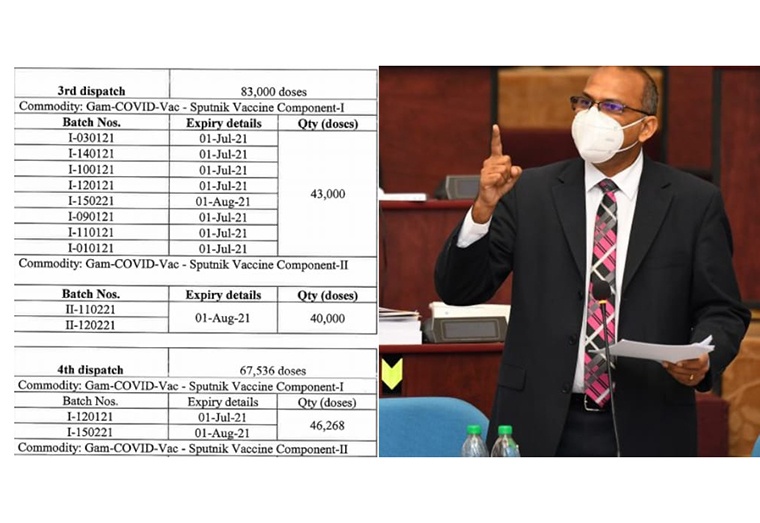 The Ministry of Health has made public a letter from Director-General of the Russian Direct Investment Fund (RDIF), Alexander Christyakov in which the official has confirmed the authenticity of the shipment of 305,536 doses of Sputnik-V vaccines to Guyana.

In the letter received on Tuesday, June 22, 2021,  Christyakov outlined the batch number for the vaccines that were shipped in five dispatches. There were 244, 268 of the first dose and 61,268 of the second. The document included the batch number, expiry date of the vaccines, and the quantity of doses. Some vaccines will expire on July 1, August 1, and October 31, 2021.

The Official also noted that all supporting documentation inclusive of batch release, certificate of analysis and packing list have been provided along with the shipments.

In a supporting release, the Ministry of Health called on Opposition Leader, Joseph Harmon to publicly withdraw his statements regarding the authenticity of the vaccines. Harmon had questioned such when it was revealed recently by Health Minister, Dr. Frank Anthony, that the Sputnik-V vaccines procured for Guyana were not procured directly from the Government of Russia, but through a middleman whom he identified as the Sheik Ahmed Dalmook Al Maktoum.

The Ministry stated: “We call upon Mr Harmon to publicly withdraw his reckless and irresponsible statements, and to issue a public apology to the Guyanese people for the irreparable harm that he has done to national vaccination program, the distrust that he has created and the vaccine hesitancy that he caused which has indirectly put at risk the lives of many Guyanese. We also call on him to make a forthright statement in support of the vaccination program and to stop playing cheap politics.”

Wed Jun 23 , 2021
Support Village Voice News With a Donation of Your Choice. A Stabroek Square vendor was on Tuesday afternoon stabbed to death during a row over the placement of a stall. Dead is Robert Bizzette called ‘Brick’ aged 35 a vendor of Cane View South Ruimveldt. Police said the suspect is a 46-year-old male who has been arrested and in custody. […]