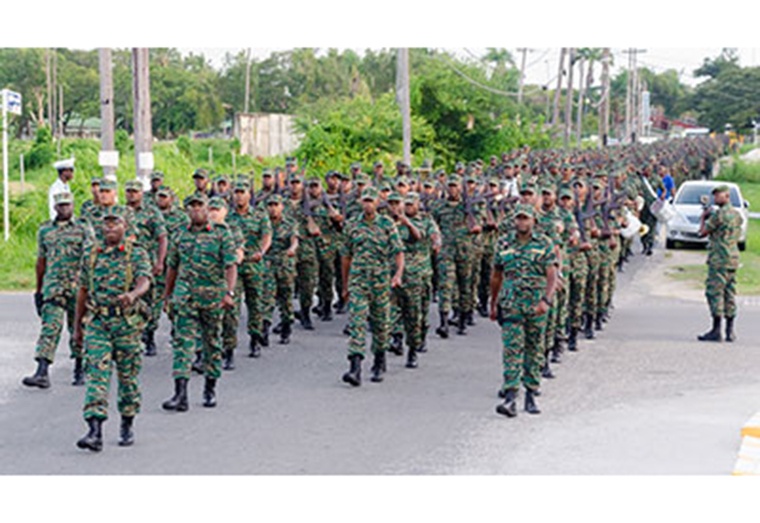 Unvaccinated warrant officers and senior non-commissioned officers of the Guyana Defence Force have been summoned to a meeting Monday morning with the Chief-of-staff.

A well placed source at the GDF told the Village Voice News that the military continues to subtly pressure soldiers to take the vaccines.

“We have all been summoned to this meeting in the auditorium…we don’t know what will be our fates,” the soldier who spoke to this newspaper said.
He said everyone was asked to dress in their uniform including their sashes and other decorations. The soldier said there is growing concern about what appears to be coercion to take the vaccines. “They are not putting it in force order. They are trying to do things underhand and  unconstitutional,” the soldier said.

The GDF came under fire recently when it issued a memo stating that its members who refuse to get vaccinated against COVID-19 will be sanctioned.

COVID-19 vaccination is not mandatory in Guyana, but the  memo then had stated that all members of the GDF who are refusing the vaccines will be interviewed and told of “disincentives that will follow and possible sanctioning by the Force.”

Covid deaths and infections continue to rise in this country. As of Sunday there were 447 deaths here and some 19096 infections since this country recorded its first case back in March last year.

The authorities have been banking on ongoing vaccination campaign as part of its fight to combat the disease. A recent news publication by a Norwegian news network has cast a dark light over the government’s procurement process of the Russian Sputnik vaccine.

Mon Jun 21 , 2021
Support Village Voice News With a Donation of Your Choice. — cite threats to Guyana from Exxon’s operations in LIZA 1  More than 30 Guyanese stakeholders have written to Exxon shareholders demanding an updated risk assessment following the use of faulty equipment in Liza 1 and warning that a well blowout could be economically and environmentally catastrophic – with a […]