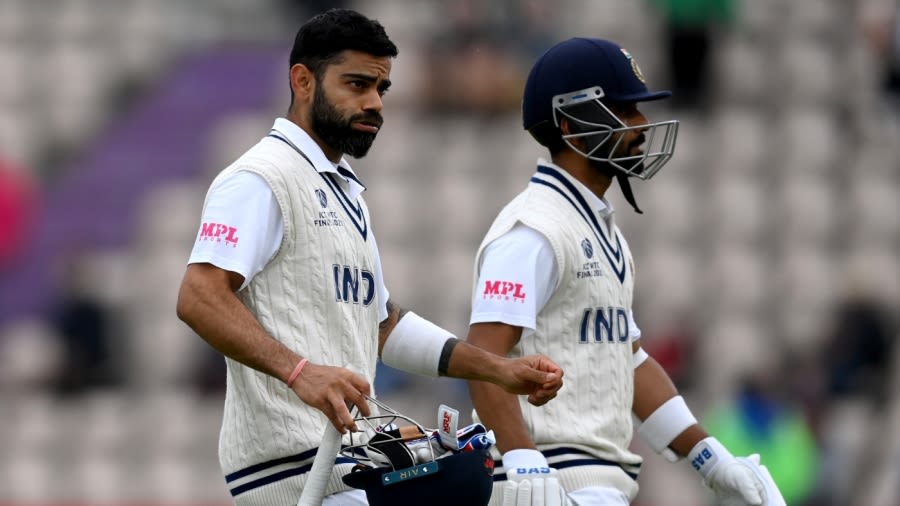 (CRICINFO) We have only had a little over two sessions’ worth of cricket on the first two days of the World Test Championship final, but what we’ve had has been high-quality cricket worthy of the occasion.

When bad light curtailed the second day to just 64.4 overs after the first day was washed out, India, asked to bat in challenging conditions against a deep attack, were 146 for 3 and, you’d suspect, the happier side.

New Zealand will be disappointed but not despondent: it could have been worse after a 62-run opening stand between Rohit Sharma and Shubman Gill as Tim Southee and Trent Boult got off to an uncharacteristically indifferent start. Towards the end of the day, Virat Kohli and Ajinkya Rahane looked sublime in fading light, playing the ball delightfully late and biding their time as New Zealand didn’t offer easy scoring opportunities. No batting duo now has more fifty-run stands for the fourth wicket or lower.

It was one of those “good toss to lose” days, but it turned out both sides would have liked to have had a bowl after the pitch had been under covers for two days and with the sun unlikely to make an appearance. The coin fell Kane Williamson’s way, but his opening bowlers didn’t get his side off to a desired start.

Part of it was possibly down to proactive Indian openers. By repeatedly walking down the pitch to meet the ball before it had swung, they made a statement to Southee and Boult. When they tried to bang it in short – which was not often – Gill pulled with disdain.

New Zealand are the most economical attack in this WTC cycle. They keep the runs down and then let the subtle skills of their bowlers take. Here, though, both Southee and Boult went searching too often with the new ball. Did the batsmen upset their rhythm? Did they feel the pressure of expectation when your captain hands you the ball in such conditions? It is anybody’s guess, but Rohit and Gill punished them every time they pitched too short or too full, which was often. By the time Williamson brought on his first-change bowler, Kyle Jamieson, India had 37 on the board in 10 overs.

The first maiden of the innings was the 12th, bowled by Boult; then Jamieson and Colin de Grandhomme added one each on top of it. Not long after, Jamieson drew the first fatal error from India. Rohit pushed away from the body for the first time in his innings, edging the outswinger, but not before giving India their first 60-plus opening stand in England in over a decade. There might have been the mildest of question marks against Neil Wagner’s inclusion in the final XI because in early summer conditions in England you hardly need his trademark method of hustling batters with short-pitched bowling. However, within three balls of his introduction into the attack, Wagner vindicated his selection. He swung the first ball back into Gill and then, from the exact same length, the third ball held its line. Gill had to play at it because of the earlier swing, and BJ Watling – playing the final match of a stellar career – pouched a catch behind the wicket. India had now lost two wickets for one run.

A fascinating spell of play followed either side of lunch. Cheteshwar Pujara went about his usual business, taking 36 balls to get off the mark and then showing intent to upper-cut Wagner. At the other end, Kohli, who has mastered the quickest and the scariest of bowlers, had to swallow his ego and play maiden after maiden from de Grandhomme’s dibbly-dobblies. de Grandhomme bowled with just the right (lack of) pace and amount of movement to nag Kohli, who had previously faced 10 balls from him in Test cricket for one run and one lbw dismissal. Here, too, de Grandhomme seemingly tried to set up the same, bowling outswingers from middle and off.

Once he nearly took the edge, but that ball that shapes up to swing one way and then seams the other didn’t arrive. Kohli faced 21 balls from de Grandhomme for just four runs, but didn’t once try to hit out. Pujara saw out Jamieson, then made Wagner switch to bouncers, one of which got him in the head as he looked to hook, which he rarely does, but just ask Australia what usually happens when Pujara battles through a tough phase. With a five-man attack, though, New Zealand kept coming back at him. The next test was Boult, who had got Pujara out four times for 48 runs outside India. Today, the first he bowled to Pujara was right on the money: swinging in for the lbw, Pujara seemed to have covered the swing, but it seamed some more after pitching, beating his inside edge and trapping him in front.

Rahane can be a flashy starter, but he got a gift down the leg side first ball, which he clipped away. A general indicator of where Rahane’s form is how late he plays the ball early in his innings. He was in no hurry here. Except for a near run-out early in the piece, there was nothing flashy from him. The player of the day, though, was at the other end. On that calendar it might have been over 18 months since Kohli has scored an international hundred, but he has batted as well as anyone in this period. It was on display here again. Except for a mini phase in the stop-start final session when he began to push at Southee outswingers, Kohli looked in control against everyone.

New Zealand’s response was to block his scoring areas. The cover drive and the flick through midwicket were well guarded. So Kohli had to wait for the errors in length. He did. But even when they erred, they fed possibly the only shot that Kohli doesn’t relish: the cut. However, Kohli kept scoring through point with pushes and punches. The conditions demanded for nothing short of Kohli’s best: even the 60-over-old ball swung under the clouds. Close to eight hours have already been lost in the Test, but they can be made up with an extra half hour added to the remaining days and a whole reserve day in the bank. Any further interruptions will start eating into the Test, which, going by the quality of the contest in the limited time we have had, will be a massive shame.

West Indies Bundled out for 149