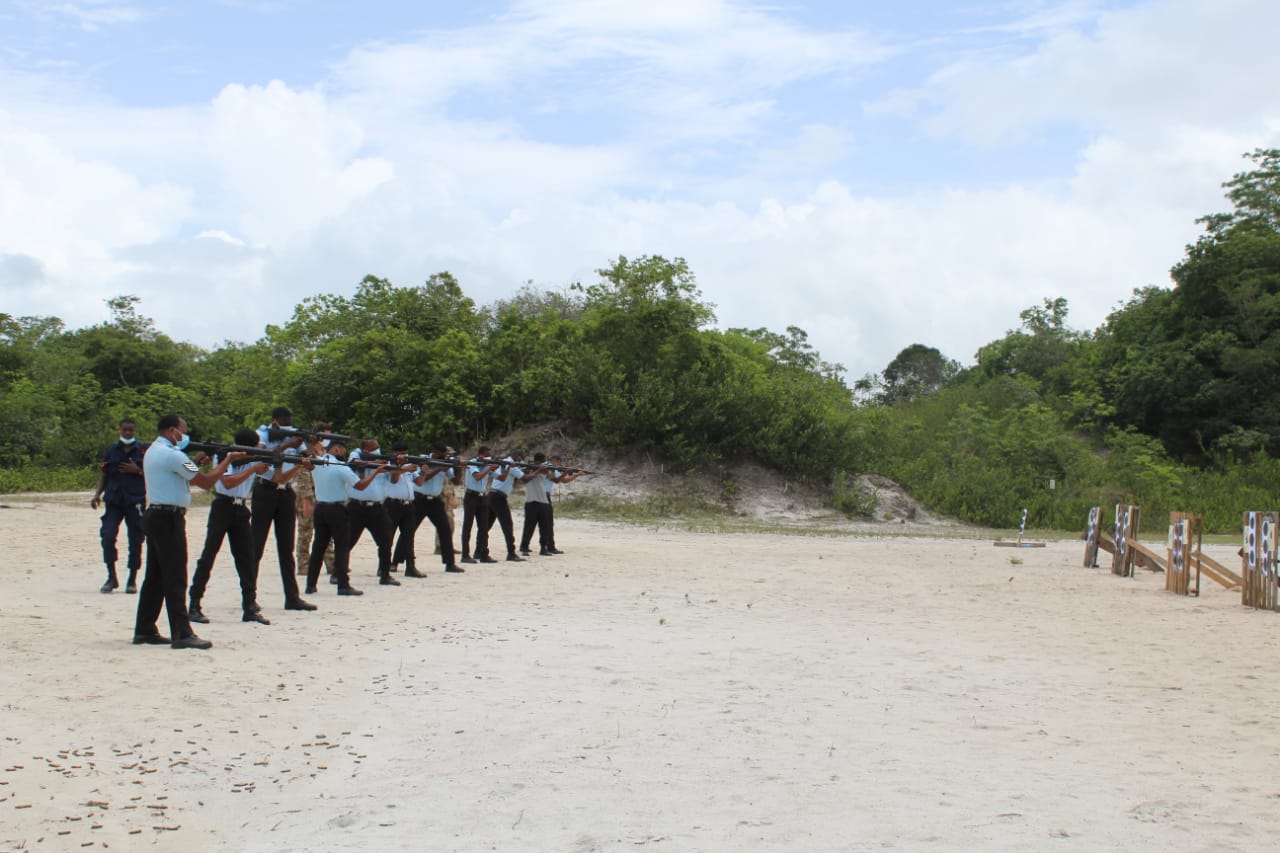 By Lisa Hamilton
Scores of Guyana Police Force (GPF) officers have been given the opportunity to improve their rifle marksmanship through Tradewinds 2021, being hosted in Guyana this year. On Friday at Base Camp Stephenson, the media witnessed a platoon of over 20 police ranks practising their aim with a lineup of targets.

Targets were placed between 5 to 15 meters away for basic training while there was also Close Quarter Marksmanship/Close Quarter Battle (CQM/CQB) training. The training also catered to aiming and shooting threats who may be wearing body armour.

Providing an overview of the preliminary rifle marksmanship instruction was US Army Sergeant – First Class, Anthony Calvi from the Florida Army National Guard.

“We want to emphasize on the basics to get that repetition going. So, they can try to master that skill, take everything they learned from here today back to their Unit and continue on practising…once they continue on with the basic drills they’re welcomed to add on some more advanced drills,” he said.

Asked whether he observed that the participating GPF ranks possessed commendable training prior to Tradewinds 2021, the Army Sergeant responded in the affirmative. He said that despite the use of different weapon systems, they were knowledgeable about the fundamentals.

Sergeant Calvi also commended the discipline of the participating GFP ranks and their keen attention to direction. “They’re shooting pretty accurate and we’re seeing that slight improvement as we’re addressing and demonstrating different drills,” he said.

“We’ve learned that, especially with their leadership, they’re very organized. We’re not trying to do all the commands, we’re just advising, so we tell everything to their Commander or their Sergeant and they’re very organized, very disciplined, they give the directions and everyone is on point.”

Meanwhile, GPF Sergeant Jermaine Semple said that the training has been very beneficial to himself and the ranks. “This will actually aid us to take a step further in terms of normal policing tactics, whether it be stationary or moving,” he said. On the specific platoon, there were approximately 22 junior ranks and one officer.

Other such courses are taking place in different parts of the country. Days prior, similar training took place with the Guyana Defence Force. While at Camp Stephenson, US Ambassador, Sara-Ann Lynch, who attended, was also given a go at target practice.

The US Southern Command-sponsored joint exercise sets out to enhance the collective ability of Defence Forces and constabularies to counter transnational criminal organisations and conduct humanitarian assistance and disaster relief operations.

Sat Jun 19 , 2021
Support Village Voice News With a Donation of Your Choice. ANSA McAL Trading Limited (AMTL) on Thursday donated 300 cases of Trinchloro Bleach to the Civil Defense Commission (CDC) to aid flood affected areas in Guyana. At the handing over, Head of the Consumer Goods Division, Anjeta Hinds noted that it is imperative for ANSA McAL to lend a helping […]