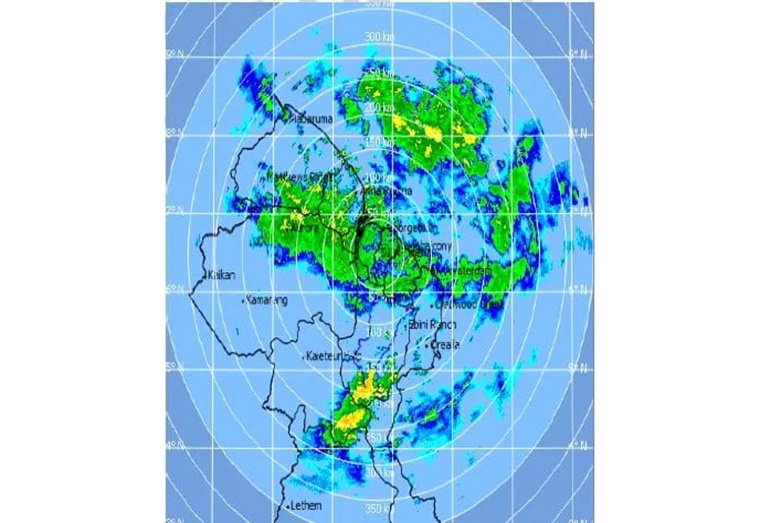 As Guyana experiences nationwide flooding, a National Flood Forecasting System (NFFS) was developed and is currently being operationally tested by the Ministry of Agriculture (MoA), Hydrometeorological Service.

This was disclosed by the United Nations Development Programme (UNDP) in a press release.

Under the Japanese Government funded project, “Strengthening Disaster Management Capacity of Women in Guyana and Dominica”, being implemented by the United Nations Development Programme (UNDP), this system was developed by the Operational Satellite Applications Programme (UNOSAT) of the United Nations Institute for Training and Research (UNITAR) in close collaboration with the International Centre for Environmental Monitoring  (CIMA) Research Foundation and the Hydrometeorological Service, MoA. This announcement was made by the UNDP’s Resident Representative, Jairo Valverde, at a simple virtual closing ceremony for this component of the project and to formally hand over the NFFS to the MoA.

“Today I am pleased to announce the completion of a National Flood Forecasting System, which is an important element of a National Flood Early Warning System for Guyana. This Flood Forecasting System, developed by UNOSAT in collaboration with CIMA Research Foundation, is currently being operationally tested by the MoA, Hydrometeorological Service over the period of this current rainy season all towards enhancing the capacity of the MoA, Hydrometeorological Service to forecast extreme flood events on a national scale,” Mr. Valverde said.

The NFFS was designed and calibrated for the prediction of extreme flood events that are caused by the overflow of rivers using meteorological and a nationwide hydrological model. Flooding caused by overtopping of manmade drainage canals along the coast of Guyana is however, not captured under this system. The NFFS is also linked to a two-dimensional hydraulic model piloted in four vulnerable flood-prone communities: Paruima (Region 7), Chenapau (Region 8), Lethem (Region 9) and Kwakwani (Region 10). As a result, the development of flood maps for these communities will be possible for extreme flood events only. However, the NFFS is designed to allow for its further development to capture areas that are not included under the current project.

Additionally, along with the technical set-up of the flood forecasting platform, capacity development activities were also implemented to ensure the sustainability of the NFFS, as well as enhance the technical skills and knowledge of key national stakeholders in the use of Geospatial Information Technology (GIT) for Flood Risk Management (FRM).

Minister of Agriculture, Zulfikar Mustapha, emphasized the importance of a NFFS. “The current floods have devastated significant portions of farmlands, killed livestock, damaged private and public infrastructure and is likely to have severe social and public health impacts that are still to be fully assessed. Recovering from this event will no doubt require Government and the Ministry of Agriculture to redirect resources to address the challenges posed by the current situation, affecting planned interventions. It is in this context that the development of a National Flood Early Warning System becomes extremely relevant to the development of Guyana,” said the Minister.

Similar sentiments were made by His Excellency Tatsuo Hirayama, Ambassador of Japan to the Cooperative Republic of Guyana and Mr. Lauro Rossi, Director of Early Warning Programme at CIMA Research Foundation.

Dr. Einar Bjørgo, Director of UNOSAT, expressed thanks to all partners for having the confidence to engage UNITAR to develop such an important flood forecasting system along with knowledge transfer and technical backstopping activities implemented throughout the project scope. Dr. Bjørgo has also advocated for more collaborative efforts to support Guyana’s Government on climate information and impact-based flood forecasting systems in the near future.

After the testing period, the NFFS will be fully operational and will provide support for timely warnings for extreme flooding events. This would be beneficial to vulnerable communities, especially those currently experiencing severe flooding.
Chief Hydrometeorological Officer, Dr Garvin Cummings, thanked the UNDP, UNOSAT and the Government of Japan for their continued support to the MoA,

Hydrometeorological Service and reiterated the Government of Guyana’s commitment to the sustainability and continued advancement of the NFFS. The UNDP and UNOSAT will continue to support the MoA, Hydrometeorological Service during the operationally testing period towards ensuring that the system is fully functional, and the services of this system are utilized to reduce the impacts of disasters and climate change.