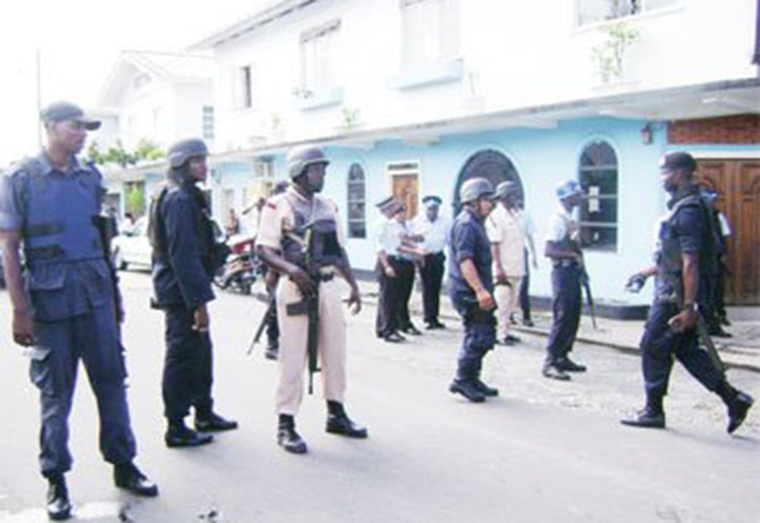 The Joint Services Council and the Ministry of Home Affairs have condemned social media posts which claimed that the new regional security support team announced by government will be another ‘ black clothes squad’.

The black clothes squad which was formally known as the Target Special Squad was notorious for allegedly committing a series of extra-judicial killings in the early 2000s. After much public pressure the unit was disbanded, but not after leaving a trail of bloodshed.
During Monday sitting of the National Assembly Members of the parliamentary opposition were shocked when it was revealed that the Irfaan Ali Government had made alot of headway in establishing what is called the Regional Joint Support Team and was seeking a whopping $249,967,523 to operationalise it.

However, Minister of Parliamentary Affairs and Governance, Gail Teixeira sought to allay fears that the new security unit being created by the administration will not usurp the functions of the established forces and  there is “nothing conspiratorial” about it.

In a statement the JSC cautioned against what it described as reckless and irresponsible social commentary which could have a damaging effect on society.

It must be further noted that the recent Supplementary Provisions approved by the National Assembly is intended to fund and support Joint Support Teams in the various administrative regions under the command of the Joint Services headed by Chief-of -Staff, Brigadier Godfrey Bess,” the statement read.

It added: “The allegation that a  senior Officer of the Guyana Defence Force is to head a ‘killing squad’ is outrageous. The JSCC reiterates its call for persons to be responsible and stay away from creating public mischief.”

Meanwhile, the Ministry of Home Affairs also commented on the issue noting that it observed with serious concern the contents of a Facebook post which suggests the “setting up of Death Squad and Black Clothes groups” arriving out of the considerations of Financial paper 2/2021 during the parliamentary session on Monday 14th, June 2021.
Appended to the post is an article from “Guyana News Today” which headlines “Exclusive: PPP secures @250million budget to resuscitation Black Clothes Death Squad”.

“It is apt to note that none of the deliberately malicious and incendiary statements were made during the consideration of the matter of the establishment of Regional Joint Support teams, either in presentations or even heckling from the benches.

I wish to condemn in the strongest possible terms, the malicious, deliberate, incendiary and delusional attempts to: bring the security forces into disrepute; to target individuals in those services; and to foment mischief and misrepresentations with respect to the policies and programs of the PPP/C government in its efforts to improve safety and security throughout Guyana,” the ministry said.

Teixeira revealed then that the Regional Joint Support Team was a new initiative decided on by the Defence Board back in April. Teixeira said the initiative involves both the Guyana Defence Force (GDF) and the Guyana Police Force (GPF) and aims to develop operational capacity in crime fighting. She said that the $249M budgetary allocation caters to the resources they need to be established and to function.

'Our suspension is illegal'