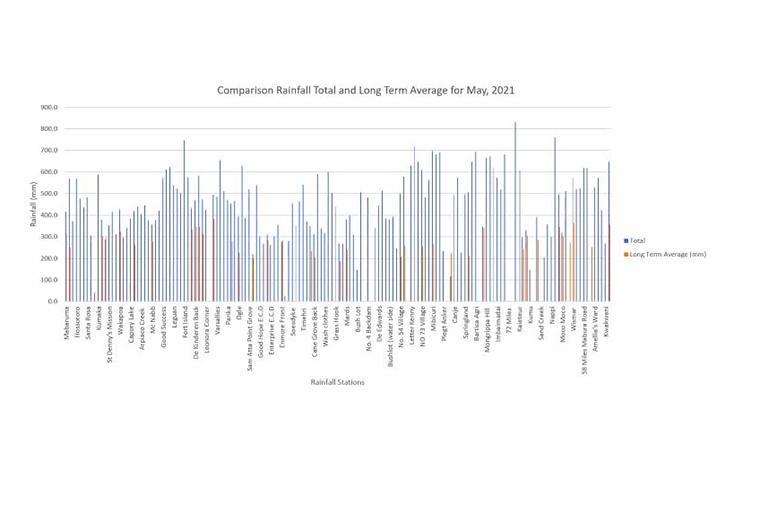 Chief Hydrometeorological Officer, Garvin Cummings said on Wednesday that Guyana should expect the current trend of excessive rainfall to continue up until July/August with upcoming tropical waves on June 17, 18 and 20.

Cummings provided this weather outlook along with the perspective of the past few months during a Civil Defence Commission (CDC) programme.

With the use of charts, he showed that there has been above average rainfall across Guyana from November 2020 to present, save for the month of February 2021. The data was gathered from weather stations throughout the country and compared the recent rainfall to the long-term rainfall average.

The Chief Hydrometeorological Officer said that Guyanese can expect such excessive rainfall to continue up until July/August. He therefore deemed the CDC’s operationalization of the National Emergency Operations Centre (NEOC) as appropriate.

Though the Hydromet Department is aware that Guyana should expect above normal rainfall during this period, Cummings said that it is nonetheless difficult to predict the weather.

“These are difficult times, forecasting weather is not easy,” Cummings said. He also reminded that on May 25, significant rainfall event led to serious electrical issues at the National Weather Watch Center which has since rendered the Doppler weather radar dysfunctional and it has remained dysfunctional since.

“It means that our now-casting capacity is severely restricted because we cannot observe the weather in near-real time. So, this is a humbug to the work of Hydromet really. Accompanying that event as well, we had power outages at the National Weather Watch Center, our telephone lines and internet also went down. Those were only restored on June 4,” he said.

Cummings therefore used the occasion to make a case for the relocation of the National Weather Watch Center because the facility is often compromised when there is severe weather.

For the next 4 to 5 days, Guyanese can expect Thursday, Friday and Sunday Guyana will be affected by tropical waves with rainfall between 2-4 inches and some areas experiencing more rainfall.

Wed Jun 16 , 2021
Support Village Voice News With a Donation of Your Choice. (BBC Sport) Paul Pogba is often accused of only baring his teeth when he plays for his country as opposed to his club. The Manchester United midfielder’s impressive performance as France won their Euro 2020 opener against Germany on Tuesday will have done little to dispel such suggestions. Pogba played […]