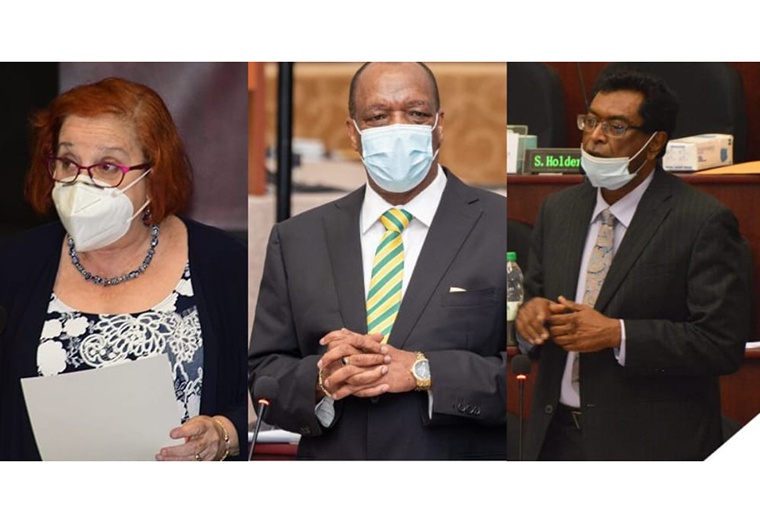 …allocates nearly $250M to operationalise it

Minister of Parliamentary Affairs and Governance, Gail Teixeira on Monday evening sought to allay fears that a new security body being created by the administration will not usurp the functions of the established forces and  there is “nothing conspiratorial” about it.

Members of the parliamentary opposition were shocked Monday evening when it was revealed that the Irfaan Ali Government had made alot of headway in establishing what is called the Regional Joint Support Team and was seeking a whopping $249,967,523 to operationalise it.

Initiating questions on the matter was Leader of the Opposition, Joseph Harmon who pointed to the $249M which was listed as to cater for the provision of additional resources to a Regional Joint Support Team.

“Is there a Regional Joint Support Team in the GDF? I’ve never heard about it. I don’t know whether the Minister can give some clarity to that because if we’re providing additional resources that suggests to me that there is already a team in existence,” Harmon questioned.

However, Teixeira revealed then that the Regional Joint Support Team was a new initiative decided on by the Defence Board back in April. Teixeira said the initiative involves both the Guyana Defence Force (GDF) and the Guyana Police Force (GPF) and aims to develop operational capacity in crime fighting. She said that the $249M budgetary allocation caters to the resources they need to be established and to function.

Opposition MP Ganesh Mahipaul then requested that Teixeira provide a list of the field materials and supplies that would be purchased with the sum. However, the Minister stated: “That will not be possible as a security issue. These are the Regional Joint Support Teams that will be in the ten Regions of Guyana.”

Further examination revealed that $2,100,000 will go towards rented buildings in various regions as Regional Operational bases for the Regional Joint Support Team. For security reasons, Teixeira said she could not disclose where in Guyana the buildings will be located.

This prompted Opposition MP, Khemraj Ramjattan to contend: “This is obviously crime fighting, this is not national security here. We cannot scrutinise and interrogate crime fighting?” Other members of the Opposition slammed their desks in support.

However, Teixeira argued: “How can one say where buildings are when you’re now starting?” She explained that she could not say where the buildings would be located because she did not have a list of such. The minister said that the $2,100,000 allocation was chosen on estimation for about 6-7 buildings for rent averaged at $300,000 each.

Questions from Opposition MP Jermaine Figueira then revealed that wherever there are Government buildings available for rent, these would be used and in cases otherwise, privately-owned buildings will be used.

Asked whether the teams would be permanently placed in the regions and whether they will have a different form of identification, the minister stated that she could not respond to the questions only to note that the teams would be mobile and able to change to another area if needed. She then justified the need for the rental of buildings as the simple need for a base for the operations.

Questioned by Opposition MP, Annette Ferguson about the number of persons that would make up each team, Minister Teixeira said she could not provide the information for security reasons.

More issues arose when the Opposition questioned what was catered for under line item ‘Other’ for which $84,358,400 was allocated. Teixeira said it would cater for uniforms and other items needed for operation.

However, Ramjattan then questioned: “This will be uniform that will be under the Police Act or the GDF because I want to know if it is crime fighting why are we shifting this thing out to the GDF? This is unconstitutional, you know?”

At that point, Harmon reminded the Committee of the large sum being allotted to the same and indicated that Minister Teixeira ought to know by now what the money would be spent on specifically.

Mahipaul also requested clarity on the type of crime the body would be fighting and whether its existence would be usurping the powers of the Guyana Police Force. But Teixeira responded: “This is about enhancing the capacity of the law enforcement agencies with the support of the GDF in fighting crime. Whether it’s narcotics, whether it’s other sorts of crime, it is there to work and support each other and therefore it is not to become a hysterical thing…there’s nothing conspiratorial about it. ”

She iterated that the GPF and GDF are covered by statues and there would be no interference in their functions with regards to usurping the powers of each other. President Ali announced recently too that his administration will be setting up a border patrol unit for which it needs to pass legislation to properly clothed.

Tue Jun 15 , 2021
Support Village Voice News With a Donation of Your Choice. ….another was circling but landed in Suriname with 400 kilos of cocaine A burnt aircraft was discovered in the Bissaruni trail some 12 miles east of Kwakwani, Minister of Home Affairs, Robeson Benn disclosed on Tuesday. According to the Home Affairs Minister, the aircraft was first seen circling the Bissaruni […]