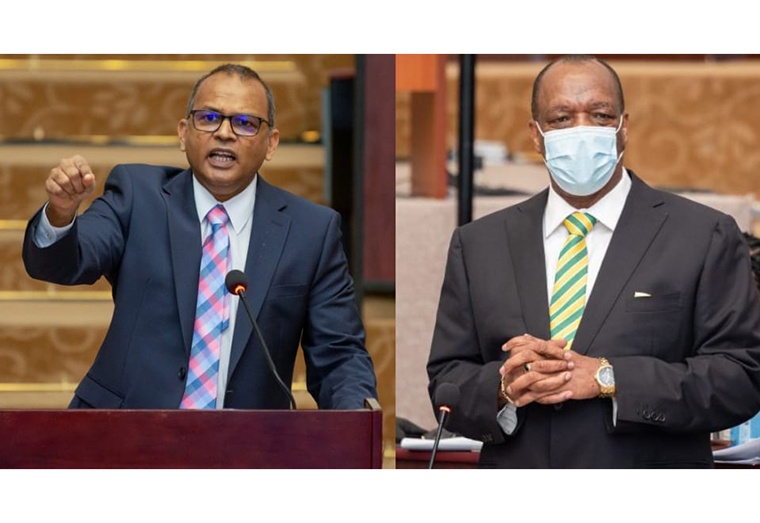 …Health Minister said availability is the issue, have to rely on “suppliers”

Questions from the Opposition during the Committee of Supply on Monday revealed that the Government has spent over $1.2B on 300,000 COVID-19 vaccines at a higher cost than PAHO/WHO outlines.

Based on questions to the Minister of Health, Dr. Frank Anthony raised by Opposition Member (MP) of Parliament, Dr. Karen Cummings, it was first revealed that the Government was seeking allocations for the purchase of 200,000 doses of Sputnik -V vaccines and 100,000 doses of Sinopharm vaccines. For the Sputnik-V vaccines, the Government paid approximately $957M and, for the Sinopharm, $326M.

Opposition Leader, Joseph Harmon later provided a breakdown which showed that, in other words, the Sputnik -V vaccines were approximately US$24 per shot and the Sinopharm at about US$16. Comparing this information with data from PAHO/WHO, he questioned why Guyana was paying more for the vaccines than the standard price.

“The report I read from the WHO called ‘Sizing up the shots’ lists these vaccines, the Sputnik at US$10 per shot and the Sinopharm at US$5 per shot. Would you say whether, in fact, this is a reasonable price we’ve paid?” he questioned.

The Health Minister said that the key factor is availability which therefore affects costs. He also noted that the cost for the vaccines includes transportation to the country.

Harmon also asked Dr. Anthony to provide figures on how many vaccines by type were purchased, what was the cost, the procurement method and from whom they were purchased.

It was disclosed that Sputnik-V vaccines were supplied from the United Arab Emirates (UAE) and the Offices of Sheikh Ahmed Dalmook Al Maktoum who visited Guyana in November 2020. Meanwhile, the Sinopharm vaccines were provided by the manufacturers, the Sinopharm/China National Pharmaceutical Group.

Dr. Anthony continued: “The method of procurement was direct sourcing and that is because there is — I think everyone in this room should be aware of that — vaccine scarcity and just to make it pellucidly clear we have had discussions with Pfizer to try to acquire vaccines for Guyana, unfortunately, as I said before, Pfizer told us that they will not be able to give us vaccines until 2022. We have also had discussions with Moderna to try to source vaccines for Guyana, we got a similar answer.”

The Health Minister said that discussions with Johnson and Johnson are still ongoing but the Government will be getting the same through “a supplier”. He said that regarding the three vaccines Guyana currently uses, there have been engagements with the Russian Sovereign Fund about sourcing Sputnik -V but the Fund has redirected the Government to license suppliers. For Sinopharm, he said direct discussions have been successful.

Meanwhile, Opposition MP, Tabitha-Sarabo Halley grilled the Health Minister on why the vaccines were not catered for in the 2021 Budget considering the Government was aware of the pandemic and that vaccines existed.

However, Dr. Anthony contended that certain vaccines were not yet approved by PAHO/WHO or had not yet completed clinical trials up to 3-4 months ago. He named Sinopharm as one of these vaccines. He said, at that point, the Government, therefore, negotiated to acquire vaccines free of cost or through COVAX.

Posed with more questions from Sarabo-Halley, the visibly upset Health Minister questioned: “How could we put it in the budget if we don’t know the source where we’re going to get it from? We want to make much out of nothing!”

During his responses, the Health Minister cautioned the Opposition against sending “ambivalent messages” to the public about the vaccines through its line of questioning which he said could contribute to vaccine hesitancy.

However, Sarabo-Halley slammed back: “It is all well and lovely for the Minister to stand up and ask us to be involved when they refuse to allow us to be on the Task Force and maybe you can answer that question. Why is it that they have not requested that the Opposition go on the Task Force so that we’d be better informed to actually speak with our people on the matter and not have to come to the National Assembly to ask questions.”

“All the information that APNU would need is being given to persons like Mr. Seeram who is on the National Taskforce. There’s nothing to hide,” the Health Minister argued.

Mon Jun 14 , 2021
Support Village Voice News With a Donation of Your Choice. …Region One and Six ranked highest Region Ten is by far the Region with the lowest vaccination uptake with only 13.57 percent of the adult population there taking their first dose of the COVID-19 vaccine. These figures were highlighted on Monday during questions to Minister of Health, Dr. Frank Anthony […]