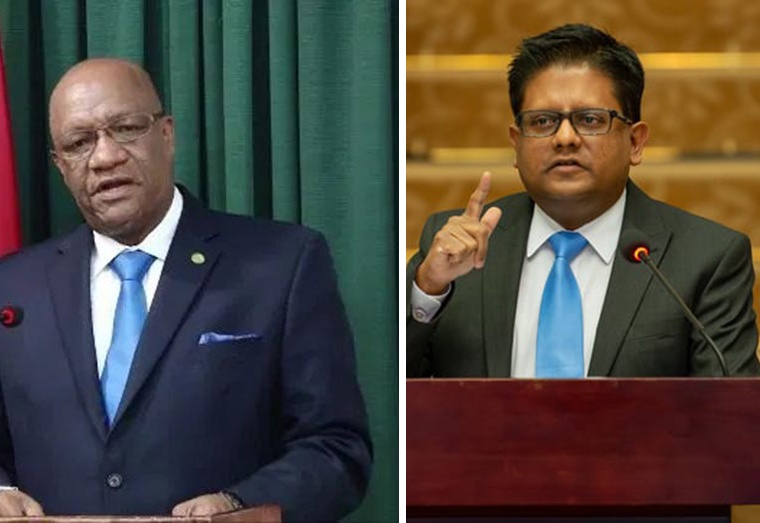 Addressing the National Assembly, Dr. Singh told the House that as at December 31, 2020 the Consolidated Fund was overdraft in an amount of $116.6B. When asked to compare the said period to the balance as of August 2, 2020 when the PPP/C took Office, the Minister noted that the figure then stood at $78.7B which marks a deterioration of $37.9B by December 31, 2020. This was revealed during questions for oral answers put by Opposition Member of Parliament (MP) Annette Ferguson. Dr. Singh then opted to provide a comparison between the 2015 balance left by the PPP/C and the 2020 balance left by the APNU+AFC.
He said: “It should be noted that if one were to take account for all Government accounts at the Central Bank, at the time that the People’s Progressive Party/Civic Government demited office in April 2015, Government was a net depositant (sic) in the Central Bank with $16B in aggregated deposits held in the Bank. By end of July 2020, sir, the end of the APNU’s extended stay in Government, Government has moved to a net overdraft position of $93B.”

Furthermore, he said that when taking into consideration the balance on all Government Bank accounts held at the Central Bank at the end of 2020, there was an overdraft of $128B.

He therefore told the House that the inherited overdraft as of August 2, 2020 was aggregated with other domestic debts; contingent liabilities issued;  borrowing contracted by public sector entities and supported by Government guarantees such as National Industrial and Commercial Investments Limited (NICIL); and Government’s accumulated indebtedness such as $12B owed by various Government agencies, for example, to the Guyana Power and Light (GPL).

“On August 2, 2020 when the People’s Progressive Party/Civic assumed office, if all of those debts had been aggregated, the then Government would have been in violation of the statutory ceiling on debts. It was as a direct result of this that the new Government had to come swiftly to the National Assembly to adjust the ceiling,” Dr. Singh said.

Meanwhile, in a press release shortly afterwards, Leader of the Opposition, Joseph Harmon accused the PPP/C of “vulgar mismanagement of the economy” through poor financial planning.
“A mere 3 and 1/2 months after the $383Billion 2021 Budget was approved in the National Assembly the PPP has returned with two financial papers seeking an additional $23Billion dollars. It has been revealed that mere weeks after Budget 2021 was approved the PPP secretly swiped almost $2Billion from the Contingency Fund. These monies have already been expended without any oversight or accountability by the National Assembly which the PPP is now seeking approval for after the fact,” a statement from the Opposition Leader outlined.

The Opposition Leader reminded that the Constitution and Fiscal Management and Accountability Act (FMAA) provide that for the use of the Contingency Fund, the Minister of Finance must be satisfied that the expenditure is “Urgent, Unavoidable and Unforeseen”.

He said that while it is obvious that some funds are needed to bring relief to Guyanese suffering as a result of severe flooding, the other issues for which the PPP seeks funding are unacceptable.
“It is clearly in breach of the provisions of the Constitution and the Fiscal Management and Accountability Act and belies a more sinister activity of corrupt spending with friends and cronies of the PPP,” Harmon stated.

He also stated that there has been “massive borrowing” and pressure on the domestic banking system financing including an increase in the overdraft at the Bank of Guyana, which stood at $139Billion in April this year compared with a more manageable $89Billion at August 2, 2020. He claimed that, in less than a year, the PPP has sunk the Guyanese people in more than $50B in “crushing debt burden”.

The Opposition Leader also questioned the “sudden” request for a $618million request to purchase an offshore patrol vessel for the Guyana Defence Force (GDF) and why this was not budgeted for in the 2021 Budget.

Harmon called on PPP/C to operationalise the Natural Resource Fund (NRF) immediately as the NRF Act provides for emergency funding in the case of natural disaster.

Mon Jun 14 , 2021
Support Village Voice News With a Donation of Your Choice. …Health Minister said availability is the issue, have to rely on “suppliers” By Lisa Hamilton Questions from the Opposition during the Committee of Supply on Monday revealed that the Government has spent over $1.2B on 300,000 COVID-19 vaccines at a higher cost than PAHO/WHO outlines. Based on questions to the […]