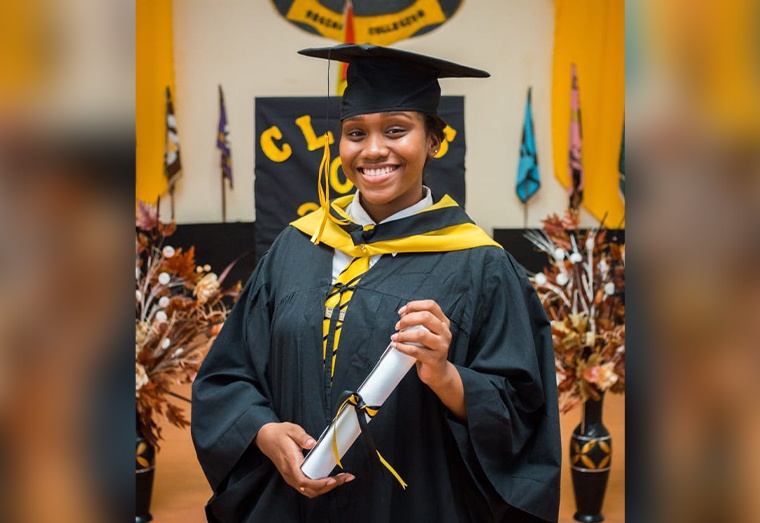 By Gabriella Chapman
Growing up in the small community, often hearing demeaning stereotypes about Bartica women, 19-year-old Reseda Hack says that she is determined  to live an exemplary life to reflect that brilliant, revolutionary women can be products of Bartica. This goal was set ever since the young woman was just in primary school, and she has thus far been exemplifying same.

In 2013, Hack was the top performer of Batica and Region Seven at the National Grade Six Assessment, securing a spot in the country’s top one percent, and was awarded a place at Queen’s College (QC). In 2016, she gained straight As at the National Grade Nine Assessment and placed in the top ten at QC. Two years later, she attained 19 subjects at the Caribbean Secondary Education Certificate examinations, and placed 8th in the country and first in the hinterland scholarship programme. In 2019, she obtained seven passes at CAPE, and copped the first position in the hinterland. And just last month, the young scholar was named one of the country’s top performers at CAPE for her overall performance during the 2019 and 2020 years at CAPE.

In an interview with Village Voice News Hack said that having a sound education was always at the top of her priority list as her parents always resounded its importance.

“As a child, my parents always emphasised and reiterated to me the importance and value of education and how it enriches one’s life. Since they were prevented from having access to education in their childhood, they always ensured that I had the best of it and completely understood its value,” she said.

Adding that, a balance of good character and high morals was also important. “Hence, they also taught me honesty, accountability and the importance of respecting every single individual regardless of their socio-economic, religious, political or educational status.”

Hack said her parents, Petal and Zulficarl Hack became her biggest inspiration to lead a successful life and she is forever grateful for their continuous guidance and support.

“I’ve always been intrinsically motivated to pursue my studies but as I grew older my inspiration came from my parents. Witnessing all that they sacrificed and how hard they worked to provide me with an education always pushed me to do my absolute best. Additionally, the hard work and commitment of my teachers pushed me to excel. If I could mention a couple; Ms. Williams, Ms. Benn, Ms. Bentham, Ms. Cole, Mr. Major  Mr. Carryl and Sir Deoraj.  Not forgetting the Ministry of Amerindian affairs continued belief in my ability, especially Ms. Daly,” she said.

Now that her years at Secondary School have come to an end, she has embarked on the next chapter of her life, which is to start her pursuit in becoming a Cardiothoracic Surgeon.

Owing to her childhood years being in the early 2000’s, a much less technological time, Hack said she thoroughly enjoyed playing doctor with her teddy bears and dolls. This developed an early passion to help those who are in need.

“I firmly believe that the greatest feat is service to others, thus, I’ve decided to pursue a career in medicine in order to offer quality healthcare to everyone that I’m permitted to meet. I’ve been accepted into a few universities of my choice, so I’ve decided on and am currently attending Texila American University… I aspire to become a Cardiothoracic Surgeon and philanthropist, specifically aiding women, the community of Bartica and children,” she disclosed to this publication.

Lending advice to other young people, especially those hailing from her community, Hack said “never doubt yourself. There is a greatness within you and once you make the necessary sacrifices, put in the effort and refuse to believe the negative that’s said about you and spoken of you; you can reach it. Secondly, I’d say to appreciate the people who surround you , they’ll prove to be the greatest support system. I’ve learnt that from my family, teachers and best friends.”

Mon Jun 14 , 2021
Support Village Voice News With a Donation of Your Choice. By Gabriella Chapman Craft Creations & Smiles is a small business created by a 22-year-old medical student, Renuka Tewari who is a lover of making people happy. Her business caters to the budget of all, providing the best customised gift boxes for your friends and loved ones on special ocassions. […]