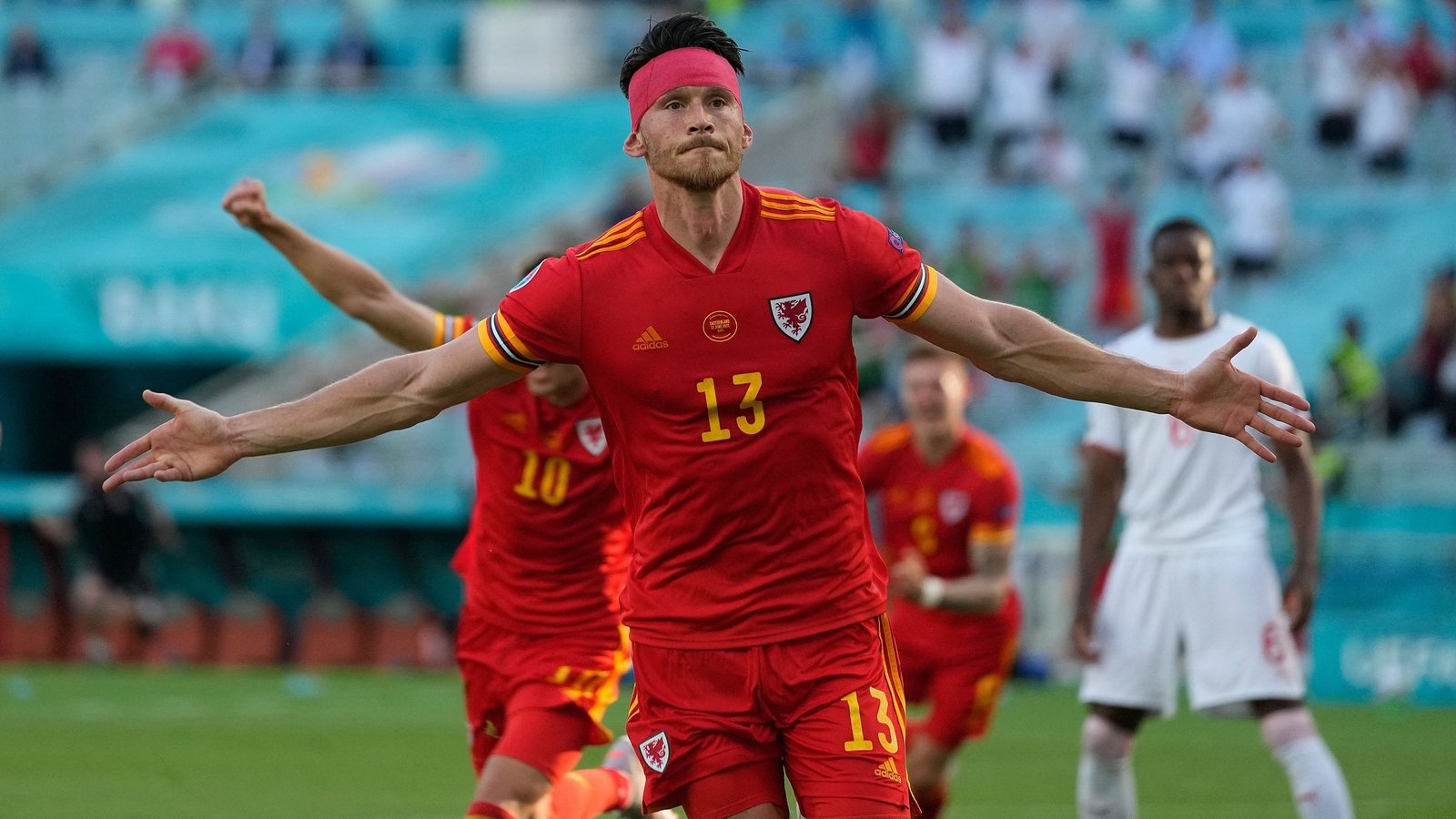 (BBC SPORT) Wales fought back to draw with Switzerland in their opening game of Euro 2020, as Kieffer Moore marked his return to the starting line-up with what could prove to be a vital equaliser.

In only his third start in nine matches under interim manager Robert Page, the Cardiff City striker was close to giving Wales an early lead when his header was superbly tipped over by Yann Sommer.

Switzerland took control of the match from that point and, after squandering several chances, they eventually scored as the impressive Breel Embolo headed in from Xherdan Shaqiri’s corner.

Wales were slow to improve from their sluggish start but, with 15 minutes left, Joe Morrell’s delicately clipped cross found Moore, whose flicked header into the bottom corner sent the small but loud pocket of Wales fans in Baku wild.

Those supporters then thought their hearts had been broken 10 minutes later as Swiss substitute Mario Gravanovic scored moments after coming on – but a VAR check disallowed his goal for offside.

Switzerland kept pressing for a winner deep into added time but were denied by a series of brilliant saves from Danny Ward.

Such was the intensity of the late Swiss pressure, a draw will have felt like a great relief for Wales, whose next game is against Turkey in Baku on Wednesday.

Wales had waited 58 years for their moment in the sun at Euro 2016. Absent from major finals since the 1958 World Cup, they marked their return with a mesmerising run to the semi-finals.

It was a summer which changed Welsh football forever and, while eight members of that squad remain, the mission statement this time is to create their own history.

This was a very different scene to France. Whereas 24,000 Welsh fans packed into Stade de Bordeaux five years ago, in Baku the pandemic meant the Red Wall only travelled in hundreds rather than thousands.

They made themselves heard in a sparsely attended Baku Olympic Stadium, which was made to feel cavernous as locals failed to fill their allocation.

Page recalled Moore as he reverted to 4-2-3-1, having dabbled without a conventional centre-forward in a 3-4-3 formation in the build-up.

The decision almost had an instant impact as a fine Daniel James cross found Moore, whose header was brilliantly tipped over the bar by Swiss goalkeeper Sommer.

That was as good as the first half got for Wales, who were outplayed by their well-structured and confident opponents. Gareth Bale and Aaron Ramsey were barely involved, while the defence struggled to contain Embolo.

But eventually Wales livened up, with Ben Davies and Ramsey going close before a short corner led to Morrell’s excellent cross for Moore, whose header justified his selection.

Switzerland have laboured under the burden of being the golden generation, with several members of this squad having won the 2009 Under-17 World Cup and finish as runners-up at the 2011 Under-21 European Championship – including Arsenal midfielder Granit Xhaka and Liverpool playmaker Shaqiri.

But despite qualifying for seven of the past eight senior finals – one as co-hosts of Euro 2008 – Switzerland had failed to go beyond the second round.

They were unfortunate not to be ahead by half-time, with Seferovic in particular wayward with his shooting. But strike partner Embolo was in better form, twisting and turning Wales centre-backs Chris Mepham and Joe Rodon. The pacy Borussia Monchengladbach player broke free from both early in the second half before seeing his shot saved by Ward and, from the resultant corner, he headed in. Embolo came close to adding a second after cutting inside from the left but the most painful of the near misses for Switzerland came in the closing stages, first with Gavranovic’s disallowed goal and then the several shots saved by Ward.