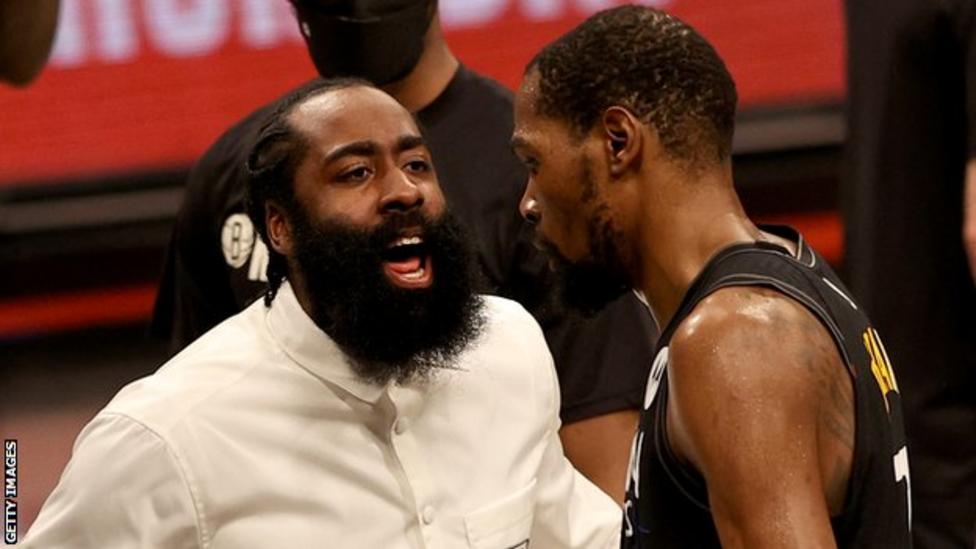 (BBC SPORT) Kevin Durant scored 32 points in three quarters to help the Brooklyn Nets cruise to an empathic 125-86 victory over the Milwaukee Bucks and take a 2-0 lead in their best-of-seven Eastern Conference semi-final series.

The Nets, without James Harden who had a tight hamstring, led by 49 points in the fourth quarter. The victory is their fifth double-digit win of the post-season.

Elsewhere, the Phoenix Suns beat the Denver Nuggets 122-105 in game one of the Western Conference semi-finals.

At Brooklyn’s Barclays Center, Durant, who registered his fourth 30-point game of the post-season, shot 12 from 18 on the field, alongside four three-pointers.

It is the fourth time in seven post-season games the Nets have shot at least 50% from the floor.

“I like our attention to detail – I like how we didn’t get a lot of plays perfect but we made second and third efforts,” said Durant.

“For the most part we just did what we were supposed to do, win two at home now we got to see if this game is going to travel on the road for us.”

Game three is in Milwaukee on Thursday night, with the series winners to face the Atlanta Hawks or the Philadelphia 76ers for a place in next month’s NBA Finals. Atlanta lead that series 1-0.

The second game of that series is in Phoenix on Wednesday night, with the winners facing the Utah Jazz or the Los Angeles Clippers in the Western final.

Meanwhile, the New York Knicks’ Tom Thibodeau was announced as the 2020-21 NBA Coach of the Year on Monday after ending the Knicks’ seven-year absence from the play-offs.

Tue Jun 8 , 2021
Support Village Voice News With a Donation of Your Choice. (BBC SPORT) Prime Minister Boris Johnson’s intervention in the England and Wales Cricket Board’s (ECB) suspension of bowler Ollie Robinson is “unwelcome”, says former England batsman Mark Ramprakash. Robinson has been suspended by the ECB pending an investigation into historical racist and sexist tweets posted in 2012 and 2013. The […]