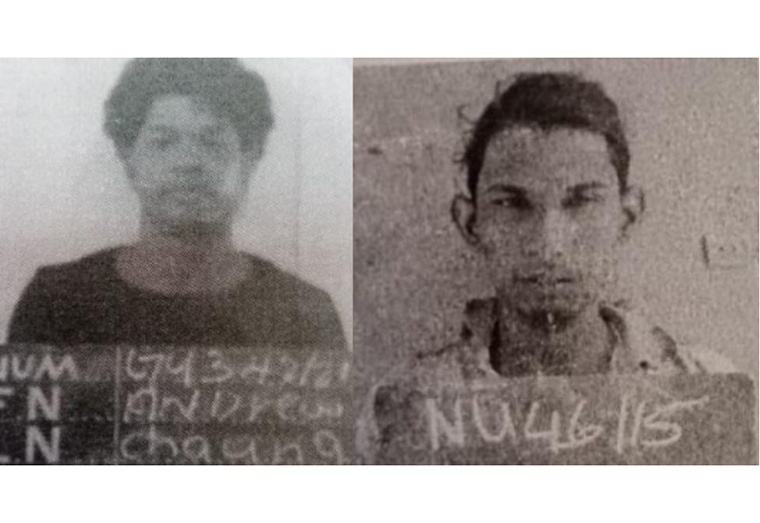 Director of Prisons (ag), Nicklon Elliot has notified the public that joint services are still searching for two prison escapees from the Lusignan Prison Quarantine Section, one of which was remanded for murder and the other for break and enter and larceny.

Wanted is 24-year-ol Shazam Kalil aka Boi last addressed at Lot 53 Sheildtown West Bank Berbice. He was sentenced to life in prison for murder on August 19, 2016 with parole after 24 years.

Also wanted is 26-year-ol Andrew Chaung last addressed at 73 New Road Vreed-en-Hoop, West Coast Demerara. He was remanded on April 20, 2021 for break and enter and larceny.

According to the Director of Prisons (ag), on June 8, 2021 at about 07:30 hours during the unlocking of the Lusignan Prison (Quarantine Section) which was supervised by the Duty Officer and four other ranks, it was observed that two prisoners were unaccounted for during the checking of the tally.

The matter was immediately reported to the Officer-in-Charge, Lusignan Prison, David Shepherd, Superintendent of Prisons (ag) who immediately ordered a roll call to confirm the information, upon conclusion it was confirmed.

The Emergency Action Plan with respect to the escaping of inmates was immediately activated. The Director of Prisons (ag) was informed who then informed the Honourable Minister of Home Affairs and the Joint Services Heads.

A Joint Patrol was established in search for the escapees. The public has also been notified that aiding and abetting of escapees is a criminal offence.

Wed Jun 9 , 2021
Support Village Voice News With a Donation of Your Choice. An employee of the Upper Takutu/Upper Essequibo Regional Democratic Council (RDC) was arrested along the Georgetown -Lethem trail on Tuesday after officials discovered that close to G$1M, which represents salaries for public servants in the South Rupununi , has gone missing. Reports are that the young man, who was only […]