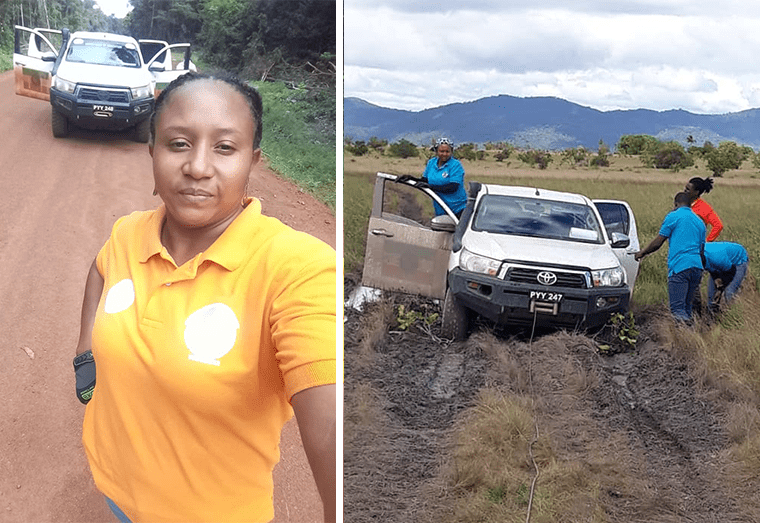 She is the only female driver attached to the Regional Democratic Council (RDC) at Lethem and while the job is challenging , Ulanda Jobe conquers the Rupununi roadways daily , rain or shine.

Ulanda , who speaks the Waphishana language fluently, told the Village Voice News that she has been driving for over 12 years. She can drive any type of vehicle , whether it has  manual or automatic transmission.  She is also skilled on the motorcycle. Her  stepfather taught her the art of driving as well as maintenance of the vehicle. These days she relies heavily on those lessons.

She said she worked with her parents within the region during her early years of driving, noting that she drove extensively in the Marudi Mountains area when she lived and worked there.

In 2019, she started working with the Ministry of Health at Lethem but she was attached mainly to the Ministry of Public Infrastructure office at the border town at the time. She said she was tasked with taking staff of the RDC  to undertake outreach and other exercises as well as routine trips in and around the region.

When the government changed in August 2020 she was placed at the Ministry of Health and it is there she encountered the more challenging aspects of the job. Ulanda said that her greatest challenge as a driver was not the roadway , but rather, leaving the town of Lethem for the villages with medical teams as the COVID-19 pandemic took its toll on the Rupununi.

“Well at first I was very scared because i didn’t want to be the one to bring COVID home to my family and everyone was scared. My husband was even more scared,” she said.

Nevertheless, she grabbed her mask, sanitising bottles, and other personal protective gear and boarded the vehicle to ferry the medical teams across the region. She said one of her more unforgettable trips was driving to the villages near Annai in the North Rupununi with the doctors and nurses to carry out tests on residents when the villages in that area saw high incidences of the disease. That was in August last year and she said she also went to Potarnau village in the South Rupununi where a number of COVID cases were recorded.

The route to the village includes crossing a shallow river but the water was too high for the vehicle to navigate. As such  she parked at the river bank. She said that tents were set up at the time to isolate the positive COVID patients. Those were scary moments, she recounted.

In September last, Ulanda said she travelled extensively across the region, ferrying medical staff to the South Central villages of the Rupununi. She said she kept thinking about her family at the time but she also placed her trust  in God. “But I made up my mind because, number one I know I’m strong with God by my side and I love my job so I  had to do it and it was a good experience because i know that I helped to save lives in that way,” she said.

She said her days would start  at 04:30hrs. She jumps out of bed, undertakes her motherly duties including preparing breakfast and she would designate chores to her children whose ages range from 9 to 20 years-old. She would then tend to her kitchen garden for at least an hour and then prepare for work.

“Most days they would have surgeries and medical trips and so my day is usually busy,” she said. She said she drives the ambulance in addition to the pick-up vehicles and her main duty these days includes a thorough sanitisation and inspection  of the vehicles given the ongoing health situation.

She said she after work she tends to her children and the garden and she then ventures into the kitchen to prepare dinner for her children. She said her elder children would play a supportive role during this time, noting that her husband, who is a police officer, works outside of the region.

Although she is of mixed race, Ulanda said she holds her indigenous upbringing dearly to her heart. She said she was born in Georgetown but when she was three months old, her mother took her back to her home at the village of Achiwib in the South Rupununi.

She said she was raised by her grandparents and according to her , her grandmother spoke little English. “My grandmother didn’t speak proper English, she spoke Wapishana and Portuguese,” she added. The village lies close to the border with Brazil and as such her grandparents frequented the neighbouring country. “Most of my indigenous knowledge I got from my grandmother and grandfather,” she emphasised.

During her teenage years ,her mother and stepfather wanted to give  her and her siblings  a better education. As such they moved to Lethem. She said she would return to Achiwib on multiple occasions during the year. While there, she makes “the best farine and cassava bread” and according to her, she is also a specialist in making the indigenous “parakari” beverage.”

Ulanda spent most of her childhood days on her grandparents farm at Achiwib and she noted that it is there she honed her skills cooking her favourite indigenous meals. ”Once you grow up in an indigenous community you suppose to know all of that,”she said with a smile.

Ulanda speaks the Waphishana language when she is with her family members as well as with other speakers of the language. She said she enjoys her moments conversing with her relatives who reside at other Waphishana villages.

She was approached in the past by persons who wanted to document her knowledge of the language and her ability to carry on her indigenous tradition. She said it is a cultural tradition which she proudly upholds.

Ulanda is also a rural constable and she is also a member of the Lethem Policing Group.